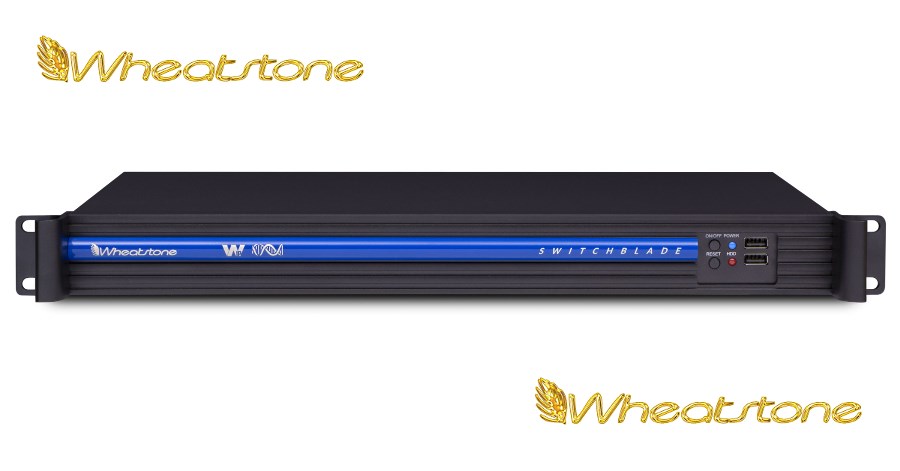 SwitchBlade is a 1RU appliance for the WheatNet-IP audio network that includes audio codecs, SIP messaging and ACI control interface. It is the first product of its kind to combine the power of AoIP logic control with SIP connectivity and codec bandwidth optimization to transport both high-quality programming and the control logic critical for full studio operation between sites.

“SwitchBlade is the missing link for connecting WheatNet-IP facility to WheatNet-IP facility from city to city or across the world. Not only will it carry the audio, it carries the control, which means you can send and receive router commands, automation control, and even fader levels across the two locations. This is a real game changer because Switchblade finally makes it possible to monitor each point of the audio chain and switch audio locally from Network Operation Centers around the world,” explained Wheatstone Sales Director Jay Tyler.

Previously, broadcasters were able to transfer high-quality programming across public or private links but had to leave logic control of elements back at the studio with the AoIP system.

SwitchBlade includes WheatNet-IP’s Application Control Interface (ACI) for remotely triggering events and elements in the WheatNet-IP environment, such as turning mics on or off, setting levels and adjusting EQ dynamics through software logic (SLIO) control. ACI is unique to WheatNet-IP and is used by more than 60 technology brand partners to seamlessly integrate automation systems, monitoring and clocking systems, and more into the WheatNet-IP audio network environment. Along with control commands supported via the WheatNet-IP ACI, specialized virtual interfaces for SwitchBlade can be developed using ScreenBuilder virtual development tools.

SwitchBlade has two ethernet connections, one for connecting to a SIP service provider or SIP-enabled PBX phone system and the other for connecting directly into the WheatNet-IP audio network. SIP is a messaging protocol used for establishing connectivity over public and private IP links and establishing interoperability between codecs. SwitchBlade comes with major codecs, including 256 Kb/s stereo Opus and G.711, for high quality program distribution between studios, networks, and affiliates or newsgathering or sports venues.

Once connected, SwitchBlade offers up to 24 modules that show up as sources/destinations in the WheatNet-IP NAVIGATOR software, and are therefore available on every WheatNet-IP console surface and monitor selector in the system. Each module can carry ancillary signalling embedded in the audio streams for equipment activation and control, and each can be controlled, configured and even reset without interfering with the operation of the other 23. In addition, each of the 24 modules can link up to any remote SIP-compliant Opus or other codec – or even another SwitchBlade – to enable broadcast-quality program contributions to be delivered direct to all channels on the WheatNet-IP network.

SwitchBlade can be used in conjunction with WheatNet-IP for a number of applications, including:
● Consolidating program operations for several stations scattered across a region.
● Live remote production, including high-quality programming and console/mic control between home studio and sports or concert venues.
● Sharing program and operating control between sister studios over an IP link.
● One-to-many STL codecs between one studio and several transmitter sites; 1RU SwitchBlade at the studio feeds two, four, six or more existing SIP-compliant codec units at each transmitter site.
● Transferring high-quality music between two facilities or from a cloud-based automation system over the common Internet.

WheatNet-IP is a complete IP audio network ecosystem of consoles, talent stations, I/O units, accessories and virtual tools. It includes online mixing and processing, scripting tools, audio drivers, and gigabit Ethernet architecture. SwitchBlade is the latest addition to the hundreds of software or hardware elements that can make up the WheatNet-IP audio network, as well as an additional 60-plus third-party add-ons, any or all of which can be connected together for any sized operation or purpose.

SwitchBlade and other WheatNet-IP audio network products will be demonstrated at Wheatstone booth N6806 during the NAB show.