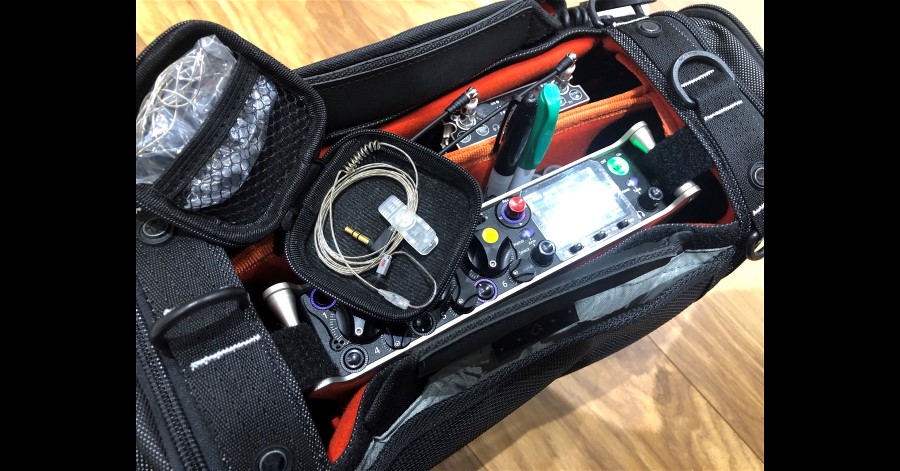 Copenhagen, Denmark. March 15th 2021 - Jono Cary, one of the UK’s most in-demand Sound Recordists and Production Sound Mixers, has switched to Bubblebee Industries’ Sidekick In-Ear Monitors because they are so comfortable that they can even be worn underneath headphones.

“Comfort is such an important factor, especially when you have a long day ahead of you,” he says. “Sidekick fits into my workflow perfectly and makes monitoring the IFB feed when doing ‘lives’ so much easier. I’m able to wear the earpiece all day without any pain or discomfort.”

Designed to be virtually invisible, Bubblebee’s Sidekick In-Ear Monitor features the world’s first micro driver solution where the driver fits invisibly in the ear canal, eliminating the need for acoustic tubes outside the ear. This gives it an extremely small and lightweight footprint and makes it a popular alternative to earwigs. Thanks to its very discreet profile, extreme levels of comfort and ability to deliver high speech intelligibility, Sidekick is rapidly becoming a vital piece of the communication jigsaw for all those working in film and broadcast, especially in live environments. With this IEM in place, the sound crew, presenters and talent on set can easily communicate with directors and sound mixers back in the studio while still hearing everything that is going on around them.

“The difference between Sidekick and other IEMs is literally night and day,” Jono says. “Normally on a live set, I’m listening to the feed from the gallery whilst monitoring my lav/boom mics from my sound recorder with headphones over the sidekick. The great thing about Sidekick is that it floats in the ear canal so it doesn’t block out all the other sounds around you when you have your headphones off.”

Jono Cary first came across Sidekick in 2019 when it was discussed pre-release by fellow sound experts on an industry Facebook group. At first, he wasn’t convinced that it was for him because it appeared too small and delicate.

“The cable looked potentially flimsy and I couldn’t believe it was durable enough to withstand the rigours of a live set,” he says.

Work commitments kept him busy for the rest of the year with a client list that includes Netflix, Amazon Prime, Channel 4, FIFA, BBC, Disney, Nike, Saatchi & Saatchi, Google, Microsoft, Sony Jono Cary is always in demand and rarely rests on his laurels. He is also a regular sound recordist for the BBC and ITV, and often handles live TV comps for shows such as Good Morning Britain and Lorraine.

In 2020, as the Covid-19 pandemic hit, Jono was seconded to ITV to work on various shows with presenter Andi Peters, host of Dancing On Ice, Extra and The Big Reunion. Now that he was back on a live set – and once again facing all the issues he’d previously encountered with In-Ear Monitors – he decided to give the Sidekick a try.

“Andi wasn’t happy with his IEMs either and wanted something more comfortable,” Jono says. “Also, seeing wires trailing down a presenter’s neck really cheapens the look of a show and he wanted to know if there was a better looking alternative.”

The Sidekick IEMs solved both of these problems and were an immediate hit.

“Neither of us could believe how strong they were,” Jono says. “I even tried to break the cable by pulling it with both hands, but it easily survived that test. Also, I wear headphones to monitor the radio microphones on set and I was able to wear them over the Sidekicks without having a wire digging into my ear. That was a real revelation! I’ve tried loads of earpieces in the past, and even tried DIY to adapt other earpieces but never found something that I could wear comfortably underneath my headphones.”

For Andi Peters, comfort and aesthetics were the deciding factor. “I’ve really enjoyed using the Sidekick,” he says. “Earpiece technology in TV hasn’t really moved on in 20 years but this new technology has been a tremendous game changer. It’s so lightweight that I’ve often forgotten that I’m wearing it. The sound quality is excellent and the cable VERY strong. I highly recommend it.”

Since investing in Sidekick, Jono has also discovered another advantage – using them on platforms such as Zoom when clients, especially corporate executives, need to conduct online streamed interviews for broadcast.

“It is very handy to be able to give the Sidekick, sanitised of course with a fresh ear tip, to the interviewee and have them hear the other side of the call via the earpiece,” he explains. “This means we don’t have to rely on audio coming through their computer and I can record crystal clear sound without bleed from the laptop speakers”

Having the blessing of satisfied customers is the best way to promote any product and Jono Cary is more than happy to tell his clients and fellow sound professionals all about Sidekick. “It’s a great little product, it’s super strong and I really like the accessories,” he says. “I would – and do - highly recommend it.”