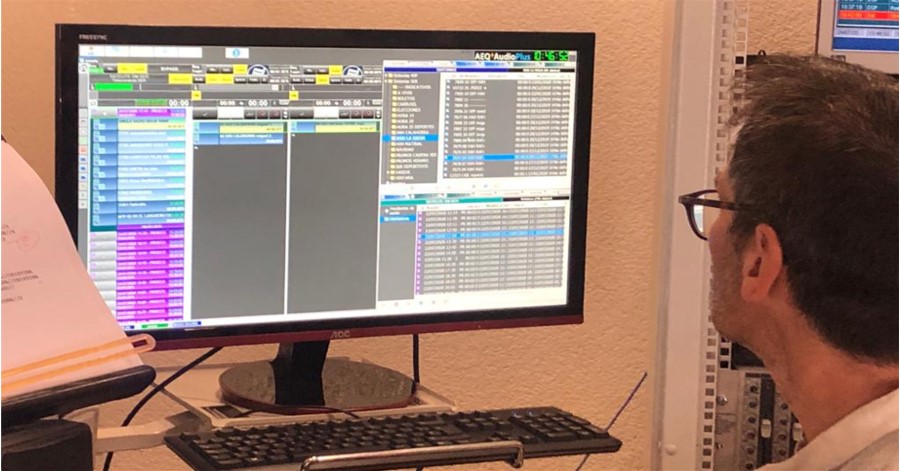 This System HIS is fully adapted to the Stations's operational need and is seamlessly linked to the Sales Management Software.

On February 25th 1933, the Spanish General Telecommunications Administration agreed to issue a broadcast license for the area of Logroño of a Radio Station with call sign EAJ 18 and the name “Radio Rioja” to Ismael Palacio. Today, this station is located at Avenida de Portugal, 12 in Logroño, the capital of the province of “La Rioja”. The station now also has two branch offices in other cities of the Rioja province. It is an independent broadcaster affiliated to the Cadena SER Networks, broadcasting the general programming of these Networks in AM and FM. Depending on the time of the day, it is providing its audience with the signals from the networks of SER and SER+, Los Cuarenta Principales and Cadena Dial.

This station has always been a reference station for news in the region and throughout its long history, it is has also been committed to regional sports and politics, counting on a very active editorial office. Bulletins are broadcast from the office while the preparation of important news stories continues.

For several decades, all public figures and social collectivities from Logroño and La Rioja have passed through their main studio in studio-control format.

Thousands of interviews and local and regional reports have also been produced from its self-controlled recording studio as well as national news stories in contribution for the SER Network headquarters in Madrid.

The news room is dedicating most of its time to provide content for the regional and local slots as well as contributions for Madrid. However, apart from the conventional SER and SER+ radio programming, there are other important sources of income with low production costs, such as musical products centrally produced at the company headquarters. Further, a high level of automated operation and local disconnections for indications, promotions and adds in addition to the prior, allows Radio Rioja to cover the expenses of infrastructure and to continue being the News station of reference that the Riojan society demands.

That’s why Radio Rioja has always paid attention to its Automation System, valuing its reliability, availability and good operation, and when renewal of the already installed system was due, they opened to evaluate the most common systems used in Spain.

During the presentation and evaluation of AEQ AudioPlus Radio Automation system, they discovered that it is highly operational and intuitive - easy to learn. Then, once they obtained and revised references from other Radio stations about the compatibility –both with the disconnection and synchronization commands that SER offers, and also with the scheduling and billing system that they were already happy to use for Ad insertion- Radio Rioja made one of the most difficult decisions that broadcast technicians and engineers can be faced with: to renew the automation system, substituting it by another brand.

AEQ has been developing and installing radio automation systems for more than 30 years. The experience gathered from the requirements of thousands of customers allows us to adapt to almost every need or way of operation. AudioPlus is a third-generation system, developed after Mar System and Mar4win. It’s designed to run on Windows operating systems and bases on SQL Server databases. It includes a self-installation wizard, its is compatible with professional, low cost, USB and virtual AoIP soundcards and provides a set of complementary editing and management tools, as well as links to all kinds of external software applications.

It also offers a remotely commanded playout module compatible with Cadena SER commands, and a module for exchange with external management software applications, both for advertisement traffic and musical programming.

Last, it has a file import module that is adapted to database formats used by different manufacturers. In particular, the format used by French manufacturer Dalet had already been used and debugged in previous migrations and worked like a charm, on-the-fly moving the audio files in a few hours while each file’s ancillary information was migrated to AEQ format.

After it was migrated, AEQ AudioPlus system automatically creates disconnections, and remotely commanded patterns and playout lists can be created. Thanks to its simple and intuitive user interface, the transition to the new system hasn’t really supposed any additional effort. The same person who traveled there to perform the migration trained the users on the new system’s operation in very few days. During these days, AEQ AudioPlus scheduling was done in parallel with the previous system’s.

The system includes four recording/playout workstations: one for each control or automatic playout station, a programming one (the one depicted in the image), and a high-availability server with a RAID disk system, everything connected over an IP network. During the same intervention, all the audio codecs for external retransmissions and program transportation were migrated to IP technology, so four Phoenix Mercury units and a Phoenix Venus were installed.

System pre-configuration and installation was performed by AEQ personnel, as there were some special tasks to develop, being an on-the-fly migration. Mrs. Raquel Cortés, responsible of Automation Systems in AEQ Technical Assistance Service, traveled there. During the same intervention, she installed the system, transferred all the audio files and data, and provided a training course to Radio Rioja’s staff. The support to this project has been carried out by AEQ Sales Area Manager Mr. Eduardo Guerrero.