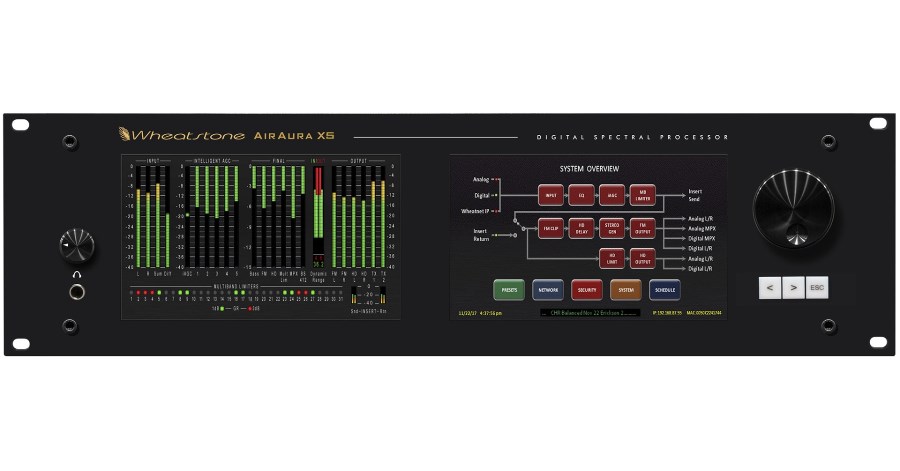 Designed for the needs of radio today, X5 includes, among other innovations, Limitless peak control as the ultimate solution to pre-emphasized audio plus Unified Processing for synchronizing across all processing stages.

New Βern, NC, USA - New this IBC conference, Wheatstone’s X5 FM audio processor was built from the ground up based on several new breakthrough technologies, including a new approach to dynamics control and pre-emphasis management.

Traditionally, pre-emphasis has been either managed by specialized limiting or carefully designed clipping that merely tolerated the pre-emphasis curve. This has been the norm for decades, until now.

Enter X5’s Limitless FM peak control technology that reconstructs the audio after pre-emphasis has been applied. The result is a cleaner, clearer high end; no more dull, “smeary” highs or “spitty”  audio.

X5 also leads the way with Unified Processing®, another innovation that allows the processor to share critical information between ALL processing stages. In the X5, the iAGC gain control, Dynamics and Limitless Clipper stages work together no matter which control a user adjusts. Changes are made automatically, in real time, for the optimum sound.

The X5 also includes a totally redesigned limiter. As part of the Unified Processing system, this unique limiter, designed as 31 independent filter banks with no crossovers to colorize the audio, works directly with the X5's Limitless Clipper, providing an audio blueprint for how the clipper should behave.

The X5 adds a number of other innovative features, including Live Logger, which documents X5 settings and activities, from remote logins to audio failover to preset changes. A redesigned bass processor and enhancement controls in the iAGC allow the operator to safely equalize audio for maximum consistency. This preserves the audio signature of the station, cut after cut, element after element.

Additionally, broadasters can now keep the processor at the studio and still maintain HD and FM audio in perfect alignment to the transmitter with the optional MPX SyncLink receiver. MPX SyncLink manages multiple audio streams to keep signals in perfect sync, preventing any possibility of the FM and HD audio getting out of alignment.

AES insert points are also available via X5’s PPMport. Users can now insert their ratings encoder into the processing system instead of placing it in front of the processor. This allows the X5’s specialized front end to deliver a steady audio diet to the encoder and increase the instances of watermark embedding. What’s more, the sonic transparency of the Limitless Clipper preserves the watermark for more reliable detection at the meter.

Many of the features Wheatstone has pioneered in previous models have been incorporated and improved upon in the X5 as well, including the legendary Multipath
Mitigation algorithm, composite processing system with selectable look ahead limiting or clipping, baseband192 composite AES connectivity, and a full set of analysis displays.

The X5 FM/HD audio processor will be demonstrated at Wheatstone stand 8.C91during the IBC conference in September.