On-Air in the UK: WorldCast Systems solutions selected by Purbeck Coast FM for their STL and transmission. 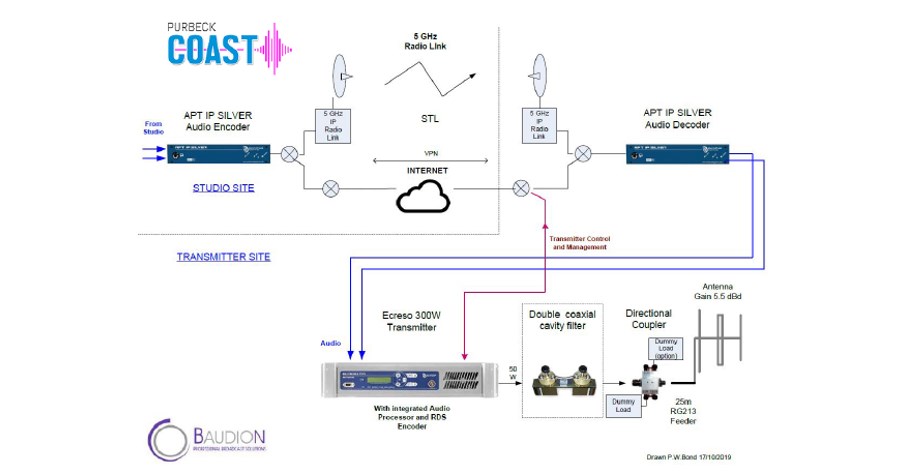 Dorset, UK, October 2019 - A young station, Purbeck Coast FM began earlier this year broadcasting from studios in Swanage, Dorset, to an audience of listeners in Swanage and the surrounding area. It is now one of several hundred low-power FM community stations in the UK serving towns, cities, and rural areas with music, news and information.

In late 2018, Baudion was approached by Purbeck Coast FM for a transmission solution to link the studios on Swanage Pier to their transmitter site in the Purbeck Hills some 4km away. In addition to the studio to transmitter link (STL) codecs, the solution provided by Baudion included the Ecreso FM 300W transmitter, external filters and measurement point. A WorldCast APT IP Silver encoder was installed at the studio and the APT IP Silver decoder at the transmitter site; the connectivity using two IP paths, one via a microwave radio link and a second via an internet VPN.

Although most UK community FM Radio stations use typical transmitter powers of around 25W, the UK regulator, OFCOM, recently permitted power increases where needed and where possible. It is in the perspective of this eventuality that Purbeck Coast FM installed an Ecreso FM 300W unit.

“As well as the Ecreso transmitter’s 300W output power rating, the appeal of this product was that the transmitter incorporates a dynamic RDS encoder, audio processor and backup audio player in one unit, all of which can be monitored, controlled and maintained remotely,” says Philip Bond, Systems Design and Support at Baudion. “The ‘Silver’ codec units offer a cost-effective, point-to-point audio-over-IP solution that gives reliable performance over routes with potential packet-loss. The WorldCast SureStream® technology, which compensates for glitchy IP paths, is supplied as standard with the ‘Silver’ series of codecs.”

The Purbeck Coast FM transmitter site is shared with other FM stations and in order to comply with the OFCOM RF requirements, WorldCast Systems is supplying an additional custom, tuned filter to remove unwanted intermodulation products.

“We are delighted about the confidence Baudion and Purbeck Coast have in our transmission solutions and we look forward to servicing more community radio stations in the UK with reliable, cost-effective and high-quality radio,» says Simon Daniels, Sales Manager Europe at WorldCast Systems.

Purbeck Coast FM began initial test broadcast transmissions in the early summer of 2019. Rather than use a separate play-out system at the studios, the Ecreso FM transmitter’s backup audio player was used as the programme source. This allowed the STL codec configuration to be monitored and optimised prior to the commencement of broadcasting from the studios.

As more and more community stations look to upgrade their transmission systems, the Purbeck Coast project illustrates how WorldCast Systems can supply all components in a broadcast solution, offering a modern integrated solution that is reliable and straightforward to install and maintain.

APT Codec range ramps up its performance with the 4.0 system release.
back to top