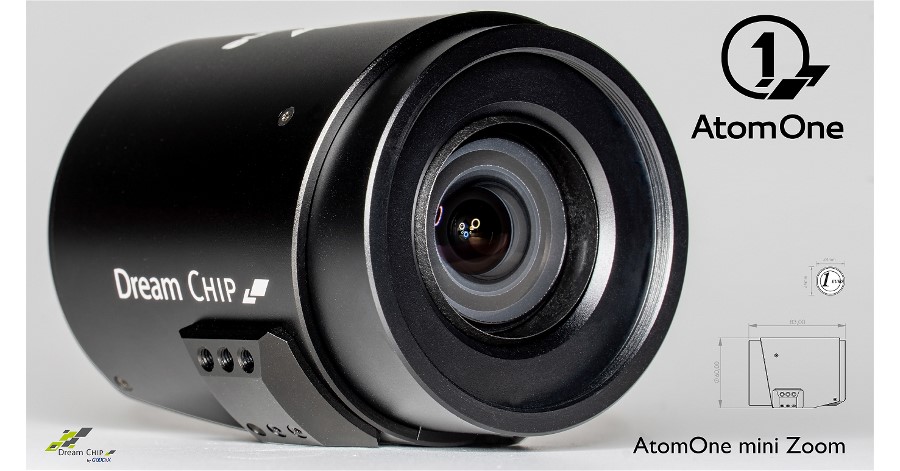 Garbsen, Germany - February 2022 - Dream Chip announced the release of its new AtomOne Mini Zoom camera, a ground-breaking miniature camera that now introduces Zoom functionality to an already impressive set of visual specifications. With dimensions of just 60x80mm and a weight of only 267g, the camera delivers crystal clear images, working on a rolling shutter basis with a 1/2.5” sensor, and allowing for resolution of up to 1080p60.

The Zoom functionality has been designed to facilitate more effective shot reframing – making the camera even more effective for deployment in unusual and creative locations. The base aperture stands at F1.6 – 2.9mm, providing for a wide angle 130° shot, and allows for the frame to be reduced to a 66° angle shot at 9mm. With such a miniature size, the camera can be added to an extensive range of locations without being obtrusive or interfering in the action; for instance, on race car bumpers and dashboards, behind goals, on nets, or right on the edge of action locations.

The goal of the entire AtomOne range has always been to bring audiences closer to the action, delivering shots that capture emotion and energy more effectively than traditional cameras which, by nature of their size, have to be positioned more neutrally. Now with the Zoom reframe ability, these images can become even more dynamic and provide yet another tool in a creative professional’s arsenal – allowing particularly for a focus on individual action components, facial reactions or emotive details. Indeed, production teams are able to maintain full creative control over all elements of the shot, as the AtomOne Mini Zoom maintains full iris control on a remote basis and can be colour matched with other cameras in the production setup using multi matrix colour support. The net result is immaculate, crisp, high-quality images which creatives can use to enhance their productions.

The decision to add a zoom functionality product to the already extensive AtomOne range – which includes super-slow motion and underwater models - comes from the overwhelming success that the original product met with in the market, and recognition that enhancements would yet further extend the range of applications for which the camera is suitable. The process was undertaken both as a result of ongoing innovation within Dream Chip and close consultation with existing customers – resulting in a product that is both responsive to the needs of the broadcast market, but also pushes the expectations of what can be achieved.

The new AtomOne mini Zoom is also notable for its camera housing, which not only uses materials selected specifically to give a robust structure and sleek look, but also moves all points of connection within the housing to reduce the risk of connection fatigue or failure. This is particularly important due to the fact that the miniature size of the camera means that it is often deployed in challenging conditions where there is a high risk of impact or vibration.

In additional to the Zoom function, Dream Chip have partnered with Bradley Remote in order to add the potential for pan-tilt functionality, turning the AtomOne mini Zoom into one of the smallest PTZ cameras on the market. Not only beneficial in the sports market, this adds remarkable potential to the camera in fields outside of broadcast – creating opportunities for much more discrete AV recording in commercial, entertainment, religious and educational settings.

Speaking of the evolution of the AtomOne mini Zoom, Christian Kühn, Product Sales Marketing Manager said: “The AtomOne range has always been about providing creative possibilities that can’t be achieved with larger cameras. Whether it be mounted on a net, a drone, or the front bumper of a car, our cameras bring audiences closer to the action and allow for the communication of excitement and emotion. Developing these elements is always the focus of our continued, intensive research and development process.”

He continued: “The new AtomOne mini Zoom is quite a remarkable addition to our range – and to the market - allowing even greater control and creativity. As with the rest of the AtomOne range, it’s a hugely adaptable and resilient tool that provides exceptional, undistorted image quality. We’re excited to see the creative applications that our customers find for the camera.”