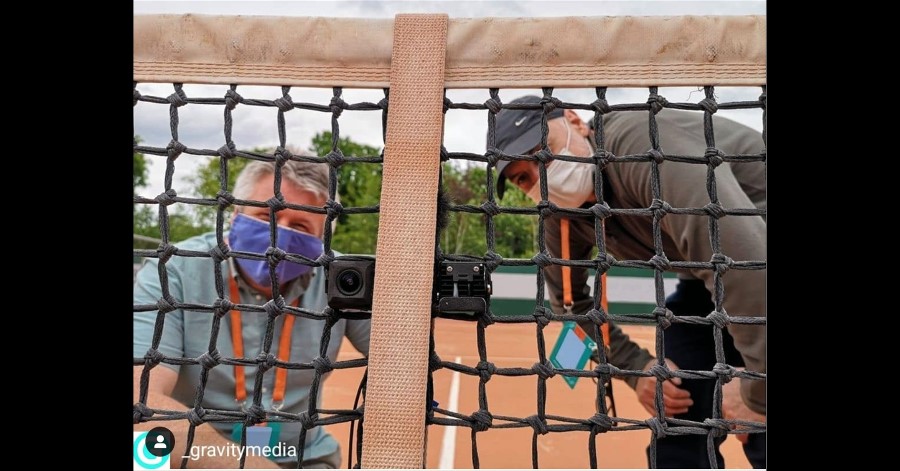 Garbsen, Germany - 20 September 2021 - Dream Chip is the leading producers of the smallest broadcast cameras on the market. Gravity Media’s integrated the AtomOne mini Air into their ‘NetCam’ to create a revolutionary way to serve the Sports industry. Gravity Media is a leading global provider of complex live broadcast facilities and production services. The result is a revolutionary new way of capturing in-the-moment sports action. The new integrated camera has subsequently been deployed at a number of global Tennis events - mounted directly to the net - with great success.

The technology collaboration represents Gravity Media’s desire to provide clients with increasingly creative and innovative means of broadcasting the excitement and action of live sports, and to deliver tools which allow producers to capture action from more involved positions, giving a clearer and crisper picture of the action and allowing for the development of a more compelling, dynamic and emotive narrative.

In order to facilitate this, the solutions developed need to not only integrate the highest specifications of lens and sensor technology, but also need to be unobtrusive and lightweight enough to endure extreme usage conditions without interfering with play. The NetCam with Atom One Mini Air integration is able to achieve this due to the fact that the Mini Air lens is little bigger than a one euro coin and weighs just 25 grams, but is capable of delivering 10-Bit Color Depth and 1080/60p/i output to a 1/2.5” sensor, with rolling shutter, S-Mount lens and HDR compliancy. The special housing for the camera built by Gravity Media and the use of leightweight but highly robust materials and exceptional craftsmanship ensure that the camera is able to endure the shocks of impact on the net without signal loss, where balls can hit at speeds of up to 117 mph.

By being mounted on the net, viewers are able to appreciate with greater detail than ever the tiny margins of precision for each shot, and with the wide angle lens are immersed in the action even more than if they had front-row seats. Moreover, application is not merely limited to the net, and cameras can be placed in other unusual positions – such as near ball boys, court lines and umpires – to give alternative, PoV perspectives on the action. The cameras integrate seamlessly with a wider production setup, allowing for a range of angles to be covered and managed through a single network backbone and controller.

Speaking of the integration, Tony Valentino - Head of RF & Special Cams for Gravity Media - said: “We were confident from Dream Chip’s reputation that they could help us to deliver real innovation for our clients, but having tested the Atom One Mini Air in the field, even our initial expectations were surpassed. We were overwhelmed not only at the quality and reliability of the image produced – especially in such challenging, rugged conditions – but also at how the clarity and unique positioning of the camera enhanced the overall production our clients were able to deliver. Indeed, they were eager to keep the camera on-site for longer than their initial one-day trial.”

Speaking for Dream Chip, Director of Sales Stephane Ducobu said: “We love to be able to work with innovators such as Gravity Media, who share our belief that cameras are creative tools first and foremost, and that technological development should always serve to enhance and expand the creative options available to broadcasters. Net-mounting presents a range of complex challenges from a technological standpoint, but Dream Chip’s focus on component quality, robustness and miniaturisation make Atom One cameras ideal for this kind of application.”