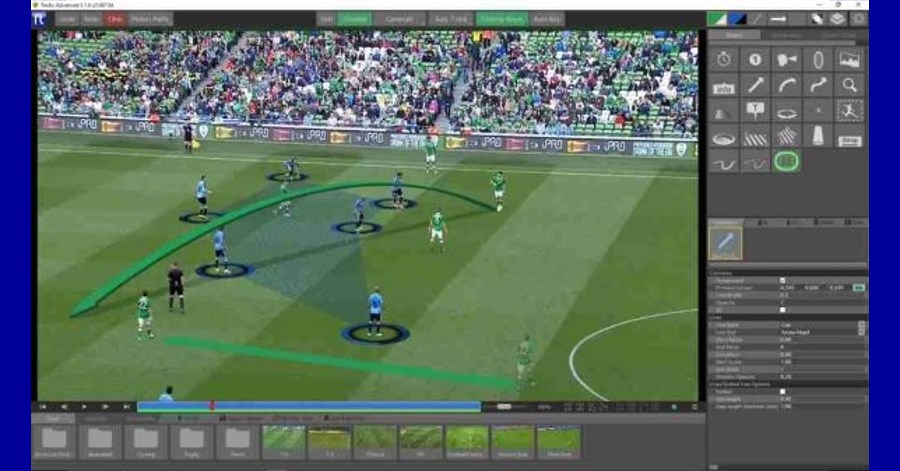 Tactic Advanced is RT Software’s next generation sports analysis and telestration system. Tactic Advanced has already been available for the Sports Professional market for a year, with orders received from some of the best known clubs and federations around the world, this NAB sees the launch of the full broadcast version. RT Software say that their years of experience working with Sports Broadcasters and Production companies has taught them that ease and speed of use is an essential part of any sports analysis system. As a result, they have made this an inherent part of Tactic Advanced’s design with features such as editable motion paths, composite graphics, automatic keying and camera tracking.

Flexibility has been built into the system with options for operator or presenter led control and for working with live video or files from a replay server such as an EVS, or Grass Valley’s Live Touch. In addition, users can easily change styles of graphics in interfaces to match their in-house style and guarantee their brand.

The new on-air graphics solution “Swift” is built on the heritage of RT Software’s expertise in live 3D graphics, and creates live on-air overlay graphics of the highest quality but with an intuitive creation tool that is easy to master and one that designers will feel at home with straight away. Suitable for all broadcast graphics such as text, clocks, tickers/crawls, tables and video/clip handling, any graphic can be distributed across the broadcast chain to be used live in the studio, in edits on the NLE timeline, to playout and even to production switchers.

As well as on RT Software’s own booth, visitors to NAB will be able to see both Tactic Advanced and Swift on Grass Valley’s booth (SL106) with Tactic Advanced controlling clips from a Live Touch Replay server and Swift providing integrated graphics to The Kula/Kahuna switchers, ICE channel-in-a-box solutions and Vibe/Rio NLEs.

Other product enhancements shown on RT Software's booth include the integration of the Unreal 3D renderer into their own proven Virtual Studio Renderer and dual channel capability for both their Swift and 3D graphic solutions.

RT Software’s booth and their full range of solutions will be on booth SL6125 at NAB Show, Las Vegas Convention Centre 8-11 April 2019.

Grass Valley Brings Vision of the Future of Media to NAB Show 2022.

EDIUS X 10.30 update with H.265 encoder, variable frame rate support and much more.
back to top