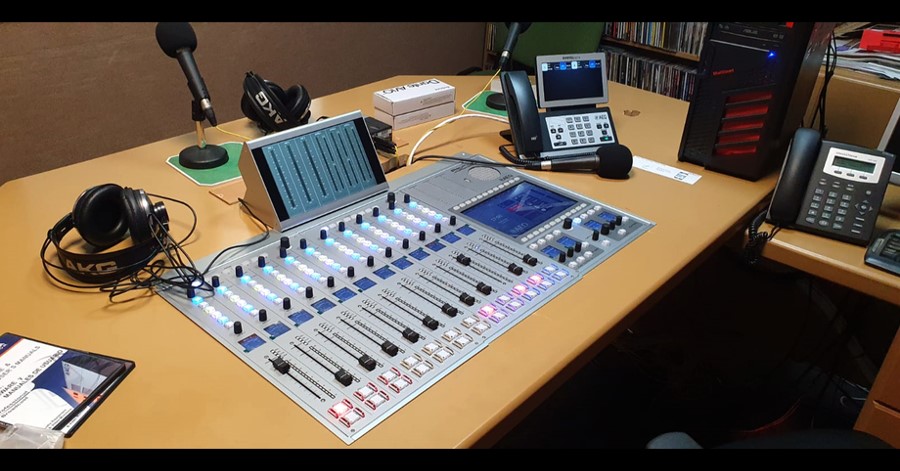 The local integrator Insertel Canarias won the public tender for the technical update of its studies.

Radio La Guancha is the municipal radio of the City Council of La Guancha on the island of Tenerife, Canary Islands, Spain. It was created more than 20 years ago. Its frequency is 107.2 FM and currently it is still a young radio. Its transmitter covers the north of the island of Tenerife and the south of La Palma, but the station can be heard over the internet anywhere in the world.

Recently, the City Council decided to modernize and update the technical equipment of the station, until now semi-professional, which is why it called the corresponding public tender, that was won by Insertel, the specialized company in the Canary Islands, based on the Atrium console and the Systel IP multiconference system over an IP audio network with Dante technology.

The station has two studios, the main one dedicated especially to live broadcasting, in control/studio format, and a second recording studio in self-control format. The established configuration allows the function to be exchanged between the studios, or even, with operational precautions, broadcast and record simultaneously from any of the two studios. This is done very simply by sending the output of each studio over the IP network to one input of the other.

The use of audio sources has also been made more flexible. Any audio source, be it a computer or a recorder-player or any other device: tuner, television set, etc. it is available to any studio by inserting its output into the Dante IP network via an AVIO adapter.

Thus, with all the necessary configuration flexibility, you only have to deal with the quality of the operation, and the Atrium consoles play a fundamental role there.

The AEQ ATRIUM console is specially designed for radio and television audio production and broadcasting, in work environments with the highest operational requirements. Manage up to 1000 channels of local or IP audio controllable through one or more surfaces, each with up to 96 motorized and pageable faders.

Developed with the operator in mind, AEQ ATRIUM presents great simplicity of use through a powerful set of touch screens, encoders, indicators and keys, which are pre-configured, and dynamically adapt their function to the context, avoiding unnecessary steps, and always keeping accurate information in view, so that the operation is simple and safe.

AEQ ATRIUM has been conceived taking advantage of the advantages that technology makes available to us at this time: IP audio systems allow the inputs and outputs, and the process and control elements, to be distributed in different pieces of equipment, sometimes very physically distant. It incorporates tools for the storage and instant recovery of scenes, the convergence of physical and virtual control elements, the automation of mixing and level adjustment, the transport of control inputs and outputs through the different pieces of equipment in a system, etc.

Each ATRIUM control surface can be completely customized. Thus, classic ways of working can be implemented, for example: each fader can have A/B configuration, or each channel can have direct access to sends to pre-defined buses, or the channels can be defined for bidirectional multiplexes, so that each user has the mix everyone except him.

The Atrium surface configuration for the recording control, has two modules of 6 pageable faders, a control module, and an additional touch screen module.

IP technology allows that while each surface is in the corresponding control, both motors are installed together in a single technical rack that covers all the equipment of the station. This allows for simplified wiring and ease of maintenance.

The engineering offered by Insertel a la Guancha is totally innovative: Each console engine only incorporates a card with 64 inputs and 64 outputs to the Dante network. Thus, all the equipment, provided with Dante AVIO IP adapters, are connected to the console engine through Dante inputs and outputs. In addition, the control surface has a Dante adapter to input the signal from the talent's microphone, in self-control work mode, into the network, and output from the network to the control headphones and CUE loudspeaker.

The consoles are complemented by the virtual ATRIUM software application that allows remote operation from a PC located anywhere with internet access. This allows programming to be carried out from the user's home, in teleworking. This option is also used for remote maintenance.

The Systel IP Basic telephone system has 8 external lines enabled (expandable to 16) and the possibility of using 4 internal telephones. It has been equipped with a control terminal and Systelset+ operator telephone set for the ON AIR studio. It can share lines with the recording studio, using a conventional IP phone and the free Systel IP Classic software application for the recording studio operator.

This same software application installed in the ON AIR studio, allows users to assign Systelset+ at any time to the studio where they work more intensively. Currently, existing conventional lines are used, that are converted to VoIP through gateways. Intensive use of the system with native IP lines is planned when the City Council replaces its telephone service with a VoIP system, offering IP lines to the Radio.

The technical director of Radio la Guancha, Iván Núñez, declares: “Our radio is already a mature station that required professional facilities. IP technology gives us the highest audio quality and great flexibility to evolve for the next 20 years”.

Insertel's technical director, Enrique Reyes, says: “We had installed many AEQ equipment, but with both Atrium and Systel IP it is the first time. We have been impressed with the great operational power of both devices”.

The entire project has been led by Insertel Canarias with the support of AEQ's commercial manager for the Canary Islands, Mr. Bernardo Saiz, in coordination with the technical services of Radio la Guancha.

Their continuous growth and technological renewal has allowed them to remain at the forefront of the sector as a reference integrator in the Canary Islands and offer a quality service.