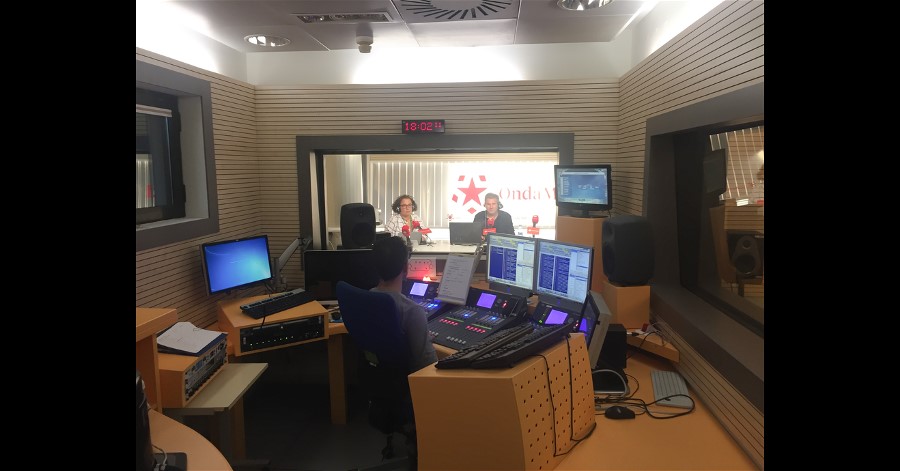 Onda Madrid was the first radio station installed by AEQ, back in 1985. Since then, we have always helped them to keep their technology up to date.

Onda Madrid is a public radio station run by the Autonomic Government of the Community of Madrid, Spain. This station is integrated into the Madrid Radio-Television group and has been affiliated to the FORTA association since it was created. News oriented to the region’s population have always predominated in their programming, together with local and regional sports contents. Onda Madrid started broadcasting on 18th February 1985 from García de Paredes street, right in the center of Madrid. This station was installed by AEQ using the first BC 2000 analogue consoles.

Onda Madrid moved to its current facilities in the Image City and performed all technical updates throughout more than 30 years counting with AEQ equipment, project designers and installation services. It has many mixing consoles, audiocodecs and even radio automation systems as part of their technical equipment inventory, studios and OB vans. Two years ago, Onda Madrid installed a new AEQ ARENA digital mixing console and a Visual Radio system into the main studio.

Now they have just finished the most important technical update since they moved to City of the Image more than 20 years ago, by incorporating an AEQ BC-2000 D ROUTER audio matrix with AoIP connectivity, updating all their digital mixing consoles in order to also support AoIP connectivity, and including a new AEQ SYSTEL IP 16 VoIP broadcast phone system with a pool of PHOENIX STRATOS audiocodecs -all integrated into a new software which unifies the control of broadcast telephony and audio routing for these audiocodecs.

Furthermore, an AEQ ARENA digital mixing console has been installed in the Recording Studio 1, replacing the AEQ analogue console which has equipped it for more than 20 years.

ARENA consoles at the Continuity, Recording 2 and Recording 3 studios have been updated to include an Audio over IP link with 64 inputs and outputs.

It is complemented by three AEQ NETBOX 32 AD Dante AoIP interfaces: one for additional routing of the central control and link rooms, a second one to provide booth connectivity and the last unit is kept as a backup. Each NETBOX 32 AD connects 32 AoIP inputs and outputs to 16 analogue and 8 AES/EBU digital stereo I/O.

This system is quite productive, based on a double-routing architecture, corresponding to the AoIP network and the AEQ BC-2000 D.

Steady inputs and outputs which don’t require processing are established between the different ARENA consoles, the NETBOX interfaces and SYSTEL IP broadcast phone system just in the same way as it would be done using a patch panel, but using Dante Controller software.

ARENA console’s important inputs and outputs requiring processing, mixing, silence detection, to be displayed in VU-meters or to be switched in blocks –automatically, according to a schedule or in response to a command by the software or console’s programmable keys- are routed through Dante Controller to the 128 BC-2000D ROUTER Audio over IP inputs and outputs, where they are processed, mixed or distributed according to programmed actions or commands executed in each user’s view in AEQ BC-2000D RTC software.

The communications system includes support for IP telephony and ISDN / IP audiocodecs, which are controlled by a unified software application developed just for this purpose.

On one hand, in the Central Control Room, there is an AEQ SYSTEL IP 16 system providing 16 voice over IP lines and supporting four AEQ SYSTELSET+ communications terminals (which include an IP phone and a touch screen running the communications control software). These have been installed in the Continuity Studio and the three recording ones. The 16 available phone lines can be dynamically assigned among these studios as required by each of them at any particular moment.

On the other hand, the system also includes 10 AEQ PHOENIX STRATOS dual audiocodecs supporting ISDN and IP connectivity. They can be assigned to the creation of permanent links to transmitter centers, to external studios and to OB vans.

Eight workplaces have been licensed for this unified communications software. It allows for the management of the audiocodecs and the IP broadcast telephony system from a single screen. This way, each user can operate the external links using audiocodecs and prepare the phone calls for a studio, –acting as a producer, supervisor or developing a combined function depending on his access rights-.

The deployment has been completed with ten AEQ ALIO external reporting systems with IP connectivity, each one provided in their own transportation case which also includes a battery system and router/modem for autonomous connectivity over 3G/4G mobile IP networks.

The complete project has been leaded by AEQ Sales Manager for Onda Madrid, Mr. Bernardo Saiz, in coordination with Onda Madrid technical services.