New AEQ products were exhibited at the 2019 NAB Show. 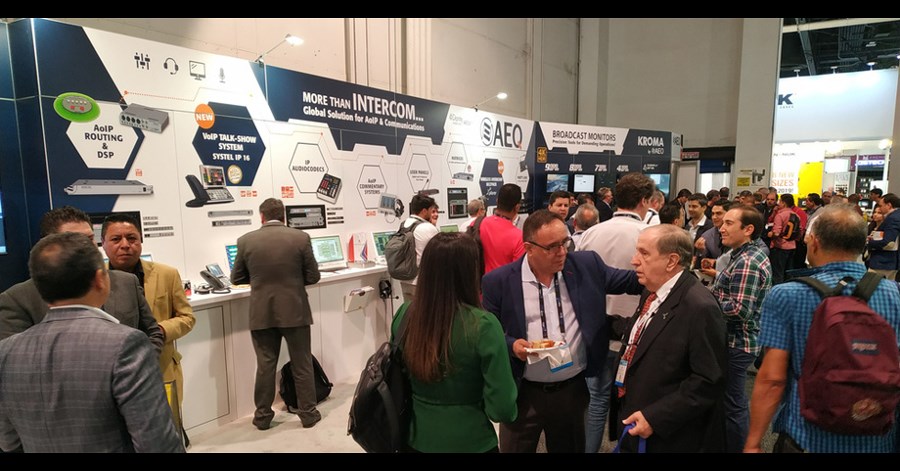 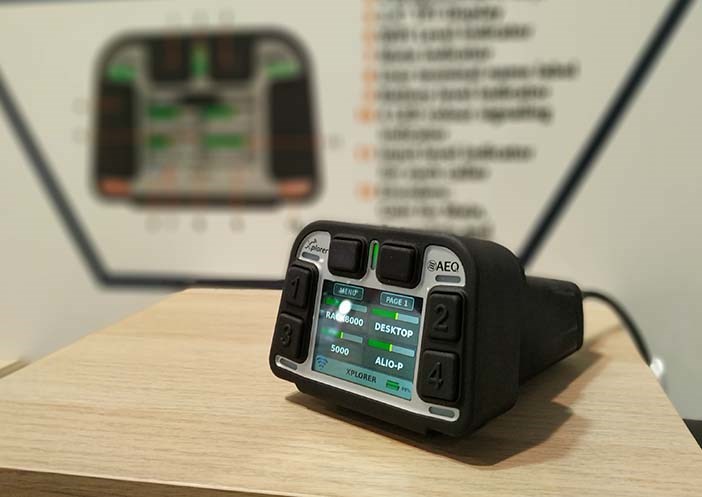 The Xplorer can be part of a system based upon an intercom matrix or as a terminal for a Party-Line system without the need for a matrix.

WiFi connectivity simplifies installation, start-up and maintenance of the system as the Wireless technology following the worldwide standards for implementation. It even allows the use of existing wireless networks to be used to service these terminals.

Using managed access points, the "roaming" function is activated, which avoids communication drop-outs when moving through the entire coverage area.

All round the multifunction screen it has 4 quick access keys and another two for mute and page or menu. The Keys are labelled through the display that also shows, among other things, information regarding the audio level for each destination/origin, battery level and WiFi signal.

Xplorer has a recording playback function for the last 30 seconds corresponding to the last call or communication to the terminal.

The belt-pack can work as a client for AEQ Crossnet, Conexia and TH5000/TW5000/IL5000 Intercom matrices

In this mode, each key can activate any of the following commands: Talk, Listen, Talk & Listen, Remote One Way, Remote Both Ways, Remote Volume and Dial Call.

When connected to any of the Intercom Matrices mentioned, the Xplorer will coexist with 8000 series wired user panels, and also with terminals using the Xvirtual application on iOS and Windows operating systems, such as iPad, iPhone and PC.

Xplorer can also work in Party-Line mode, as a terminal for the Kroma [email protected] system, with 4 channels and up to 28 devices, without the need for a central matrix.

The Belt-pack has dual volume control to give direct access to the level adjustment of the main interlocutor, differentiating it from the rest.

Its dimensions and weight are reduced, it is protected from bumps and splashes, it can be attached to a belt, or hunged from a ribbon, to be used as a shoulder bag. Its antenna is internal, of great gain.

Xplorer can be supplied with open or closed, mono or binaural headset.

With autonomy more than enough for a working day, The terminal is recharged in a multi-charge base with quick docking charge connection.

In short, a reliable, flexible, comfortable and robust wireless system to complement all types of intercom systems both in television production and in other professional and industrial environments.

The SYSTEL IP System is constantly being advanced and improved and is receiving new control elements such as the operator terminal SYSTELSET+, the SYSTEL IP 16 engine and the SYSTEL IP TV application.

SYSTELSET+
Is a control terminal based on a touch-screen IP phone and running a new configurable control application. It adapts to the most diverse operating requirements, especially for talk show and technical coordination.

The SYSTELSET+ features are largely appreciated in confined spaces (it only takes a surface of 26 x 17 cm, less than many other telephones), self-control rooms or when producing programs with a minimum of staff and where calls are not the most important part of the program.

The control terminal has 8 function keys apart from the standard 12-key telephone keypad and the touch screen. It allows for calls being dialled or accepted, placed on hold, cued/screened, send and return levels to be adjusted. Calls can of course also be placed “on-air”, locked on air or dropped. The operational mode can switched at any moment between “call queue” or several calls on air simultaneously - multiplexed. The queue is built on the lines themselves with an indication of the next call to be placed on air. SYSTELSET+ also allows for the management of a call book and call scheduling directly from the terminal. Lines can be shared between different programs and the layout adapted to the number of available lines at each moment, thus making the best use of the phone’s touch screen.

Its capacity is multiplied through the menu of options and special configurations, with the possibility to activate options depending on the program that the system will service: automatic picking up of calls, rejection of incoming calls, sequential aggregation of calls to a an on-air multi-conference, the dropping of a call when the consecutive call is being placed on-air, the simultaneous screening/cueing of all active calls, adjust levels, etc.

You can also customize the operation of each equipment with options such as: silencing the ring, sequential call attention, sending calls to the queue after cueing/screening, automatic selection of outgoing line, direct access to on-air, etc.

For further adaptability, there is an Advanced Settings menu, with options such as: labels and control buttons with the typical regional terminology, the ability to swap between studios or close the program.

All this provides great operational flexibility, both for inexperienced talk-show users and those with experience and accustomed to working certain ways.

SYSTEL IP TV
We also present SYSTEL IP TV, a client application that facilitates the external routing of intercommunication and coordination systems in television production centers and similar environments. Among others, it enables and provides the following functionalities:
- To establish and receive IP telephone calls including the caller ID of the correspondent. It also allows to register new contacts in the phone book.
- Allows accepting incoming calls manually or automatically, label calls, put them “on-air” or leave them in a multi-conference group.
-Talk to all lines separately or, alternatively to all the group members at the same time.
- Visualize and change the input and return levels for each of the lines and the levels of send and receive through the handset or headset combination with which calls are being handled.
- Visualize the status of each of the phone lines and how/where these are being routed. 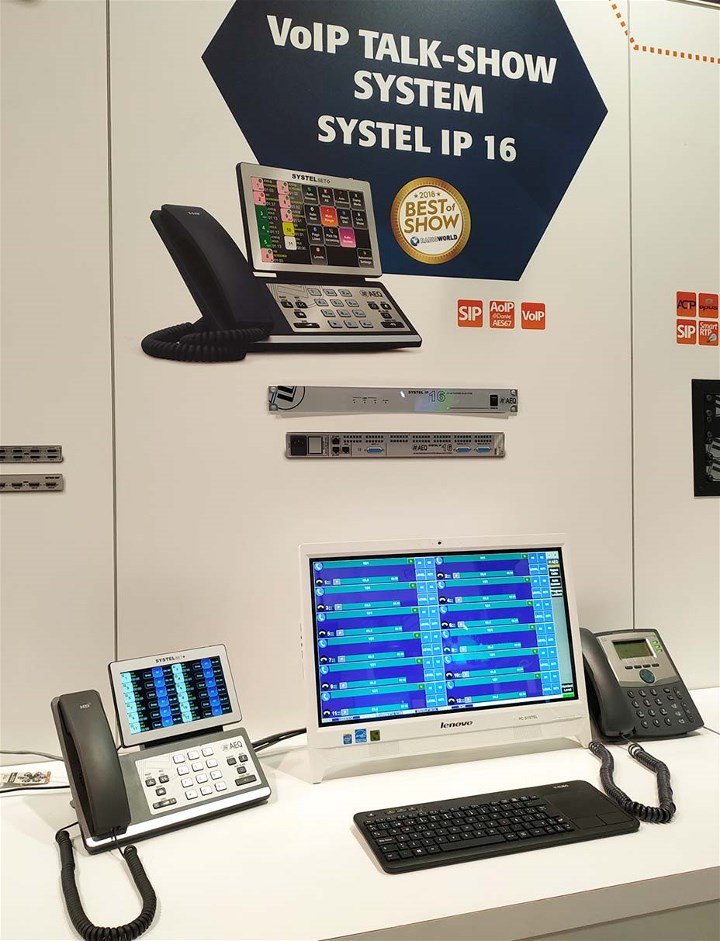 It has the capacity for 16 simultaneous SIP phone lines and 4 additional ones for operator’s IP phones.
Systel IP 16 has 4 digital audio inputs and outputs as well as 2 analog audio inputs and outputs. As an exclusive feature, it also offers ample local IP audio routing capabilities: 32 AoIP inputs and outputs using Dante protocol (compatible with AES 67), so it can be integrated into an AoIP system and use its audio in a flexible way from different devices in an IP network.

In short, it is based on an audio mixing and distribution matrix with 58 inputs that can be sent mixed and routed in any way desired to each of its 58 outputs. This effectively means that each caller or studio can receive any mix of external lines and local audio that is required for the talk-show.
SYSTEL IP 16 can be controlled through the standard "Systel IP Client" application, SystelSet+, as well as Systel IP TV

The product was awarded the "Best of Show 2018" at the previous NAB Show edition and is shipping now.

ISB (International Sports Broadcasting) relies on AEQ technology for the production of the 2022 World Games.

AEQ supplies a complete radio kit for the local radio station of Merindad de Campoo.
back to top