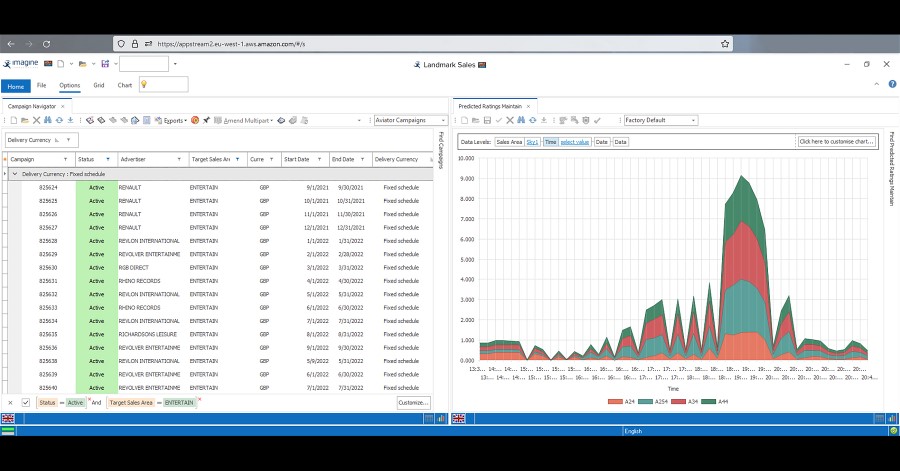 Shift to managed services in the cloud delivers on operating efficiency, security and business continuity.

Thames Ditton, England, September 8, 2022 – Virgin Media Television Ireland, a long-standing user of ad sales and management products from Imagine Communications, has transitioned its Landmark™ Sales operations to a fully managed service running in the cloud. The move has allowed Virgin Media Television to remove the costs related to hardware refresh cycles and improve revenue protection capabilities, while enabling the company to refocus its resources on its core business without worrying about the underlying infrastructure.

Virgin Media Television is Ireland’s number one commercial television broadcaster, with multiple channels and premium content including the best in sport and entertainment, drama and local news. The company has actively developed innovative campaigns and propositions for its advertisers, built on the Landmark Sales platform from Imagine.

Now it has made the transition from an on-premises operation to a managed services offering provided by Imagine and hosted in the cloud. Moving to the cloud gives Virgin Media Television the agility to pursue its imaginative proposals to best serve its advertisers and provide engaging television for its subscribers. The agility means Virgin Media Television can quickly add functionality and capacity, without the need to source and integrate additional hardware, and the associated refresh cycle costs.

“We were sold on the advantages of the cloud, but what really amazed us was how completely painless — and really fast — the migration was,” said Eoghan McGonagle, head of sales operations and performance at Virgin Media Television. “As well as making our routine operations much easier, the cloud gives us improved disaster recovery capabilities, allowing us to protect our assets and revenue. It also ensures better resilience, quicker restore times, and the peace of mind that guaranteed business continuity gives.

“Our experience is that the move to managed services in the cloud is life-changing in terms of speed and operational workflow improvements.”

Mark Senecal, general manager of managed services at Imagine Communications, added, “We continue to see strong take-up of our managed services offering in ad tech, because it delivers better workflows, easier collaboration and remote working, and greatly improved security and disaster recovery. We are happy to be able to realize these improvements for Virgin Media Television and to continue to support their thriving sales operation — protecting key revenue-generating Landmark Sales applications.”

Imagine Managed Services help customers unlock the potential of applications like Landmark Sales without the need to own and manage their own infrastructure. The offering provides a fully packaged service where Imagine hosts, secures, maintains and supports 24/7 customer applications in Imagine environments, enabling media companies to have full transparency on costs, reduce risks and optimize total cost of ownership.

Imagine Communications will be showcasing its latest advertising and channel management software, alongside other truly transformational plan, make and monetize solutions at IBC2022 on stand 2.B49.