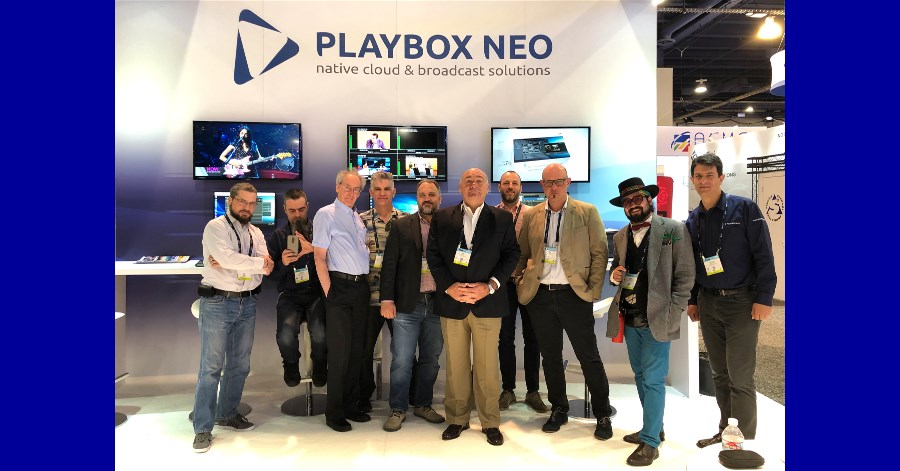 April 17th, 2019 - PlayBox Neo reports the most successful NAB Show in the company's 20 year history, doubling the number of registered visitors to its exhibit booth compared with 2018.

"NAB continues to go from strength to strength for us and is still one of the key events in our trade show calendar along with IBC, Broadcast Asia, Broadcast India and CABSAT," comments PlayBox Neo CEO Pavlin Rahnev. "We are seeing a lot of new business globally from the broadcast, education, government and corporate sectors, all of which were well represented in a US, Canada and Latin American context."

"Our new Cloud2TV offering made its US-market debut at NAB 2019 and looks set to confirm our position as the market leader in TV channel branding and playout. Cloud2TV attracted a lot of interest for its ability to power fast-startup broadcast channels and also for OTT channels. Established channel operators appreciate the flexibility Cloud2TV offers if they ever need to expand quickly beyond the capacity of their server-based infrastructure."

"The main focus of attention continues to be on our Channel-in-a-Box with customers upgrading to the latest version," adds US Director of Operations, Van Duke. "They include traditional broadcasters, telco service providers, playout facilities and universities as well as a broad range of corporate users. We continue to receive very positive feedback about the reliability of our servers and software, our intuitive user interface and the proven excellence of PlayBox Neo technical support."

"One interesting message emerging from NAB this year is the impending transition to 8K content acquisition in readiness for wall-to-wall TV which the display manufacturers are striving to make affordable during the coming decade. Our Channel-in-a-Box product range already supports 4K UHD both for broadcast and standalone corporate applications. We are certainly not pushing for new display standards but, if the industry decides it wants 8K, we will be there!"