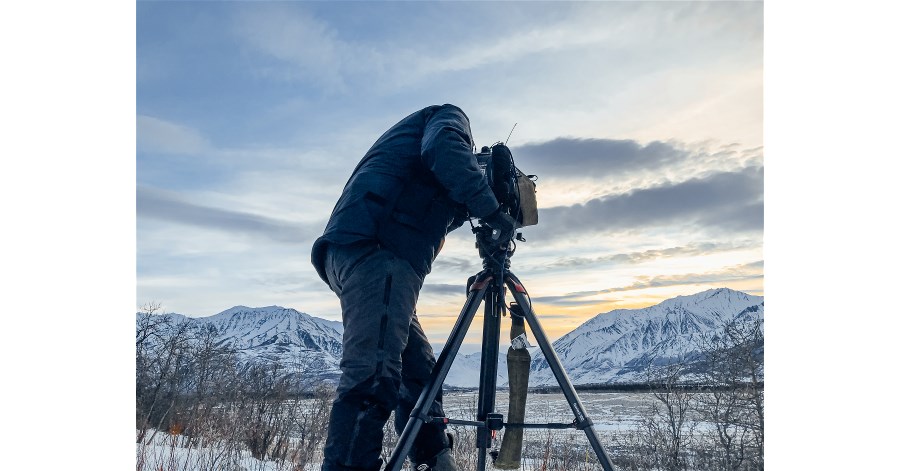 BURY ST EDMUNDS, U.K., and SHELTON, Conn. - Oct. 18, 2019 - Anton/Bauer's Dionic XT batteries and a Sachtler flowtech100 carbon-fibre tripod played starring roles in the production of Series 1 of "The Americas With Simon Reeve," currently airing on BBC Two. As director of photography for the program, renowned cameraman Jonathan Young relied on the Dionic XTs and flowtech100 to capture stunning imagery in rugged, remote, and challenging locations, from the icy wilderness of Alaska's Denali National Park to the steaming jungles of Costa Rica.

"The Americas" is the latest in Young's long-term collaboration with Reeve, a well-known British author, adventurer, and TV presenter. The two-series program traces Reeve's journey "from the top to the toe" of the Americas, with Series 1 covering North and Central America. Currently in production, Series 2 will continue the story down through South America and will air in 2020.

"This program is Simon's most ambitious journey yet, and he explores parts of the Americas few outsiders or even locals get to see. On this shoot, we had every extreme of temperature and location that it's possible to encounter in a single filming assignment," said Young. "We pushed our equipment to the limit, and naturally, we expected something to break or fall apart. But the Dionic XT batteries and flowtech100 tripod performed flawlessly throughout, whether we were shooting in -20 degrees Celsius in Alaska or 35 degrees and high humidity in Costa Rica. Once again, the Anton/Bauer and Sachtler gear surpassed my expectations."

Young shot most of "The Americas With Simon Reeve" Series 1 using several different Sony cameras such as the PXW X500 and the FS5, all utilising Canon lenses. With its lightweight yet sturdy carbon-fibre construction, the flowtech100 tripod combined with a Sachtler Video 18 S2 fluid head to provide stable support and smooth operation for the camera payload, which often exceeded 15 kg.

For the Alaska portion of the shoot, the crew travelled to the head of the Ruth Glacier in Denali National Park in a small plane. The plane's weight restrictions and limited space meant Young could only carry one tripod on the trip, but the flowtech100 covered all of his needs — accommodating cameras ranging from a small Sony A7S DLSR (used for shooting the aurora borealis) on up to the larger and heavier cine cameras.

"This was my first shoot with the flowtech tripod, and it absolutely blew me away," Young commented. "Initially, I had doubts about its performance at low temperatures because I've seen other carbon-fibre equipment become brittle or crack in extreme cold. That did not happen with flowtech – it held up beautifully with no stiffening or brittleness."

Young was also impressed with flowtech100's fast and easy setup, ruggedness, and lightweight, all of which were critical not only on the glacier but also on shoots in Mexico, Guatemala, Belize, and Costa Rica. One location, the ancient Maya site of Yaxchilán in Mexico's Chiapas state, required the crew to travel up the Usumacinta River, hike through the ruin complex, and then climb 400 feet up rough stone steps to the top of the largest temple 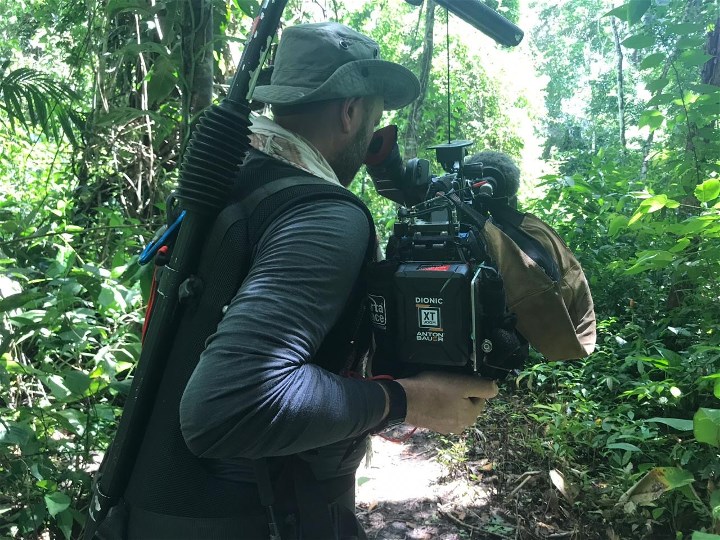 "Not only is the flowtech light enough to be carried easily over long distances, but it's extremely fast and easy to set up on uneven ground. With just three speed brakes to lock, I could even deploy it with one hand, and each leg could adjust automatically to a different height, such as multiple steps on the temple," Young says. "Time really is of the essence in many cases, such as wildlife shots. In the Costa Rican and Belizean jungles, for instance, when we were using a long lens to shoot macaws or toucans, we had to be ready to set up the instant we saw the birds circling. The flowtech100 made it possible."

Young used the same Dionic XT batteries for "The Americas" that he had employed for his previous Reeve project, "The Mediterranean With Simon Reeve," which aired on BBC Two in 2018. The batteries reliably powered not only the cameras but also a SmallHD 702 monitor and, in some instances, a Teradek wireless transmitter as well.
"I am incredibly impressed with the Dionic XTs. After over a year of hard use and regular charging, you'd expect batteries to start showing their age. But I have not noticed a drop-off of performance with the Dionics," Young said. "These batteries are seriously rugged – they've flown around the world and they've been hand-carried in a Peli case, snapped on and off cameras countless times, carried in coat pockets – and there's barely a mark on them."

Just as with the plane flight in Alaska, weight was a serious factor on the Yaxchilán shoot. The Dionic XTs' long run time meant the crew was able to carry fewer batteries on the rugged approach to the site. The batteries' ability to operate effectively in extreme heat, not only in Mexico but also in Costa Rica, was another critical factor.
"With the Dionics, we were able to calculate our battery requirements down to the minute to ensure we could climb to the top of the temple, filming as we went, with a safety margin to get back down again. And all we needed was one Dionic XT mounted on the camera, plus a spare, to get us through at least four hours of hard, nonstop shooting. It made a big difference on a hot day with a big, strenuous hike," Young said.

He added, "Anton/Bauer has put so much thought and effort into the use of the Dionic XTs in extreme environments. I've now used them on both ends of the temperature spectrum, and they've never overheated or let me down in any way. Heat can be a battery's worst enemy, but in the Costa Rican jungle, where we were dealing with both heat and humidity, there was no fluctuation at all in the Dionic XT's performance."

The combination of the Dionic XT batteries and flowtech100 tripod enabled Young to capture stunning and unforgettable moments for "The Americas With Simon Reeve" — fleeting images that change rapidly and then disappear. In one example, Young captured the late afternoon movement of the sun across Denali, the highest peak in North America, a signature shot that was used to open the series.

"The image of Denali was a one-shot deal, and we would have missed it completely if we'd had to spend a lot of time setting up a tripod or stop and go back to the plane to get another battery," Young said. "That's why the flowtech100 and Dionic XTs were so critical on this program. I know I can always count on these solutions when it really matters."

Sachtler: Level up with aktiv™.