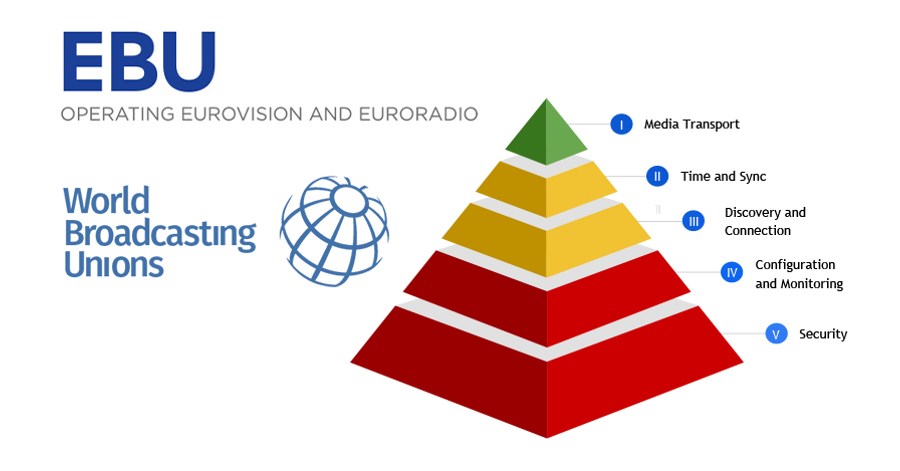 The EBU Technology Pyramid for Media Nodes has been endorsed by the World Broadcasting Unions (WBU) over the summer, further positioning it as the key point of reference for an industry keen to mature the ecosystem of SMPTE ST-2110-based IP production technology.

Developed by broadcasters under the EBU banner, the Technology Pyramid for Media Nodes is a gap analysis for supporting protocols in ST-2110-based IP production environments. ST-2110 users already benefit from the interoperability of equipment made by a large range of manufacturers. The Pyramid calls for further protocols and functionality, such as discovery, that will greatly facilitate the deployment and management of production infrastructures. It is based on the minimum user requirements captured in Tech 3371. The EBU encourages users and implementers to use the maturity checklist to assess how far a particular piece of equipment goes in meeting those requirements.

BBC and CBC/Radio-Canada – both of whom are adopters of ST-2110 that have gathered extensive experience with IP production facility deployments – have welcomed the WBU endorsement of the Pyramid.

CBC/Radio-Canada Executive Director of Engineering Solutions François Vaillant said: "It’s great to see and extremely valuable for every user of this technology that we have reached an international consensus on the user requirements for IP-Based equipment. We are looking forward to the industry’s response at IBC 2019!"

Like every pyramid ever built by humans, the Technology Pyramid represents a challenge in terms of vision, coordination, and execution. R 152, the EBU Recommendation underlying the Pyramid, articulates a consensus between a wide range of industry participants, both public and commercial, on the building blocks that should be laid next.

Mark Patrick, the BBC’s Lead Architect on the Cardiff facility project, added: “As early implementers we know of the needs articulated in the EBU’s position document R 152 first-hand. These endorsements add even more weight to those calls. Everyone will benefit."

Webinar: 5G for the distribution of media content.
back to top