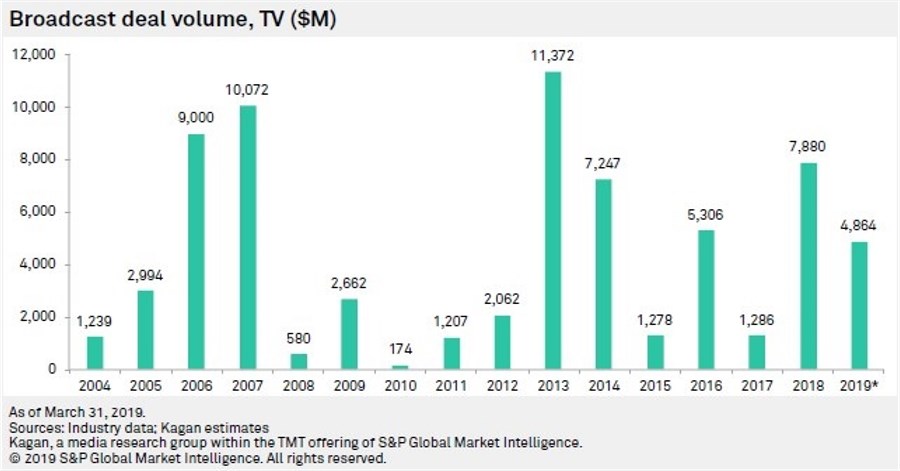 Monterey, CA, May 6, 2019 - U.S. broadcast station mergers and acquisitions volume reached $5.1 billion in the first quarter of 2019 as tracked by Kagan, a media research group within S&P Global Market Intelligence. This is the largest quarterly deal volume since second quarter 2007.

Nexstar announced it had reached two agreements, one with E.W. Scripps Co. and one with TEGNA Inc., to sell 19 stations in 15 markets for a total of $1.32 billion. The divestitures were necessary for the FCC’s approval of Nexstar’s merger with Tribune Media Co., announced in December 2018.

In a $45 million deal in February, Gray Television Inc. extended its market into two new markets and two new states, buying two CBS affiliates, WWNY-TV in the New York market and KEYC-TV in the Minnesota market from United Communications Corp. 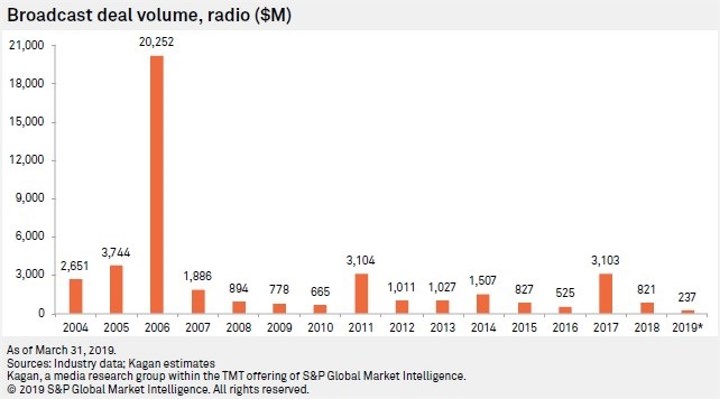 The radio deal market only contributed $236.8 million deal volume, and more than half of it is in one way or another connected to Cumulus Media Inc. In the top radio deal of the year, Cumulus sold six radio stations to Educational Media Foundation Inc. (EMF) for $103 million. This is the highest price to date that EMF has appeared to pay for a group of stations.

Cumulus also swapped one station in the New York market and two stations in the Massachusetts market for three Entercom Communications Corp. stations in Indianapolis. At an average 6.7x multiple, Kagan estimates each side of the swap being worth $9.50 million.

Competitions Ramp Up on U.S. Traditional Multichannel Market over Content Availability.
back to top