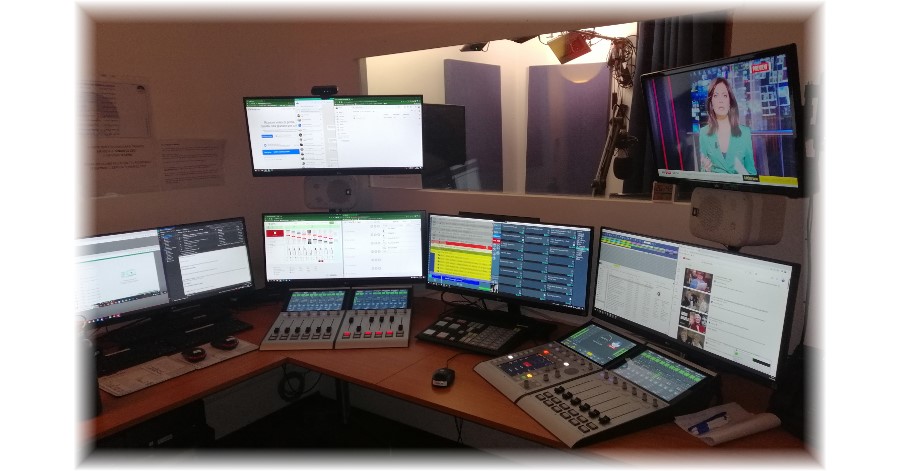 Developed for use in on-air radio and television studios, MCRs and OB vehicles, DHD's RX2 scales easily from 6 or 12 faders up to 96 faders.

Milan-based broadcaster Giornale Radio has chosen a latest-generation DHD RX2 audio mixing console for installation into a new production control room, plus a TX2 compact touchscreen mixer for use in the adjacent live transmission studio. The project was supervised by broadcast systems integrator BVmedia.

"Giornale Radio required a console that a single studio operator could use easily and flexibly for visual radio production," comments Roberto Zeccara, Senior Project Manager at BVmedia. "The solution we recommended, installed and commissioned, integrates efficiently and effectively into the GR workflow. It centres on an 18-channel RX2 with dual Dante audio-over-IP in/outs plus an audio routing switcher to connect with five FM radio transmission areas. GR confirmed the choice of RX2, chosen for its unsurpassed sound quality, excellent cost-efficiency and highly flexible logic customisation. We initially hosted the system at our Milan premises while a new site was being created at Giornale Radio headquarters just a few kilometres away. The RX2 is interfaced to a third-party edit/production studio and visual radio automation, allowing seamless control of the creative process."

"Giornale Radio has an impressive portfolio of broadcast innovation across many production styles and delivery media," adds Christoph Gottert, DHD's International Sales Manager. "Internet-connected audiences are ideally placed to experience fast-access news and appreciate the ongoing advances in streaming services such as visual radio. Roberto Bellotti, CEO of BVMedia, and his staff continue to demonstrate their proven experience at every point in the broadcast production and transmission chain."

Developed for use in on-air radio and television studios, master control rooms and OB vehicles, the DHD RX2 is based on two modules – central and fader – which can be combined and configured to match a wide range of radio and TV production environments such as on-air studios, main control rooms and OB vehicles. Configuration scales easily from small production units with 6 or 12 faders to large consoles with up to 96 faders. Each module has a dedicated high brightness 10.1 inch touch display. Supported character sets include West European, Arabic, Burmese, Chinese, Cyrillic, Hebrew, Japanese, Khmer, Korean, Tamil and Thai.

The RX2 central module (52-5810) provides the main audio I/Os plus a direct microphone input and a stereo headphone output. Loudspeakers can also be driven directly from this module. The 10.1 inch touch display provides access to main control and channel settings, metering and system snapshots. Assignable hardware buttons are provided in the central section, plus adaptive labels in a separate 7 inch vertical touch display. The adaptive labels provide fast and tactile access to functions such as monitoring and talkback. Each RX2 fader module (52-5820) includes six dust-protected 100 mm track-length motorised faders. Every fader channel is augmented by a rotary encoder and two pushbuttons. The rotary encoder can be assigned to control gain settings, auxiliary sends, EQ parameters and dynamics. The pushbuttons are assignable to functions such as on/off, prefade listen, layer or talk.

The DHD TX2 is a multitouch mixing console with an intuitive and fully customisable control interface which can be placed on a desktop or attached to a worksurface via a VESA based connector. It is designed for daily operation where space is at a premium, such as news desks, co-host panels, edit suites and SNG vehicles, and can be used standalone or as an easy way to extend any DHD system. The TX2 provides access to a lot of features within a very small footprint, just 25.8 cm wide by 27 cm front-to-back. Its forward-sloping table-top panel includes a 10.1-inch capacitive multitouch IPS display, two assignable potentiometers and six silent multicolour hardware buttons, allowing professional audio mixing.