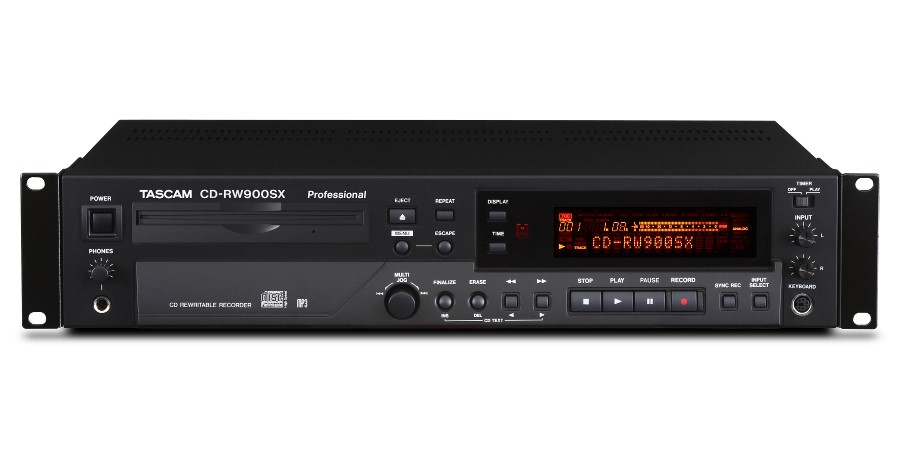 Tascam is pleased to announce the debut of the CD-RW900SX, the latest model in the company’s long line of robust CD recorders/players for professional use. Featuring a new high-quality slot-loading CD drive, the CD-RW900SX offers a rich feature set that makes this unit ideal for a wide range of applications, including studio use, broadcast applications and commercial playback in restaurants, clubs and similar venues.

For those involved in recording studio or broadcast environments, independent trim controls will be most appreciated. In addition to offering analogue input gain controls for the left and right channel, the CD-RW900SX also provides trim control for the digital input – enabling one to easily set the optimal recording levels from a digital source.

The new CD recorder from Tascam also has a variety of track division functions designed to make recording easier. This includes an automatic mode which sets a track marker based on the input level, effectively starting a new track when the input falls below a specified level. Further, a record-mute function can insert silence between tracks. The unit also allows time-based track creation every 1–10 minutes – ideal for conference recording or similar cases when there is no gap between segments such as when recording live music. Finally, users can create a new track manually by pressing the record key during recording.

The comprehensive set of playback features includes auto-cue, auto-ready, pitch control, key control, repeat playback and power-on playback capabilities. Power-on playback is particularly useful for environments such as theatres and clubs, for example, where the unit can automatically start playback the moment the power comes on. Recording features include fade-in/fade-out and sync recording which allows a recording to start/stop automatically at a preset level.

The CD/CD-RW drive in the new CD-RW900SX provides a stable platter that is designed to minimise errors while writing to the disc. An anti-shock buffer stores audio data in memory to ensure smooth playback, even if shock or vibration lasts for up to four seconds.

The recorder includes a wireless 10-key remote control and can also be operated using a computer keyboard (sold separately).

TASCAM Announces the Version 1.20 Firmware Update for the Mixcast 4 Podcast Station.
back to top