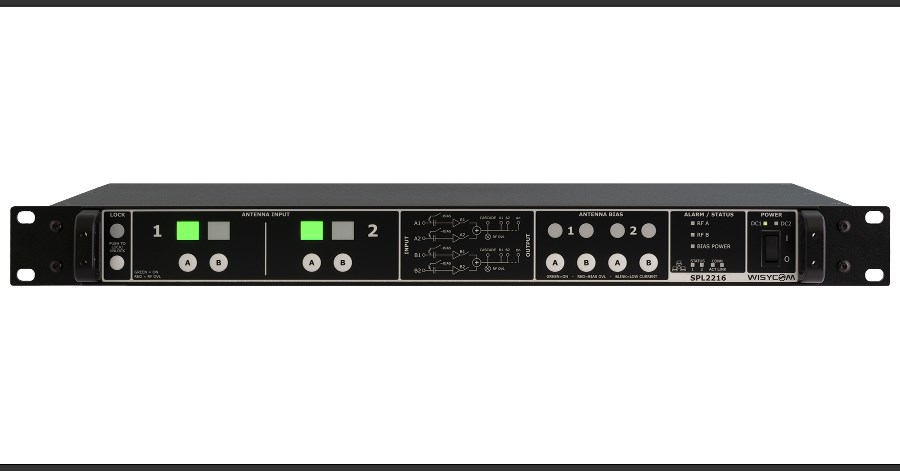 With multiple receivers fed via diversity antennas or through Wisycom’s MAT288 Antenna Matrix, the new 2200 Series’ multi-couplers add gain and input for either two coverage zones or multiple MAT288s. This is the industry’s first-ever multi-coupler with multiple inputs and double the outputs, up to 16 receivers or 32 channels from one 2216, as well as remote control of Wisycom’s BFA and LFA antenna products through coax cable.

“As with all Wisycom products, the SPL2216/2208 features a wide frequency range (170-1240MHz) and a high level of robustness and linearity, for use in high-density frequency arrangements,” says Massimo Polo, sales & marketing director, Wisycom. “The device additionally serves as a resource for diagnostics information from antennas via a coax connection to the Wisycom Remote Antenna Protocol. This feature allows the user to monitor and control boosters and antennas within the network in real-time via an IP network using Wisycom Manager 2.0, the latest version of our proprietary wireless remote-control interface.”

Using the new combiner/splitter, broadcasters can combine or select signals from up to two (2x2 diversity) antenna inputs to feed 16x2 (SPL2216) or 8x2 (SPL2208) diversity outputs. By connecting two units, the system can be set up in a cascading arrangement that covers up to four zones to feed as many as 32 receivers. The SPL2216/2208 can be controlled with the simple push of a button, or through Wisycom Manager, allowing for a quick and easy matrix selection between two diversity inputs. It also offers a redundant DC supply, which ensures the system will encounter no loss of power.