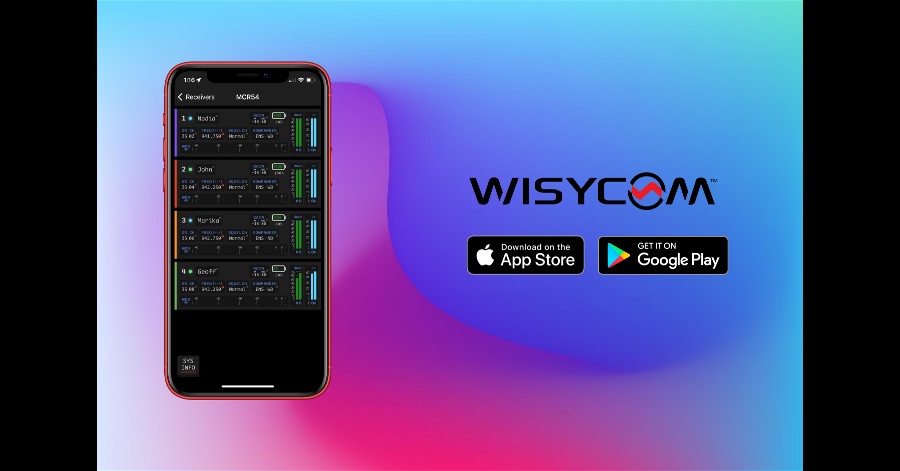 Tombolo, Italy, July 19, 2022 - Wisycom Srl announces the availability of its new Wisycom App for the Symphony Series wireless microphone system, available for iOS and Android. Accompanying the release of the app are firmware enhancements to the line, which includes the MCR54 four-channel and MCR54-Dual two-channel true-diversity portable receivers, and the MTP60 bodypack transmitter.

“We’re excited to release the app for our Symphony Series users,” said Massimo Polo, Vice President of Sales at Wisycom Srl. “This app brings every critical function of our Symphony devices right into the hands of system operators, improving on the most advanced wireless system available.”

In conjunction with the ground-breaking app, new device firmware is also now available for all Symphony Series products, allowing users to take full advantage of the app’s features. This firmware also adds enhanced functionality and performance to what is arguably the most advanced wireless system on the market. A new version of Wisycom Manager PC software has also been released to match these firmware enhancements.

The Wisycom App is now available on the Apple App and Google Play stores. The Symphony Series, including the new app, will be on display at the upcoming IBC Show (Stand 8.D78). All firmware updates for the Wisycom Symphony Series and the latest version of Wisycom Manager can be downloaded from the Wisycom website at
www.wisycom.com .