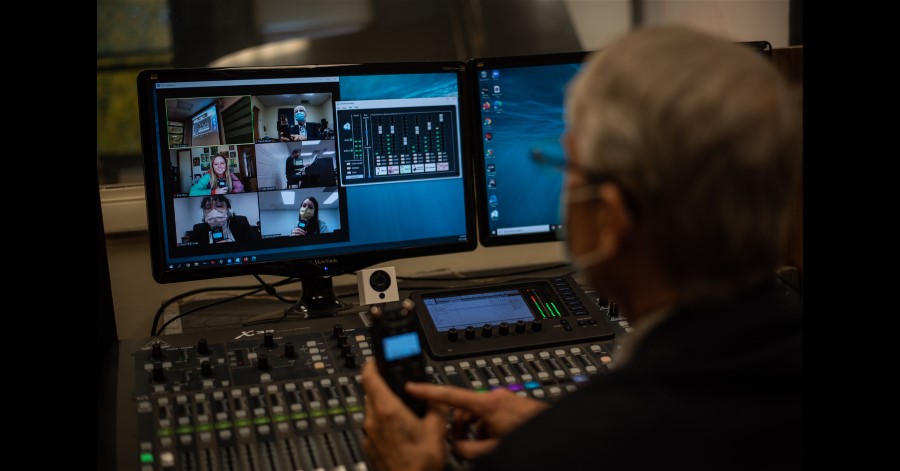 Chicago, IL - October 2020 - As the defining global health issue of our time, the pandemic has literally changed the lives of people everywhere—impacting business, education, and virtually all aspects of life. Even with no pandemic, remote music rehearsal has always been a challenge. With that said, Chicago’s Moody Bible Institute has found an innovative solution—thanks the to the DR-05X Stereo Handheld Digital Audio Recorder and USB Audio Interface from TASCAM.

Moody Bible Institute is a Christian institution of higher education with its main campus in Chicago, Illinois. It was founded by evangelist and businessman Dwight Lyman Moody in 1886. Dr. David Gauger, D.M.A., is an Artist/Professor of Music at Moody Bible Institute. Currently in his 27th year, he teaches classes in several areas, including Music Technology, Contemporary Worship, and instrumental music. He also directs two 12-student Worship Teams that, because of the pandemic, are currently rehearsing in real time online. As part of his unique solution to conduct rehearsals remotely, he purchased 30 DR-05X recorders and has plans to broaden that number substantially. He discussed how the TASCAM recorders are an integral part of the remote, real time rehearsal solution.

“Our plan is to have all of our live rehearsal groups use DR-05X recorders as a front end for the Jamulus low latency software,” Gauger explained. “The first stage includes both Worship Collectives, the One O’Clock Jazz Band, and the Current Practices in Worship Leading class. For these programs, we purchased 30 recorders in August 2020. The Collectives each rehearse twice a week for 90 minutes, the Jazz Band rehearses once a week for an hour, and the Worship Leading course has had several online rehearsals.”

To accomplish this, each student has their own DR-05X recorder and even rhythm section players have their own in case they must quarantine for any reason. As a result, the ensembles can, theoretically, continue rehearsing—even if classes go completely online.

To gain an understanding of the rehearsal process, Gauger described the situation with his vocal ensembles, “The solution to safe, ‘social distancing’ in a rehearsal environment caused us to seek another solution, which was to put every singer in their own room. College dorms function well for this, as each room provides isolation and does not raise the risk of infection assuming that precautions are adhered to, such as opening the window for ventilation.”

“Allowing the singers to hear each other and be heard can be accomplished using the Internet,” Gauger continued, “but typical video conferencing software works very poorly for this due to long and somewhat random latency differences between singers. Singing together requires much tighter tolerances than typical video conferencing solutions provide. In the last few years, several developers having been writing low latency software to solve this problem. SoundJack, JamKazam, and Jamulus are three such examples of this. We chose Jamulus because of its data requirements, the ability to set up and run your own server to keep your data ‘in-house’, and the fact that it’s open source software.”

According to Gauger, the signal chain is as follows: DR-05X  USB input on the computer running Jamulus  Ethernet connection to the Jamulus server on campus. Students hold the DR-05X like a handheld stage mic and are instructed to sing over the top of the unit as opposed to directly into it. One should also note that Wi-Fi is too slow for this purpose. Hence, Ethernet is the method of choice.

Gauger described a typical rehearsal, “In worship teams, there are singers plus a rhythm section (piano, bass, drums, guitars, synth). While the six singers are in their dorms singing, the rhythm section is assembled in a recording studio that has mics, a mixing board, and a headphone monitoring system. They are all socially distanced and are wearing masks. There is a screen with a projector showing the Zoom meeting with all the singers in their dorm rooms. There is a camera in the studio feeding the Zoom session. This enables the singers to see and hear the studio musicians while the studio musicians can see and hear the dorm-based singers. At the same time Jamulus is handling the audio, we run a simultaneous Zoom video conference, enabling everyone to see each other—but the Zoom audio is muted, and the only sound heard is from Jamulus.”

Queried about those DR-05X attributes that are most appealing for their environment, Gauger offered the following thoughts, “The DR-05X’s ability to serve as a stereo microphone, low latency USB audio interface, and standalone recorder is huge. I also found the DR-05X’s sound to be impressive and its omni mics mean it is much less susceptible to the proximity effect typical of cardioid mics. The fact that the DR-05X not only functions as a mic, but also as a recorder and interface to other audio software is huge. The unit is truly multifaceted.”

Before shifting his attention back to the business of the day, Gauger summarized his experience with the TASCAM DR-05X, “While researching how to implement a real-time synchronous rehearsal system, we looked at many different hardware solutions to the mic/USB interface piece. In the end, it came down to four things: low latency of the drivers, the stand-alone recording capabilities of the device, the TASCAM sound and brand, and it had to be affordable by college students. The TASCAM DR-05X ticked all the boxes and we’re now running no less than 9 to 10 hours of online rehearsals per week. The rehearsal rooms may be empty, but there’s a lot of music being made online in real time because of this system—of which the DR-05X is a major part.”

To learn more about the Moody Bible Institute, visit www.moody.edu/ .

Tascam Introduces the Mixcast 4 Podcast Station.
back to top