Stratford, CT - April 3, 2019 - CueScript, the leading developer of professional prompting solutions, presented the global debut of CueiT prompting software for iOS at NAB 2019, together with its wireless scroll control solutions.

CueiT prompting software for Windows was originally designed and built on feedback from broadcasters, offering greater flexibility, ease of use, and a shareware style allowing CueiT to be loaded onto every PC in the facility. Due to customer demand, CueScript has now developed a complete Mac version of the software, further widening the accessibility of the system to Mac-based organizations. A major global social media platform with studios around the world has already adopted CueScript with CueiT for Mac for its growing content creation operation.

CueiT is a key part of the world’s first complete IP-based prompting solution, together with the ‘CueB’, the engine that also offers connection via Ethernet or USB and the connectivity of near limitless scroll controllers that can also be connected over IP. The CueB produces a true HD-SDI prompting signal, as well as a composite video signal. Multiple CueB’s can run independently or simultaneously, and can be rack mounted in the C.A.R or anywhere in a studio complex. CueScript provides true HD-SDI video outputs on the CueB and inputs/outputs on its CSM Monitor range as standard. 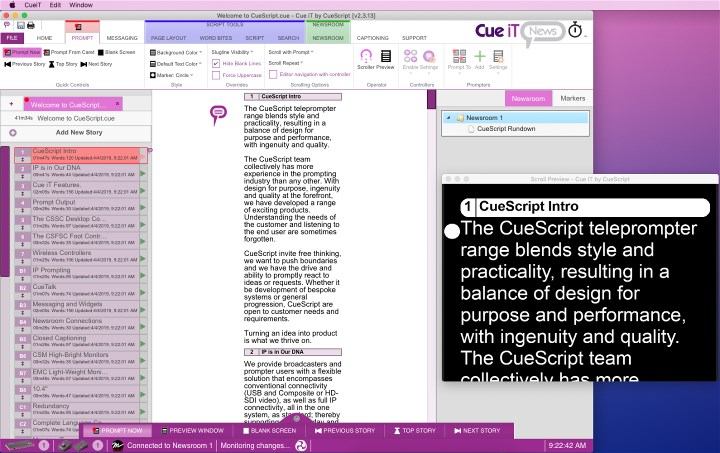 Visitors to Stand C2622 also saw CueScript’s range of innovative wireless scroll controls that offer a choice of connectivity, including IP. Users are able to choose to connect their desk, hand and foot controllers either by USB locally to the computer, by Ethernet within the network infrastructure, or by CAN bus using standard coaxial cable, resulting in complete plug-and-play connectivity and flexibility across the product range. All of the controllers are true RF devices, which are far more dependable than Bluetooth or wifi in a broadcast environment, and have a much longer battery life which makes them more efficient, cost-effective and environmentally friendly.