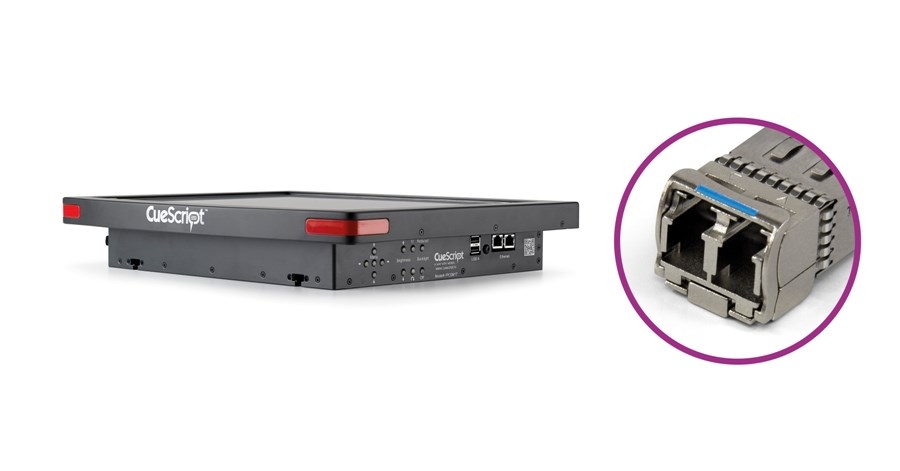 Broadcasters and system integrators looking at all-SMPTE IP installations no longer have to rely on SDI-SMPTE gateway converters, thus allowing the CSMV2 a seamless interconnection with 10GigaBit fibre IP switches. This allows both the prompt and talent monitor to be fed from a single 10GB fibre cable, even when the talent monitor is an existing SDI-only display. CSMV2 ‘decapsulates’ the 2110 on-air/talent feed sent as a second IP stream on the cable, and outputs it as a traditional SDI video signal.

While SMPTE IP video will inevitably become a standard over the next few years, CSMV2 has not sacrificed any existing connectivity; it continues to support HD-SDI, HDMI and composite video. For customers that want IP flexibility but do not have a 10GB IP-based video switch, the CSMV2 also includes CueScript’s innovative IP connectivity now referred to as CueTALK, which provides seamless operation through standard CAT5/6 IT infrastructure.

In addition to its unique 2110 capabilities, the CSMV2 has been completely redesigned internally from the original CSM range that was launched in 2014. The new model features additional prompting functionality, reduced weight, increased reliability and longer product service life. It uses around 35% less power than the previous model – around 28 watts - while maintaining high brightness and full processing power. The 17” and 19” monitors also enjoy new higher resolution standards up to 1920x1080 Progressive 60/59.94 frame rates (SD/HD/3G SDI).

A new integrated single menu controls all the features of the monitor including picture settings and the teleprompt-specific features. IP-based remote control and remote configuration come as standard and provides the ability to set every feature of the monitor remotely. CueScript is committed to introducing new monitor communication and control in each new release of CueiT desktop software.

“Designed from the top down, CueScript has listened to the demands of the industry and delivered the sleeker, lighter and greener CSMV2 on a completely software defined platform,” said Michael Accardi, President, CueScript. “This will enable CueScript to deliver feature set enhancements quickly and easily as customer demands change.”

CueScript presented global debut of CueiT software for Mac at NAB 2019.
back to top