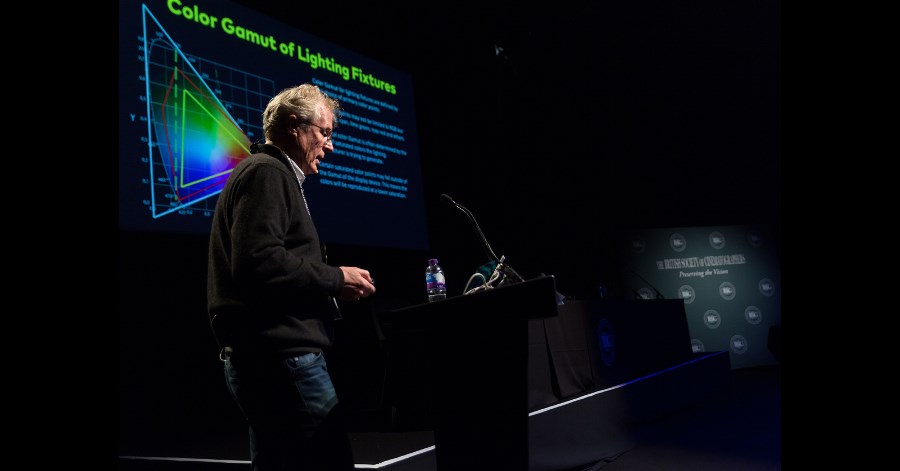 London, 10 March 2019 - More than 100 directors of photography and students of cinematography, gaffers and production lighting technicians were on hand to hear Kino Flo president and founder, Frieder Hochheim, tie together the art and technology of LED colorimetry for HD image capture.

“The color science of LED lighting is to cinematographers what natural pigments were to the old world art masters like Rembrandt and Vermeer,” according to Hochheim. “With new features like camera look-up tables and advanced gama controls, cinematographers can mix their own LED ‘dye, color and shading’ to control the look of the final image.”

Understanding Color Gamut
Hochheim guided the audience members on tour through some of our industry’s ongoing challenges to the making artificial light sources render color naturally on HD cinema cameras.
Points of interest along the way included a discussion about the tools for measuring spectral indexes and how they relate to the reproduction of true white light for modern motion picture and television production. This section dove into a comparative report on the Color Rendering Index (CRI), the Television Lighting Consistency Index (TLCI), IES TM-30-15, and the Spectral Similarity Index (SSI).
Kino Flo’s development of a high-end bias spectrometer for measuring the response of lighting sources and camera light sensors has long been the company’s basis for a tight design and manufacturing control over the quality of white light, he said.  To explain how HD camera technologies “see” white light and the color gamut, Hochheim walked the audience though critical challenges such as “balancing” on the high wire that is the Plankian Locus, and a section covering Response Curves—phototopic curves and HD camera spectral distributions.

Camera Lookup Tables for LEDs
Like other innovations over the years, Kino Flo’s new LUT’s and gamut control features represent another step in pioneering a new generation of broad spectrum LED softlights and pushing the color space to new artistic levels, according to John Daly, BSC, who attended the seminar.
“It was a great presentation by Frieder…on colour science, and how the Kino Flo range of LED fixtures can be fine-tuned with camera LUT’s,” Daly said. “The colour can be dialed in to match the sensors of all major digital cinema cameras, thus ensuring natural looking skin tones.”
The Kino Flo True Match® firmware 4.0 comes loaded with camera look-up tables for the following four cinema cameras:
♦ Arri Alexa♦ Panavision DXL♦ Sony Venice♦ Panasonic Varicam
“More camera manufacture’s will be added to the LUT’s in upcoming firmware releases,” Hochheim said.

Colour Science History
Since developing a color science department for its True Match® tubes in the 1980’s, Kino Flo has been at the forefront of LED design and manufacturing, creating a color correct, color stable line of tungsten and daylight LED emitters, according Hochheim. The company has maintained color quality for more than three decades of fluorescent and LED design, across all product models.
From film to digital cinema cameras, to other color critical industries such as smart phone calibration and art restoration studios, Kino Flo is recognized for unrivaled color management.
Gaffers and set lighting technicians enjoy a growing collection of premium softlight “brushes”, like the new FreeStyle LED Tubes, to paint spaces and faces with white light, color and effects.
Kino Flo has been expanding its wireless DMX production lighting, moving beyond its legacy fixtures with new FreeStyle LED portable systems, adding new designs for the Celeb LED’s, debuting a value line of Image LED studio fixtures, and expanding options for video lighting with new Diva-Lite LED’s.

Kino Flo has been invited to present the colour science seminars at a number of industry events through June.