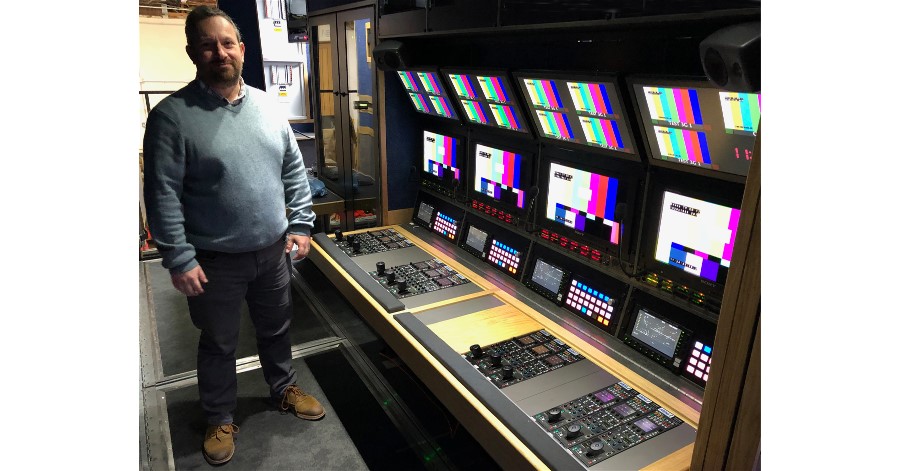 Arena Television, one of Europe's largest independent providers of outside broadcast facilities, has purchased four Leader LV5350 waveform monitors for its new OB17 vehicle which operates from Arena's Redhill Aerodrome headquarters in Surrey. One of Europe's largest and most capable HD trucks, OB17 is a 16.5 metre long 32 tonne articulated vehicle with twin full-length expanding sides.

Primarily operating in HD-SDI SDR and HDR, with Quad HD as an option, OB17 incorporates an IP layer in key areas to add extra flexibility. Onboard features include a 240 square foot production gallery, 16 camera channels, an 80 input Sony vision mixer, a Grass Valley hybrid router with 365 video inputs and 798 video outputs, a monitor wall with up to 180 configurable video preview windows, and a Calrec Artemis Beam audio console.

"OB17 is a powerful HD-HDR/SDR truck built for assignments such as light entertainment," says Dafydd (Daf) Rees, Deputy Director of Operations at Arena Television. "Its first job was for ITV's coverage of the Royal Variety Performance last November. HD-SDR is still the dominant production format but we are seeing a steady increase in demand for HD-HDR."

"We chose Leader LV5350 waveform monitors for the shading suite because the support both standards. Their half rack width 3U form factor was also important to us. Having the Leader display directly below the main shading monitor it is an ergonomically efficient way of shading rather than having to look away to a rasterized display on a separate screen. Our production crews find the LV5350 very to use as it provides all the information they need clearly and quickly which is vital when racking a live event. OB17 is also equipped with a PHABRIX Qx rasterizer which is used to analyze outgoing signal flow. The Leader and PHABRIX products complement each other rather than overlap."

"The OB17 project was managed from conception to delivery by Arena’s in house project team who were tasked with sourcing all the equipment for the truck. The LV5350s were supplied by Paul Froom at Sentinel Broadcast, sourced from Leader's UK distribution partner Thameside TV."