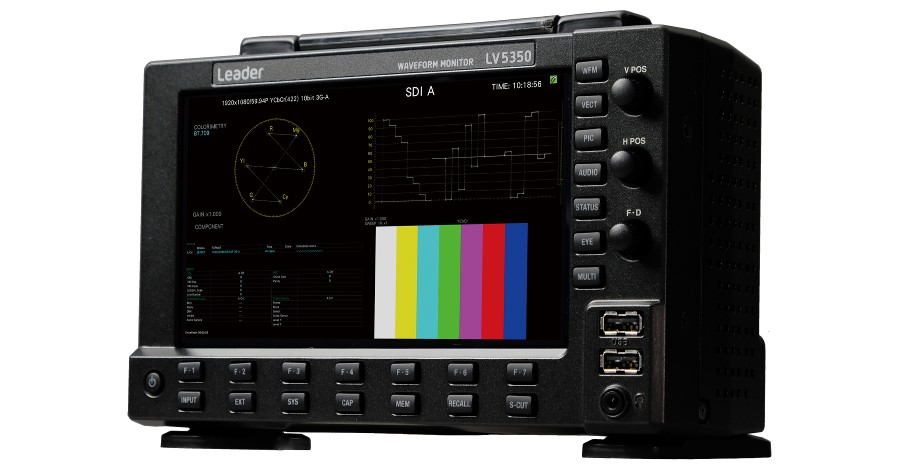 Phoebe Fraser Ltd, a specialist provider of production support services for film television and radio, has invested in a Leader LV5350 waveform monitor. The instrument will be used at the company's London headquarters and on location. Its first project will be the upcoming film Matilda, based on the novel by Roald Dahl.

"Leader test equipment has proved versatile, logical to operate and reliable over many years," comments Phoebe Fraser. "The new LV5350 provides a complete set of reference tools for TV and digital film programme creation and post-production. Portability is essential for many of the projects we work on so the LV5350's compactness and ability to work under battery or mains power are important. Leader's CINEZONE and CINELITE features are particularly useful, allowing camera settings to be checked between scenes and monitored during the actual shoot. The front panel video monitor gives us the ability to compare specific elements – luma waveform or chroma vectors for example – in freeform multiscreen mode. If something needs special attention, we can select the relevant single-display view for close-up inspection. Almost every feature is accessible quickly and easily from the front panel. We also have the option of adding extra software or hardware modules as or when needed to handle new standards such as ultra high definition, high dynamic range and wide colour gamut."

"One of Britain's leading digital imaging technicians, Phoebe Fraser founded her company after graduating from Ravensbourne College of Design & Communication," adds Chris Margrave-Gregory, Senior Broadcast Sales Specialist at Thameside.tv. She has worked in various production and post capacities on over 30 film and television projects, including DIT roles for The Eternals, No Time to Die, The King's Man, Peter Rabbit, The Dig, Blackbird, State of the Union and Peterloo."

"The LV5350 is designed for use in 4K/HD/SD-SDI environments which do not require IP measurement capabilities," details Leader Europe Managing Director Koichi Fukagawa. "It supports all the SDI facilities of Leader's top-of-the-range LV5600 minus the IP measurement capabilities which are currently a minority requirement. The LV5350 has proved especially popular with DITs and camera crews. A key feature is its ability to display two sources simultaneously, allowing side-by-side comparison of the output from two cameras, for example, during initial alignment."