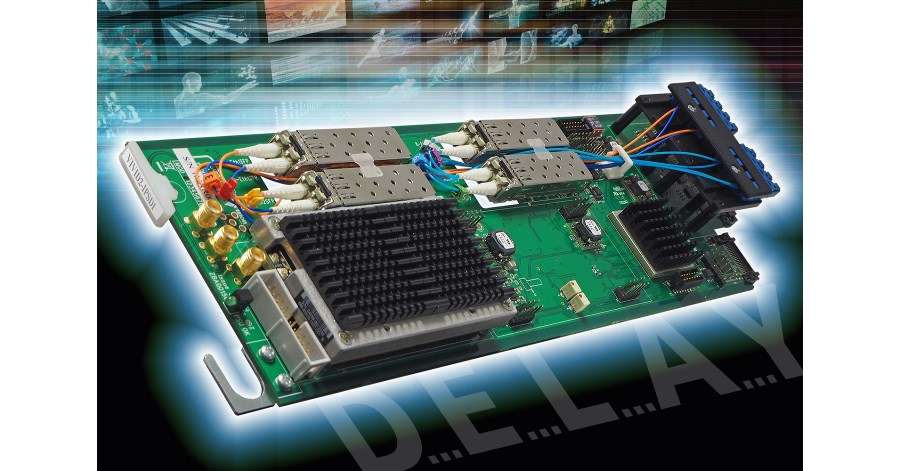 On Stand 2.B59 at IBC 2019 Crystal Vision will be rolling out the latest software apps for its flexible MARBLE-V1 media processor hardware, with MARBLE's mixed SDI and IP I/O making it easy to transition between SDI, ST 2022 and ST 2110. These software apps – which can be replaced as needs change – offer functionality such as video delay, synchronisation, colour correction, IP to IP processing and gateways, with different versions available to help those working in an IP, SDI or mixed SDI/IP environment. The rest of the interface and keying product range – including the Cleanit profanity delays and Safire 3 real-time chroma keyer – will all be available for demonstration at Crystal Vision's new front of Hall 2 location.

A card housed in the Vision frame, the flexible MARBLE-V1 media processor features a powerful CPU/GPU processor, six bi-directional SDI connections, four 10GbE SFP+ network interface ports and eight bi-directional discrete AES stereo channels. MARBLE-V1's functionality comes from the installation of a software app, with apps that are bought with the hardware able to be replaced with different apps as needs change – helping broadcast engineers to make the most of their budgets. The initial apps for MARBLE-V1 were IP gateways and IP to IP translators for making adjustments to IP flows. These are now joined by an additional 16 apps providing powerful solutions for a wide range of IP and SDI video delay and colour correction requirements.

Eight of the software apps being launched at IBC are video delays. These are available with different numbers of channels (single or dual) and delay lengths as well as either SDI, IP or both SDI and IP connectivity and all include a framestore synchroniser allowing engineers to delay and synchronise at the same time. The industry's first video delays to offer IP connectivity, the VIVID1-IP app is a single channel IP video delay while the VIVID2-IP is a dual channel IP video delay. Four apps are available for those working in mixed SDI/IP environments: the VIVID1-IP-SDI (single channel) and VIVID2-SDI-IP (dual channel) combined SDI to IP gateways and video delays, along with the single channel VIVID1-IP-SDI and dual channel VIVID2-IP-SDI which are combined IP to SDI gateways and video delays. Finally the single channel VIVID1-SDI and dual channel VIVID2-SDI introduce an SDI video delay to the Vision frame system for the first time while offering an easy upgrade path to IP and a lower price than the Indigo frame versions. All the video delay apps are suitable for matching any 3Gb/s, HD or SD extended system delays, such as those caused by virtual studio graphics, MPEG encoders and decoders, audio processing, HD radio links and satellite links. The single channel versions provide up to 800 frames of video delay, which is 16 seconds in 3Gb/s and 32 seconds in HD and SD. The dual channel versions provide up to 400 frames of video delay per channel, therefore eight seconds in 3Gb/s and 16 seconds in HD and SD. The apps with IP connectivity work initially with SMPTE ST 2022 with future upgrade to ST 2110 video.

Other products on the Crystal Vision stand will include the new Cleanit video and audio profanity delay system, which allows a live content stream to be delayed by up to 20 seconds (in HD), giving the operator time to react and prevent the broadcast of unwanted or offensive video or audio material. Available either to buy or for short-term hire, Cleanit has already been used for protecting a diverse range of applications, from television broadcasts to the Internet transmission of eGaming events. IBC also gives visitors an opportunity to try out the Safire 3 real-time chroma keyer, with its simple intuitive workflow for setting up a key, support for resolutions from SD to 1080p and features such as lighting compensation, colour correction and video delay to help solve common real world issues.

Based at Whittlesford near Cambridge in the UK and providing a full range of interface and keyers, Crystal Vision helps people transition through a range of technologies – from SD to HD, from HD to IP and from IP to IP.

Crystal Vision now shipping IP Gateways that work with both ST 2022 and ST 2110.

Philip Scofield: "The requirement for IP products is growing quickly and Crystal Vision is unique in offering a powerful modular software based system."
back to top