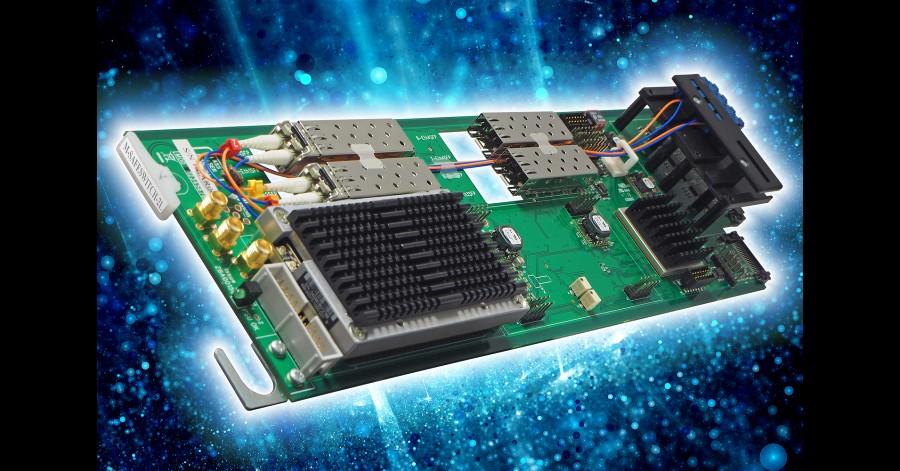 One of the advantages of using Crystal Vision’s MARBLE-V1 media processor is that its software apps can be adapted in response to specific customer requirements. The M-SAFESWITCH-2L IP/SDI fail-safe routing switch and legaliser app was recently created to provide a major UK broadcaster with a unique and elegant solution to a complex SDI studio requirement, saving them both money and rack space while providing an instant upgrade path to IP, including built-in gateways.

As part of a refurbishment project, this broadcaster was looking for 28 synchronisers for its 1080i and SD SDI signals, split between two studios. There were two specific requirements. They wanted a second input for each synchroniser, to be used for a common test signal containing video and individually recognisable left and right audio. The second requirement was to ensure the output was legal and suitable for distribution on national networks that specify the signal to be in the ranges set by EBU R 103. The conventional way to do this would be to have a selection switch before the synchronisers and then a legaliser on each output – an expensive solution that would have used considerable rack space. An alternative solution was to talk to Crystal Vision and explore what could be offered by MARBLE-V1 and its apps.

The Crystal Vision solution was to create a new dual channel app – the M-SAFESWITCH-2L – which combined the safe switching, synchronising and legalising features of the existing M-SAFESWITCH-2 and M-COCO-2 apps. This solution halved the number of products required as each M-SAFESWITCH-2L could process two video signals as well as the test signal. The dual functionality also halved the number of test signal feeds required, as the two independent switches in the M-SAFESWITCH-2L could share an input. Created quickly in March 2021 and delivered to meet the project timescale, the new M-SAFESWITCH-2L app met the customer’s exact requirements. It allowed 14 MARBLE-V1 media processors to provide all the processing for 28 channels of video, giving each channel a synchronised output that fully met EBU R 103 as well as access to the test signal. This installation used SDI signals, but SFPs were supplied so that ST 2022 and ST 2110 video could also be used for familiarisation with working in an IP environment.

The M-SAFESWITCH-2L app is available to buy now, with its features making it useful for a variety of applications. When used as a fail-safe switch, ten fault conditions can be selected to automatically trigger a switch: input missing, input video standard incorrect, active video black, active video frozen, video error, network error, audio group 1 missing, audio group 2 missing, audio group 3 missing and audio group 4 missing. In non-emergency situations it can be used to manually switch to backup when equipment in the chain needs fixing or updating. The M-SAFESWITCH-2L is a clean switch and can correct for any timing difference between the two inputs – resulting in no disruption to the output picture when a switch takes place. As well as a framestore synchroniser on each flow, it can delay the earliest arriving input by up to ten frames – while Source B can also be delayed by an additional 60 frames for when Source A is subjected to a long delay. Further protection comes from the user-defined timing source priority for redundancy, with the option of selecting from the two analogue references on the Vision 3 frame as well as PTP master and backup signals. Should the main syncs become invalid, it will automatically switch to the specified backup syncs. The RGB legaliser on each output will clip any illegal RGB signals to be within the limits as given by the EBU R 103 recommendation, with the clip options including constant hue mode – an advanced new method of legalisation which transforms RGB to hue saturation intensity colour space and reduces saturation without changing hue. The M-SAFESWITCH-2L's support for multiple signal formats gives the easiest possible SDI to IP upgrade, while also making it perfect for mixed SDI and IP installations as well as fully IP or fully SDI environments.

Based at Whittlesford near Cambridge in the UK and providing a full range of interface and keyers, Crystal Vision helps people transition through a range of technologies – from SD to HD and from HD to IP.

Crystal Vision reduces the cost of creating video graphics with M-WEBKEY.
back to top