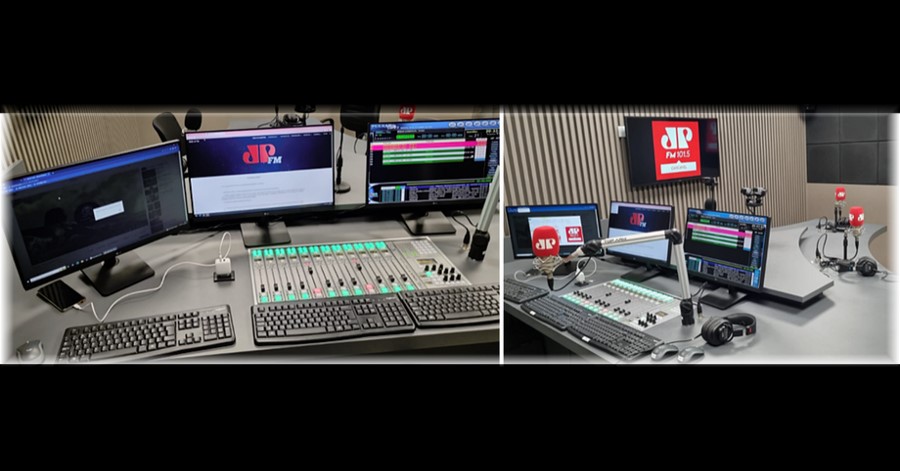 The radio station has decided to trust AEQ again to renovate its studios.

Jovem Pan is a Brazilian radio network of the Jovem Pan Group focused on news, entertainment, music and sports broadcasting. The Jovem Pan network has around 115 stations, which are also divided into other broadcast networks. It has music programming focused on younger audiences, and the Jovem Pan news network broadcasts mainly news during all programming, as well as sports according to the schedule.

The programming carried by Joven Pan Radio consists mainly of news programmes, which the station has recorded since the 1970s and began to invest in forms of mass journalism.

During the last technological renovation of the regional studios in Curitiba (Brazil), the technical management of the company has decided to choose the AEQ FORUM IP digital console as the heart of the studio, due to its robustness, ease of operation and modular design. AEQ FORUM IP is a mixing console designed for ON AIR broadcast control. It incorporates all the basic features necessary in this type of environment: automatic monitor cut, cough cut, faderstart, signalling control, control signals for the automation of external equipment, management of external communications, intercommunication, etc.

AEQ FORUM IP is perfectly adapted to different scenarios: self-monitoring, control-locutory, television production controls, sound production, mixed configurations, integration in large installations, etc. Simplicity and control power are combined in the AEQ FORUM IP console to cover both basic and advanced operation needs. They can be equipped with AoIP multichannel input and output cards compatible with the new AES67 protocol through DANTE™ technology. Through this connectivity, signals can be picked up and delivered to other consoles, routers, and other input and output terminal equipment from over 300 different manufacturers. It is also possible to choose MADI connectivity, and can be equipped with up to two internal digital telephone hybrids.