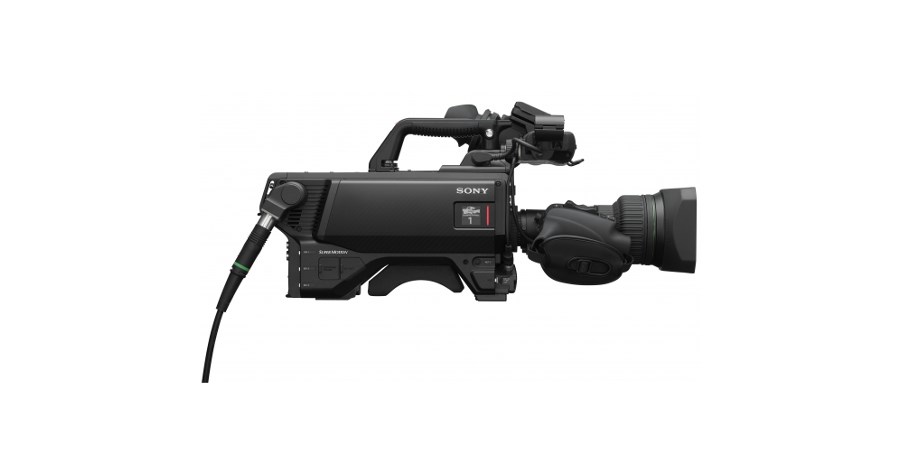 HDCU-5500 is a half-rack sized new camera control unit (CCU) used with HDC-5500. This CCU provides both 12G-SDI 4K output interface and IP interfaces, SMPTE ST 2110 and NMOS IS-04/05 by hardware option (HZCU-UHD35 for 12G-SDI 4K output interface and HKCU-SFP50 for IP interface, both are planned to be available in May). The combination of HDC-5500 and HDCU-5500 are connected by a single fiber cable without a baseband processor unit.  This pair also offers Ultra High Bitrate (UHB) transmission that transmits 2 channels of 4K signals at a time.

The HDC-5500 outputs a 4K signal directly from its 12G-SDI output. Installing a wireless side panel option, HKC-WL50, the HDC-5500 can be operated as a wireless camera as well as used with a camera stabilizer.

Using newly developed signal processing technology between the camera and CCU, the Ultra High Bitrate (UHB) transmission enables the transmission of two camera signals simultaneously by a single fiber cable, increasing the operational flexibility of the camera system. The 4K TRUNK feature efficiently transmits two sources from HDC-5500 to CCU; one source from the “host” HDC-5500 itself and a second camera connected to the HDC-5500’s 12G-SDI input. In addition, 4K PROMPTER is transmitted from the HDCU-5500 to camera head also utilizing the UHB transmission.

The HDC-5500 can utilize an interchangeable side panel which can ensure backward compatibility with current HD camera control units such as the HDCU-2500/3100 series.

“The HDC-5500 provides industry leading flexibility for live production,” said Theresa Alesso, Pro division president, Sony Electronics. “We’ve listened carefully to the requirements of this rapidly evolving market and provided new capability for today’s 3G systems and tomorrow’s IP-based and HDR requirements. We’ve elegantly addressed production needs such as 4K, HDR, HFR, IP, digital triax and wireless. We are providing our customers with a flexible and cost-effective path to upgrade their current systems to a very special toolset. We also continue to enhance our HDC series so that our customers can reach even higher levels of creativity and efficiency.”

Sony also introduced a portable licensing option for HDC-5500 and the HDC-P50 POV cameras. Portable licenses are not tied to a specific device like a permanent license. Portable licenses can be transferred dynamically between HDC-5500 and/ or HDC-P50 cameras. Customers such as OB and rental companies can save on costs and logistics since software capabilities can be downloaded and installed on site, rather than shipping camera components. Portable Licenses will be available as a yearly subscription.
Portable license: HZC-UHD50P for 4K output and HZC-HFR50P for High Frame Rate, both are planned to be available in May

The New HDCU-3500 and HDCU-5500 CCUs are planned to have an optional on-board recording capability utilizing a built-in memory feature (the release timing is to be announced). This innovative recording option will provide new options and flexibility for live production workflow.