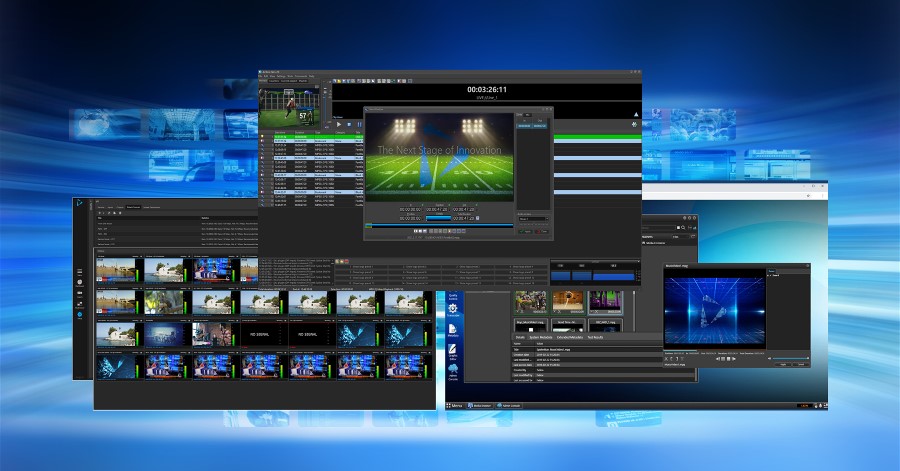 "It's wonderful to see the NAB Show back in Vegas after its two gap years," says Van Duke, PlayBox Neo US Director of Operations. "We have a good location at the front of the North Hall, just off the LVCC main entrance. A key element of our demo will be 4K-UHD which is gathering momentum worldwide as a high-end broadcasting standard. PlayBox Neo systems can be configured to provide full support for playout in 4K-UHD, HD and SD, including simultaneous transmission in multiple standards.

"We will also be promoting PlayBox Neo's support for IP control which empowers administrator-approved operators to work remotely via a secure internet link. This has long been a core feature of our systems, linking TV network headquarters with regional studios in other cities, states or continents.

"PlayBox Neo solutions are designed for channel branding and playout services of any size, from a single Channel-in-a-Box up to a multi-language global network. Their reliability has been confirmed over 22 years in more than 19,000 TV and branding channels. That inherent robustness can be augmented with any desired level of standby protection. Our systems can be server-based, SaaS-based, or both in a hybrid setup, enabling extra channels to be added at very short notice.

"From a workflow perspective, PlayBox Neo systems allow fully prescheduled automation while retaining the ability to adjust the playout schedule at any time before transmission, or switch to live input for urgent announcements or late-breaking news. Output can be transmitted over satellite, terrestrial or cable networks or direct-streamed via IP."

Making its NAB debut, PlayBox Neo's Capture Suite is designed to handle the ingest workflow of television networks, post production facilities and playout service providers. Operators gain the ability to control multiple ingest channels across multiple servers. Functions such as input selection, ingest presets, file-naming rules, assignments and auto-transfer can be performed quickly and easily from a single web user interface. Features include a multiviewer with black-frame and frozen-frame alarms plus loudness audio level monitoring as well as manual, scheduled and compliance ingest modes with automated input switching. Content can be now edited in Adobe Premiere and Grass Valley Edius Workgroup 9+ while ingesting. MXF and TS files being ingested are available for immediate playout via AirBox Neo-20 automation without having to wait for the ingest process to complete.

PlayBox Neo's Multi Playout Manager (MPM) broadcast playout monitoring and control system allows multiple AirBox Neo-20 channels to be operated via IP from any network-connected location. Latest-generation enhancements include an updated user interface and integrated playout preview. Optimized performance combined with fully integrated playout preview makes remote control and monitoring easier than ever. At MPM's front end is a revised user interface designed to match the UIs across the entire PlayBox Neo series. An integral editor can be used to create future playlists. MPM also provides support for custom metadata from AirBox Neo-20 and includes a library module for fast access to MAM. Media files can be drag-and-dropped from library to playlist or processed into multiple folders with custom metadata settings such as category and folder color. A supervisor can also custom-brand the MPM user interface with an organization’s or channel's logo.

An automated streaming and broadcast playout system based on 22 years of refinement, AirBox Neo-20 is designed to make TV content creation and management easy and stress-free. Available in 1U channel-in-a-box and 3U multichannel versions, it is suitable for local or IP-linked remote control. Playlist scheduling can be performed weeks ahead of actual transmission, media files finessed, rescheduled or integrated with live production, and playlists configured for 24/7 automated operation. Delivery across multiple time zones in multiple languages is supported. AirBox Neo-20 enhancements include GPU acceleration to achieve fast file decoding. Input/output configuration can be performed using a web-based resource monitor connected via a secure link. Automatic alerts warn operators of absent or frozen video feeds via a multiviewer. Picture-in-picture digital video effects creation and real-time loudness compliance are also provided. Transport stream and XDCAM MXF file clips can be played back while still being ingested. Enhanced connectivity capabilities include NDI input in addition to the existing compatibility with SDI, MPEG-2 TS and IP streams. NDI output is also now included, supplementing the existing SDI, SRT/UDP/RTP stream and RTMPS outputs.

PlayBox Neo will additionally be promoting Cloud2TV. Available on a SaaS subscription, this is fully compatible with existing AirBox Neo-20 playout infrastructure and can be used to extend both scale and functionality. Specific Cloud2TV applications are assigned to content ingest, graphic editing, media browsing with metadata handling and clip trimming, quality control and verification, transcoding, playlist management and audit logging. These can be closely coordinated to provide a full set of broadcast resources supporting the workflow of an entire TV channel. Cloud2TV is configurable for terrestrial, satellite or CDN-based playout under full IP control. It also forms a robust platform for secure media asset management and archiving, accessible by authorized operators anywhere in the world.