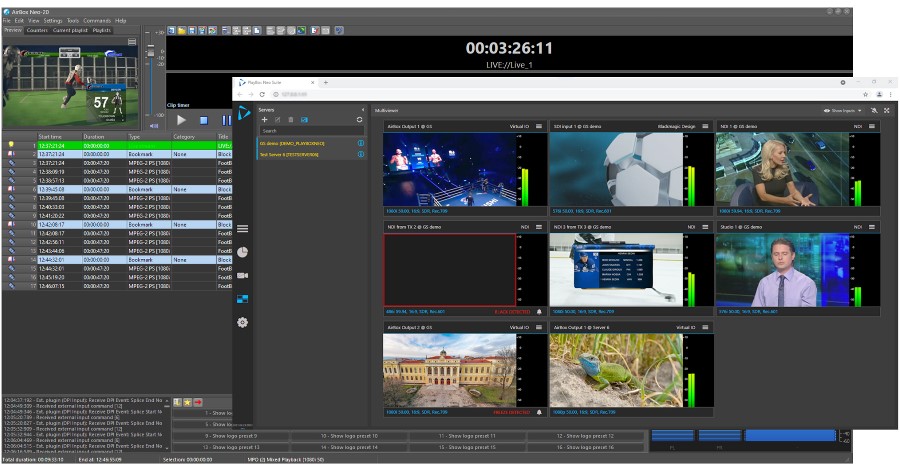 PlayBox Neo announces new additions to the operational capabilities and connectivity of its TV Channel-in-a-Box, AirBox Neo-20 and Capture Suite.

June 15th, 2021 - PlayBox Neo Channel-in-a-Box provides all the facilities needed to create and maintain single or multiple television channels within a seamless workflow for local or remote control. Based on AirBox Neo-20 playout automation, the system can be configured to any required scale from optional elements such as Capture Suite media ingest, TitleBox Neo-20 interactive character generator and graphics, and ListBox Neo-20 scheduling. Terrestrial, satellite, cable and IP-streamed transmission are all fully supported.

AirBox Neo-20 can be configured for round-the-clock automated operation on any scale from a regional station or corporate TV service up to a global network broadcasting to multiple timezones in multiple languages. Playlist scheduling can be performed weeks ahead of actual transmission while retaining the freedom to trim, edit or reschedule content or integrate with live production. Safeguards are provided to ensure uninterrupted operation if content files or even entire schedules are missing or conflicting timed events are present.

Six new features have been introduced:

- Transport Stream and XDCAM MXF file clips can now be played back while still being ingested, saving time as operators no longer need to wait until the ingest process is complete.

-  Picture-in-Picture digital video effects can be created within AirBox Neo-20.

-  Operators are now alerted to absent or frozen video feeds via a web-based multiviewer, allowing service interruption to be checked and corrected quickly.

-  Input/output configuration can now be performed using a web-based resource monitor connected via a secure link.

Capture Suite was developed for use within the UHD/HD/SD production workflow of television networks, post-production facilities or playout service-providers. It allows users to control multiple ingest channels across multiple servers from a single web user interface. Functions such as input selection, ingest presets, file-naming conventions, assignments and auto-transfer can be performed quickly and easily.

• Editing in Adobe Premiere and Grass Valley Edius Workgroup 9+ can now be performed while ingesting.

• MXF and TS files being ingested are available for immediate playout via AirBox Neo-20 Automation without having to wait for the ingest process to complete.

• A web-based multiviewer with black and freeze frame alarms is now included.

"Our Channel-in-a-Box system has developed into a world leader supporting more than 18,500 TV and branding channels in over 120 countries," adds PlayBox Neo CEO Pavlin Rahnev. "It derives huge strength from 21 years of innovation powered by our highly experienced and talented development team. The latest advances are based on feedback from our loyal customer base around the globe, and from our SI partners working on new projects both for the broadcast mainstream and the expanding online sector. Operator efficiency is the key driver, allowing reliable round-the-clock playout. Scheduling, ingest, QC, video editing, promo-creation, graphics, news banners, tickers, prompter feeds and presentation are all handled within a unified user interface which is easy to learn and to operate."