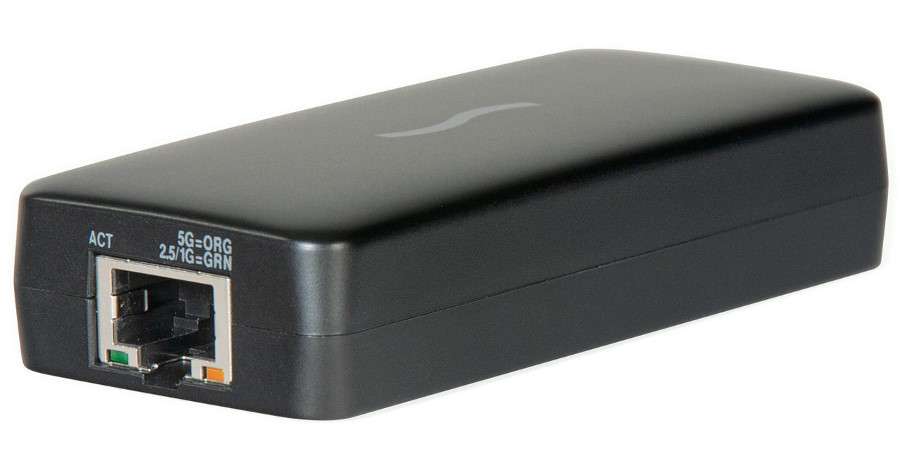 What It Does:
Measuring just 1.5 inches wide by 3.25 inches deep by 0.7 inches tall, the Solo5G is a compact, fanless 5 Gigabit Ethernet adapter for Mac®, Windows®, and Linux® computers. Equipped with an RJ45 port, the adapter supports 5GbE and 2.5GbE (aka 5GBASE-T and 2.5GBASE-T, respectively) connectivity via common Cat 5e (or better) copper cabling at distances of up to 100 meters. The adapter's USB port connects to a USB-A, USB-C, or Thunderbolt™ 3 port on the computer and is bus-powered for convenient, energy-efficient, and portable operation.

Why It's Important:
The demand for faster network speeds is at odds with the fact that Cat 5e and Cat 6 copper cables — representing close to 100% of the installed cable infrastructure in enterprises worldwide — were designed to carry data at only up to 1 gigabit per second. NBASE-T Ethernet was developed to boost the speed capability well beyond that limit. Sonnet's Solo5G takes advantage of that technology to offer users a simple and low-cost solution for adding faster network connectivity to computers equipped with USB ports, the most common interface available.
When used with a multigigabit Ethernet switch or 10 Gigabit Ethernet switch with NBASE-T support — including models from Buffalo, Cisco, Netgear, QNAP, TRENDnet, and others — the Sonnet adapter delivers performance gains — from 250% to 425% the speed of Gigabit Ethernet — without a wiring upgrade, saving organizations the expense of upgrading older infrastructure. When connecting to a multigigabit Ethernet compatible switch is not possible, the Solo5G also supports 1 Gb/s and 100 Mb/s link speeds.

How It's Unique:
Unlike other multigigabit adapters that include only one computer interface cable, Sonnet's Solo5G includes 0.5-meter USB-C to USB-C and USB-C to USB-A cables for connecting the adapter to the computer, saving users the expense of buying a second cable when needed. And, unlike other companies that require Mac users to open the Terminal application to enter commands to install drivers necessary to support the adapter with their system, Sonnet is the only company to have created a simple-to-use driver installer application that takes care of the process with ease.

When You Can Get It:
The Solo5G USB-C to 5 Gigabit Ethernet adapter (part number SOLO5G-USB3) is available now at the suggested retail price of $79.99.