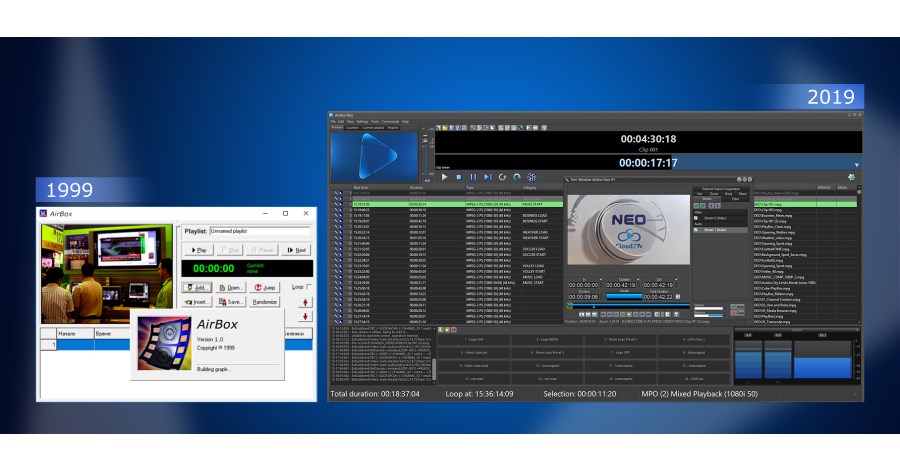 PlayBox Neo celebrates a landmark in its corporate development this October with the 20th anniversary of the first order for an AirBox broadcast playout system, purchased by TVSat and installed at the network's broadcast master control room in Bulgaria.

"AirBox allowed the entire process of playout and transmission to be performed efficiently and easily within a single compact unit, including the option of complete round-the-clock automation," comments PlayBox Neo CEO Pavlin Rahnev.

"When international distribution began in early 2002, the number of playout and branding channels choosing the product grew rapidly. The addition of the TitleBox interactive character generation and channel branding system caused the installed base to skyrocket."

"In the years that followed, a wide range of modules were added. Ingest, playlist preparation, content management, remote control, production playout, time delay and ad insertion, all became easy to process with practically any desired level of automation."

"AirBox proved both the operational simplicity and commercial efficiency of the server-based Channel-in-a-Box concept based on software modules running on an off-the-shelf PC-based platform which continues to be popular and successful to this day. Now in its Neo19 generation, it can be configured to match any scale and style of operation from a single branding channel right up to a multi-channel multi-language broadcast TV global service.

"The broadcast media industry has been transformed over the years by the transition from analog to digital technology which formed the basis of today's world of IP-based product virtualization. Our development team remains fully committed to providing the most effective and efficient solutions to match our customers' evolving expectations.