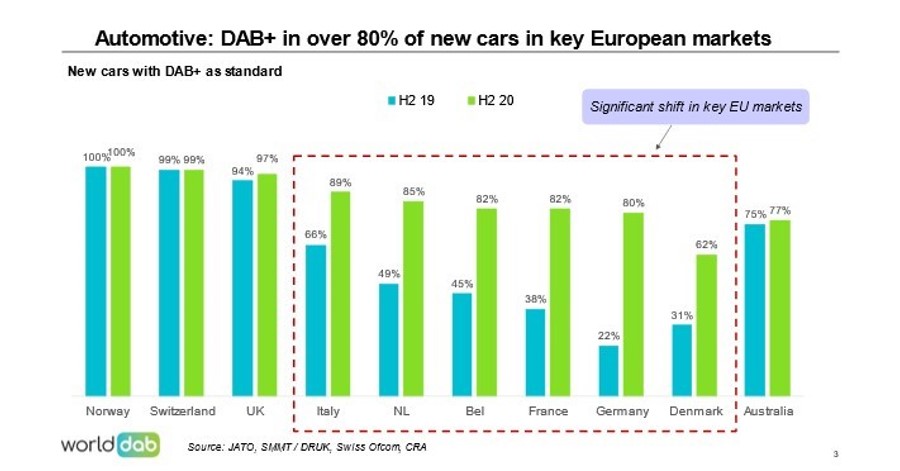 In the second half of 2020, over 80% of new cars in key European markets came with DAB+ radio as standard - a dramatic increase on the same period in 2019. This step-change reflects the impact of the European Electronic Communications Code (EECC), which, from December 2020, requires all new car radios in the EU to be capable of receiving digital terrestrial radio.

These figures were revealed in WorldDAB’s latest market report, published today to coincide with the organisation’s annual Automotive conference.

Patrick Hannon, President of WorldDAB, said: “These results demonstrate that DAB+ is firmly established as the core future platform for radio in Europe. The recent progress in Germany, France, Italy and Benelux has been particularly impressive – and reflects the high levels of co-operation between players across the radio ecosystem. Looking forward, our goal is to ensure that the key benefits of broadcast radio – being free-to-air, independent of gatekeepers and reliable in emergencies – remain at the heart of listeners’ automotive audio experience.”

The WorldDAB report also highlighted that, by the end of Q4 2020, nearly 100 million consumer and automotive DAB/DAB+ receivers had been sold in Europe and Asia Pacific – up from 92 million 6 months year earlier.

Key findings of the report

DAB+ is now in over 80% of new cars in key European markets, driven by the impact of the European Electronic Communications Code which came into force end 2020, as well as the expansion of DAB+ in key markets such as Germany, France and Switzerland where preparations are ongoing to switch off FM in 2022-2023.

The growth in receiver sales has been driven also by market forces: France will launch national DAB+ services in October 2021 (in France, DAB+ is already on air in ten major cities / regions), Germany launched a second national DAB+ multiplex for commercial radio in October 2020, and in the UK has seen DAB listening overtake FM for the first time.

Several EU countries – including Germany, France, United Kingdom and Italy – have already introduced regulations to implement the EECC directive into national legislation, while other countries – including The Netherlands, Belgium, Denmark, Sweden, Austria, Greece, Czech Republic, Poland, Spain, Slovakia and Malta – have initiated procedures to implement the EECC into national legislation.

Other highlights from the WorldDAB report include:

• In Switzerland, 73% of all radio listening is via digital platforms, and 41% of all listening is on DAB+. Switzerland has confirmed FM will be switched off by January 2023

• Nearly 47 million receivers have been shipped in the UK, with 67% of households having at least one DAB receiver

• In Italy, sales of consumer DAB+ receivers more than doubled in 2020 (up 126%) following the introduction of rules requiring all receivers to have DAB+ from 1st January 2020

The infographic details the rollout status in 24 emerging markets including information on trials and population coverage – not only in Europe but also in Africa, Asia and the Middle East. The infographic also gives a comprehensive overview of DAB receiver sales, road and population coverage, household penetration and the number of national stations on DAB/DAB+ compared to FM. The report covers Australia, Belgium, Denmark, France, Germany, Italy, the Netherlands, Norway, Switzerland and the UK.