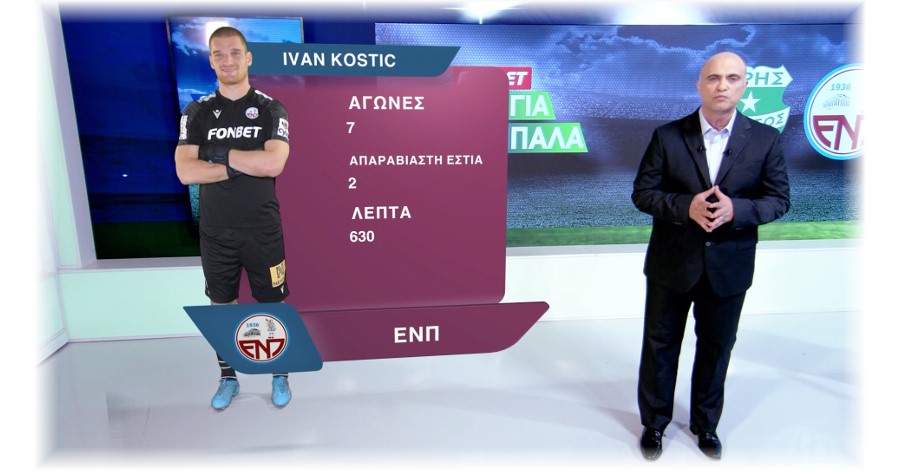 Football is a particularly important part of Cytavision’s offering, especially since Cyta is the main sponsor of the league, officially known as the Cyta Championship. Harry Panayiotou, Cytavision’s Head of Sports and Production Department , explains, “The new on-air graphics reflect our commitment to deliver quality content and exciting experiences to our viewers who are passionate about the game.”

Constantinos Heracleous, Cytavision’s Consulting Producer/Director, explains, “Cyta selected RT Software for their new broadcast graphics, following a formal tender process which allowed us to compare the offered systems objectively, ensuring that the successful vendor has the capability to deliver all of our requirements.”

“The viewers’ response to the new Tactic Pro graphics has been very positive”. Harry adds, “Cytavision broadcasts several leagues and we have used the new graphics on all of them - UEFA Champions League, Europa League, Europa Conference League and Cyprus League. There has been great feedback from our viewers.”

RT Software also worked with Cyta to develop the 3D virtual graphic assets needed for the studio. Justin Avery is RT Software’s Graphics Manager and explains that the process for the augmented reality objects involved taking existing branding and working up concepts for review by Cyta. “Once we had provided initial mock ups, the process went smoothly with good levels of communication. We discussed Cyta’s needs and expectations, and they approved their preference which we went ahead and implemented. It was a great example of collaborative working.”

Mike Fredriksen, RT Software Commercial Director says, “When competing against other vendors in a formal public tender we know it is going to be tough to win the business. But a successful sale of both Tactic Pro and Swift Studio to yet another highly regarded European sports broadcaster illustrates that we have some of the best broadcast graphics products on the market.”

RT Software is a leading worldwide provider of real-time graphics solutions. Its product set spans CG, template-driven graphic overlays, election and newsroom graphics, specialist sports graphics and virtual studios. From its beginnings as an off-shoot of the BBC 3D Graphics Department in 2004, it now has installations from Iceland to New Zealand, and its growing customer base includes the BBC, Sky Sports, Fox Sports, BT Sport and many other Tier 1 broadcasters.

Cyta, is the leading provider of integrated electronic communications in Cyprus. Making the most of its technologically advanced networks, it offers a wide range of cutting-edge services and solutions to meet the ever-increasing demands of its residential and business customers for voice, data and content. It sustains a pivotal role in the digital transformation of Cyprus with the deployment of an island-wide, fiber-optic network and the continuous upgrade of its mobile networks. It advances and maintains subsea and satellite networks for international connections of strategic importance that have established our country as a regional telecommunications and connectivity hub in the Eastern Mediterranean.

Cytavision, is the most comprehensive subscriber TV in the Cyprus market, with a variety of sports and entertainment content on 100+ popular channels and the most live sports programmes. Cytavision offers the ultimate viewing and user experience, through its flexible packages, various interactive facilities, the Cytavision Go app for smartphone, tablet and laptop, the ability to watch football matches on a pay per view basis and the big video on demand library of movies and TV series for everyone.