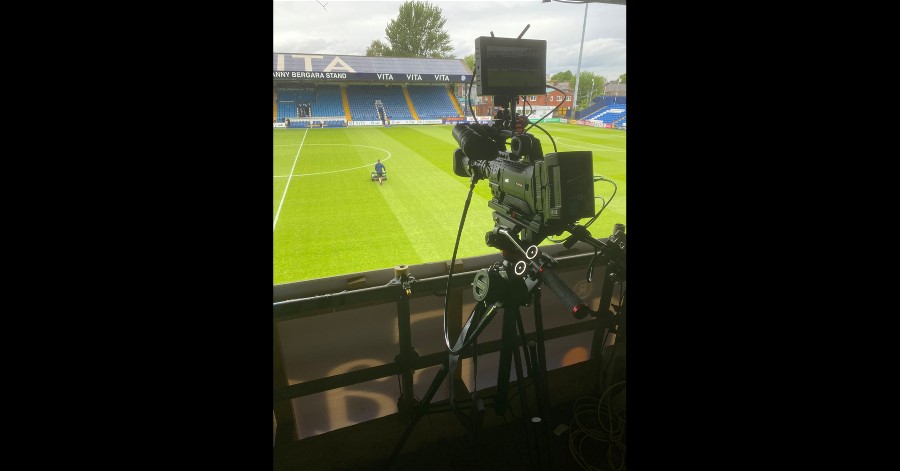 CJP Broadcast Service Solutions Ltd reports the successful completion of a live HD video production of the FA Women's National League Playoff Final. For the first time, the match was streamed live online globally by the BBC on the BBC Sport website and BBC iPlayer, bringing wider exposure for the third tier of women’s football in England.

Held on Saturday May 21st at Edgeley Park, home of Stockport County FC, the final was played between Southampton Women FC and Wolverhampton Wanderers WFC, respective champions of the FA WNL Southern and Northern Premier Divisions. The teams were contesting for the National League title and a place in the next season's FA Women's Championship. Southampton defeated Wolves 1-0 to secure promotion.

"We were commissioned by the FA to work with the BBC based on our proven experience in the sports sector," comments Sales & Marketing Manager Kieran Phillips. "This includes Step 2 (National League North & South) of Men's non-league in football and Tier 2 (Championship) in women's football. We were also commissioned by the FA to produce content around the FA Cup Semi Finals and Final for two years in succession. We deployed a complete transportable solution for the WNL Playoff Final, including four JVC cameras and a CJP Live Sports Production System. System operation was in the capable hands of our Technical Manager James Ruddock, with supporting technician Louis Shaw plus freelance No.1 & No.2 Camera operators Paul Farrell and Alex Queen. We also received very welcome assistance from Edge Hill University and Sunderland University students who in return gained important experience of working on a live OB project on contribution cameras 3 & 4."

Available in several versions supporting up to eight camera inputs, the CJP Live Sports Production System provides a wide range production and streaming capabilities. Its facilities include ISO recording, four-layer graphics, transitions, real-time replay, slow-motion replay, on-the-fly highlights creation, advert insertion, clip insertion and audio mixing. Operation is via a touch screen and keyboard with the option of an external joystick for pan/tilt/zoom camera control. Full multiscreen monitoring facilities are included with the option of a second screen for commentator positions. An H.264 live stream can be fed directly to a TV station or third-party OB control suite via a 10 megabits per second link or via 4G mobile, with the ability to simulcast to multiple platforms and in-stadium screens. Up to 96 terabytes of RAID5 storage can also be attached.

CJP Broadcast provides a wide range of services in the broadcast, corporate, education and sports sectors. These include systems integration, the design and construction of virtual production studios, live video production and streaming, and video-on-demand platform management with or without paywalls. A further CJP speciality is the digitisation and restoration of legacy cine and tape for media archiving. CJP additionally offers video and audio production equipment from leading brands selected on the basis of high quality, versatility and affordability.

CJP customers include national and regional broadcasters in the UK and overseas, government organisations, universities, corporate studio operators and sports clubs. In the sports field, CJP works directly with clubs, delivering both technology and live sports production. Also available from CJP is hands-on training in all aspects of media system operation, as well as technical support for new or legacy studio infrastructure.

Vizrt delivers advanced virtual set ecosystem to BBC Sport for a year of sport.
back to top