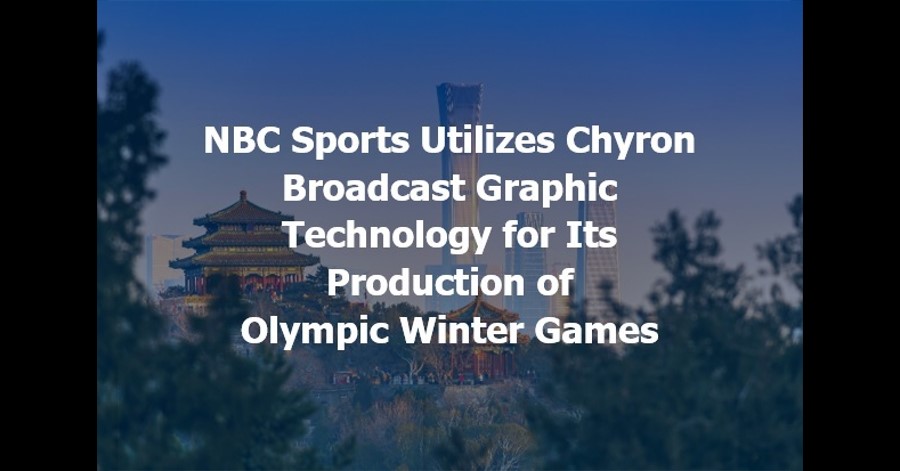 NBC Sports has selected Chyron to provide systems for live, on-air graphics with integrated data as well as systems to drive graphics displays to studio video walls for its production of the XXIV Olympic Winter Games, from Beijing, China, February 2-20. The announcement was made today by Darryl Jefferson, VP of Post Operations and Digital Workflow, NBC Sports & Olympics, and Ayhan Rob Ulke, Vice President of Strategic Accounts, Chyron.

NBCUniversal provides coverage of the 2022 Olympic Winter Games from Feb. 2-20, featuring a Winter Olympics-record 2,800+ hours of coverage across NBC, Peacock, USA Network, CNBC, NBCOlympics.com, and the NBC Sports app. The Opening Ceremony was presented on Friday, Feb. 4, live in the morning and again in primetime on NBC and Peacock. Similar to recent Winter Games, NBC’s primetime Olympic coverage began the night before the Opening Ceremony on Thursday, Feb. 3. Coverage began on Wednesday, Feb. 2, on USA Network and Peacock. NBCUniversal is presenting its 18th Olympic Games, 12th consecutive overall, and sixth straight Winter Games, all the most by any U.S. media company.

NBC Sports will utilize Chyron LyricX CG systems for live production in Beijing at figure skating and extreme sports venues, as well as in remote broadcast trucks based in NBC Sports’ International Broadcast Center in Stamford, Connecticut. Additionally, operators based in Stamford will use the Chyron PRIME Live Platform to drive content for studio video walls in Beijing.

“We again are eager to continue our partnership with Chyron for the Winter Olympics,” said Jefferson. “Use of the LyricX platform and further expansion of the PRIME Live Platform for studio and visual displays gives us continued flexibility and allow our visual artists to really stretch the creative boundaries during the Games.”

“NBC Sports’ production of these events are highly visual, engaging and inspiring to viewers,” said Ulke. “Chyron is proud to partner to bring world-class, data-enhanced graphics to augment the viewing experience.”

New deal between Nova and NBCUniversal.

ChyronHego at IBC2019.
back to top