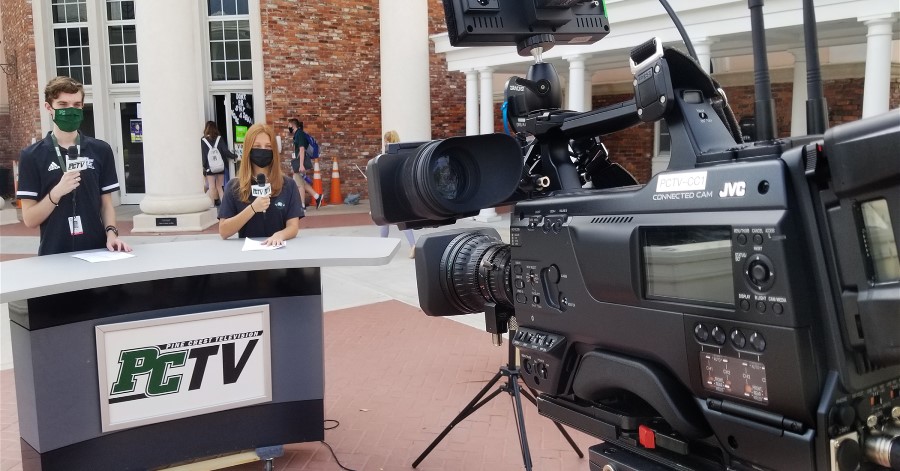 School’s Media Team Has Relied on JVC Equipment for Over a Decade.

Boca Raton, Florida, August 16, 2021 - As a premier provider of private education in Boca Raton and Fort Lauderdale, Florida, Pine Crest School prides itself on its superior curriculum balanced with immersive arts and athletics. Among the many services and programs offered to students is media production, comprising Pine Crest Television (PCTV) and Pine Crest News Network (PCNN), which operate from the Fort Lauderdale-based high school and two middle schools, respectively. To ensure its production services are of the highest caliber, the school has been utilizing equipment from JVC Professional Video, a division of JVCKENWOOD USA Corporation, for more than a decade. Most recently, the department added three JVC GY-HC900 CONNECTED CAM™ camcorders to deliver content to students and families, via Vimeo, on the school’s website and social media accounts.

This upgrade was due in part to a ramped up need for Pine Crest’s live sports production feeds amid the pandemic, and the school hopes to further its streaming capabilities by adding GY-HC500 CONNECTED CAMs in the new school year. With advanced streaming features and built-in SRT functionality, JVC CONNECTED CAM solutions offer the school a high-end approach to online production while still working off the limited bandwidth found within the schools.

“We love the added benefit of having the directional video, communications and streaming built directly into the CONNECTED CAM cameras,” says Dave Burgess, Director of Digital Media Production, Pine Crest School. “The increased quality and reduction in the amount of bandwidth needed, along with the ability to not have dropped frames on remotes, is really something; it’s very cool.”

Burgess further explains that the JVC equipment gives them the ability to broadcast from the athletic field on the school’s standard WiFi network. This makes it possible to broadcast through a non-dedicated access point, to which one or all three cameras can connect. That same access point then makes it possible for the control room team to see and manage the video. “Now, we don't have to drive our truck out there and pull fiber optic cable,” he says. “We avoid the long setup times typically necessary to do a production.”

The new GY-HC900 cameras will be used by staff and students for a mix of ENG and live production needs. They have been relegated for the upper-school PCTV students for use with live remote broadcasting, as well as for the school’s production services team to cover events, such as ballet and sports.

According to Burgess, the design ergonomics, consistency between cameras and ease-of-use of the JVC equipment is a beneficial feature for the students. “JVC has really created a true professional camera,” he adds. “No matter what camera you’re using, you can find the ND filter in the same place. You can find the focus buttons, the white balance, the gain – they’re all there. Even when you go down to something as small as the original 100, and then all the way up to the 900, all the buttons are in the same place. You can really teach students on one JVC camera and they will be able to pick up any JVC camera. From a teaching standpoint, that’s huge.”

The school has exclusively purchased JVC equipment over the past decade. Among the many JVC solutions that have been part of Pine Crest production facilities are a fleet of JVC GY-HM100, GY-HM170 and GY-HM710 ProHD camcorders as well as GY-HM200 and GY-LS300 4KCAM camcorders, many of which are still in-use today. The school also utilizes its JVC DT-X71Cl monitors in various capacities. In addition to the sports and education aspects of the Pine Crest productions, Burgess and his team also utilize the JVC equipment for various in-house communications requests, as time affords.

When it comes to student operators, another benefit of working with JVC is the company’s customer support. “The cameras are very well-built, but I have seen many dropped or mishandled cameras in my time,” he explains. “No matter the cause, I have always had a positive experience with the brand’s repairs department. It’s all very smooth and straightforward, and you have your cameras back in no time.”

Moving forward, Burgess hopes to incorporate the CONNECTED CAM solutions in more productions, to provide spectators with exciting live events as well as recorded materials. “We recently had a three-camera shoot of a ballet and were sending out a mixed program from our TriCaster while simultaneously ISO-recording in all three of cameras,” he says.  “We had the Fuji lens controls attached and JVC pro monitors on top. We got a really beautiful, three-camera recording, which I’m going to use to put out a polished program for the families.”

Established in 1934, Pine Crest School has been educating students aged four to 18 for nearly 90 years. The school sits on 65-acres of land across both of its campuses in Boca Raton and Fort Lauderdale, making it one of the largest private schools in the country.