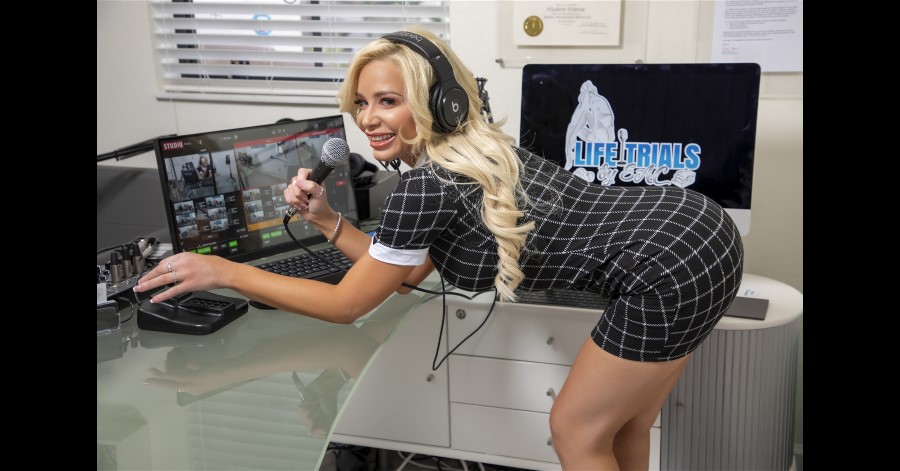 Montreuil, France - Dec. 15, 2020 - Elizabeth Charnay, an aspiring lawyer and politics enthusiast based in Fort Lauderdale, Florida, has selected multiCAM systems to help her easily create high-quality video podcast programs. Charnay, who also happens to be a Playboy centerfold model, took delivery of a multiCAM RADIO and STUDIO video production system in November. She launched her show, “Life trials by Elizabeth Charnay” at the beginning of December.

Charnay set up the multiCAM system in her small studio she is using to make the video podcasting program, the first of a series, which covers politics, modeling, and life's experiences in general. To tackle content creation, Charnay is also using a small AoIP Shure interface for her three mics, a console, and two mCAMII PTZ cameras with her MultiCAM video production unit.

“I wanted to create a video podcast but didn’t want to have to rely on someone putting a bunch of ‘bits and pieces’ together to make something,” says Charnay. “Then I found the multiCAM system and I knew it was perfect for my needs.”

Charnay says she chose the multiCAM solution for a number of reasons. One of the most important for her was the fact that it's easy to use. She's not a technical person but wanted to be able to control and create shows without having to hire additional personnel. “It’s important that I am able to concentrate on creating compelling content instead of worrying about video and audio configurations. I need to be able to focus on my guests and our discussions without having to deal with the technical aspects,” she explained.

Since she's just starting out in podcasting, her budget was limited, so she had to find a way to produce top-quality video coverage without a producer or camera operator. That means the entire workflow needed to be automated and easy to use for even non-technical people. “My goal is to have the podcasts look just as professionals as shows that have a producer, and that when people see my videos, they see quality and are truly engaged.”

Mary Seidler, multiCAM's representative in the United States, traveled to Florida to help Charnay get up to speed with the new multiCAM gear. It took just a day. "It was interesting to see how fast the learning curve really was with a less technical person than say a typical radio engineer,” says Seidler. "Even if Elizabeth doesn’t have a video or audio background, she figured out how to run the system immediately, and she loves how easy it is to use.”

Charnay says she felt that multiCAM understood exactly what she wanted: Equipment able to produce professional content without hiring extra staff. She adds that multiCAM also "spoke her language,” and didn’t talk down to her just because she's not a techie. "It's great, she says,” referring to the fact that she can now create high-quality video podcasts alone.

"multiCAM has brought my dream - to create a really professional looking show - to life,” said Charnay. "Mary and the entire multiCAM team went above and beyond. They helped me learn the system, install it - I really appreciate their efforts.”