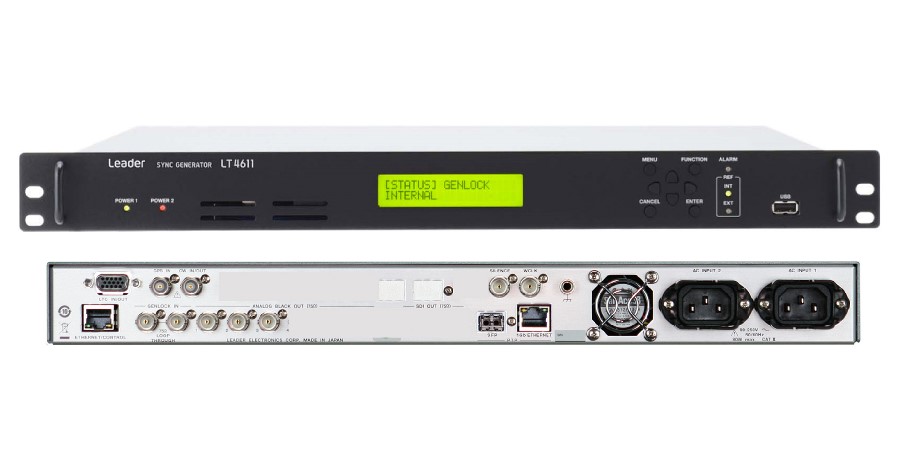 Leader Electronics announces a new addition to its portfolio of broadcast test instruments and signal generators. Designed for use in both SDI and IP infrastructure, the LT4611 is a 1U full-rack-width generator producing analog video sync, audio word-clock signals and SMPTE ST 2059-2 profile.

"With the increasing adoption of SMPTE ST 2110 standards, broadcasters are facing new challenges when integrating their IP and legacy SDI infrastructures, not least in the area of video timing," comments Leader Europe Business Development Manager Kevin Salvidge. "SMPTE ST 2110 makes the distribution process asynchronous by removing timing information from the underlying hardware layer. With current broadcast formats, the video must be frame-synchronous at the camera sensor and the viewers' display device. The intermediate IP distribution network is asynchronous but the variance in packet jitter directly affects latency, leading to potentially longer video and audio delays than are normal in SDI infrastructures. Although uncompressed video such as that provided by SMPTE ST 2110 does map to the active video parts of SDI, two major changes have occurred:  First, the precision timing protocol and black and burst / tri-level sync SDI references need to be derived from the same sync generator. Second, the sync generator needs to be designed to respect the timing requirements of SDI whilst supporting PTP requirements."

The new LT4611 sync generator builds on Leader's 67-year experience in the video and audio domain while providing an ideal and cost-effective entry point for broadcaster IP deployment deployments. Based on the established and proven LT4610, it has a lower entry price point giving broadcasters the freedom to select the features they need as the industry progresses from SDI to an increasingly IP-dominated world.

As well as providing both a 10 GbE and 1GbE PTP interface, the LT4611 comes as standard with three independent synchronized analogue black and burst outputs. This overcomes the challenges of requiring both IP and SDI timing references. The LT4611 also supports a stay-in-sync function which maintains the phase when GPS reference is lost, plus a slow-lock function to reduce quality-of-service issues that occur when genlock is restored.

All LT4611 functions can be managed from the front panel or remotely. Up to 10 preset configurations can be saved within the generator for later recall. The LT4611 can be started with the same settings each time. Logo data and preset data can be written to and recalled from plug-in memory devices via a front-panel USB port.

Dual power supplies are built in to maximize operational security. If an error occurs in one of the power supplies, its status light on the LT4611 front panel changes from green to red. A power supply alert can also be output via SNMP. The LT4611 incorporates a real time clock which backed up by a battery so there is no need to reset the clock even when the power is turned off and on.

The new instrument is supported by three LT4610-compatible hardware options and four LT4611-specific hardware options which can be selected to suit current operating environments. Additional options can be purchased when required.

Hardware option LT4610-SER03 is designed for use in IEEE 1588 Ethernet IP environments. It can be used in combination with LT4610SER01 (GPS option) or as a standalone grand master.

LT4611-SER23 can output a 48 kHz AES/EBU signal synchronized with the video stream. It can also generate AES/EBU silence.

The LT4611 video and audio sync generator plus its full supporting range of options are available now.