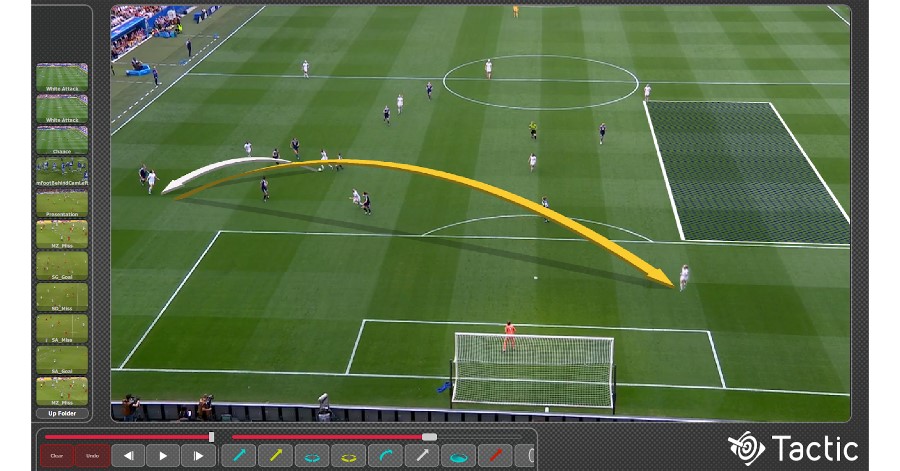 London, 20 February 2020 - Tactic Lite shares the same range of 3D graphic tools as the rest of the Tactic range but with a workflow designed for even faster turnaround on a low budget. When graphics are added to a clip of sporting action from the Lite interface, a pause point and graphic-off point are automatically added. The auto key function allows the graphics to be placed in true 3D, on the playing surface but behind the players. RT Software says that with no need to edit in/out points or motion paths of graphics, getting quality graphics to air is even easier than before. As well as its own telestration capabilities, one of the key use cases for the budget-friendly Lite product is interactive clip playback by the presenter using tablet or touchscreen control.

Tactic Pro, the flagship product in the range, sees new features added such as line tracking, animating virtual players and multicam workflows. The multicam functionality not only allows switching between two camera views of the same piece of action but also to create a ‘Morph’ where the camera view animates from one angle to the other. When only one camera angle is available, the user can create virtual camera movements to view the action from any angle.

Mike Fredriksen, Commercial Director of RT Software, said, “We realised by listening to the market that users of low cost telestration systems no longer wanted to be constrained by 2D graphics. Tactic Lite addresses this by providing the same high-quality graphics across the range regardless of budget. The Camera Morph functionality of Tactic Pro delivers the toolset expected of a high-end product while maintaining an affordable price point. With a version for every application and budget, the Tactic family is now complete, and we will continue to listen closely to our users to add even more exciting and ground-breaking functionality in future releases.”