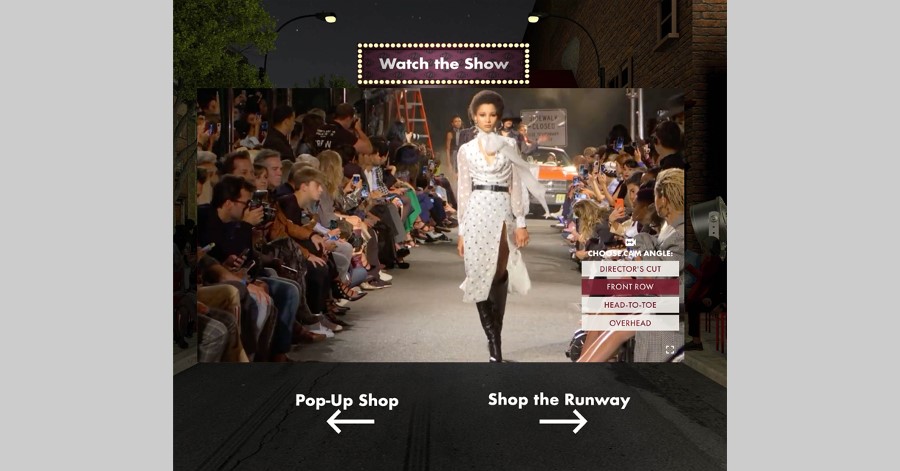 Imagine you have front row seats to the Tommy Hilfiger show at New York Fashion Week, one of the industry’s biggest, most exclusive events of the year. You are so close to the runway that you can count the polka dots on a model’s dress. Not only that, but you also have alternative runway views and backstage access. Now imagine you can do all of this with only a smart device or computer.

While Tommy Hilfiger showcased a ‘70s-inspired collection for the upcoming season, the designer’s online multi-camera webcast was anything but retro. Thanks to the Matrox Monarch EDGE encoder’s ability to receive multiple HD feeds and composite them into a pristine quad-split stream, and B Live’s innovative user interface that allows for seamless switching between multiple camera views, adoring Tommy Hilfiger fans got to have their own show credentials just like fashion industry VIPs.

During the autumn show, viewers visited the Tommy Hilfiger website to watch live webcasts from the Apollo Theater in Harlem. On the website, live event production company, B Live provided runway, overhead, and head-to-toe views of the models as isolated feeds, as well as a director’s cut that the company produced on-site.

In order to give fans a seamless viewing experience, B Live needed an encoder that could accept four discrete HD inputs and deliver a single 4K stream as a quad-split composition. Before the company purchased its Monarch EDGE H.264 encoder, its user interface did not allow viewers to watch multi-camera video with continuity. Instead, the player would need to buffer each new camera angle selected by the user before the video would become available for viewing. “The Monarch EDGE has allowed us to update our player to provide seamless switching on the user interface,” said Jay Kopelman, Director of Digital Engineering for B Live. “Before we got the Monarch EDGE, every time the viewer switched camera angles, it loaded a new independent stream. Because we can now do quad-HD streams with Monarch EDGE, we can feed a single 4K stream into the player – which is why the switching is so seamless.”

During the show, viewers could get an exclusive first look at the next season’s hottest designs by visiting the Tommy Hilfiger website. The B Live user interface gave Tommy Hilfiger fans the chance to feel as if they were at the Apollo Theater runway by allowing them to select from and switch between three different isolated camera angles or the director’s cut – all thanks to the robust and dynamic H.264 encoding capabilities of Monarch EDGE.

B Live’s camera crew captured each angle separately. Four 1080p30 video streams, including three isolated views and one director’s cut that B Live produced on-site, were sent back to the B Live office via satellite. There, Monarch EDGE received the feeds and encoded them into a single 4K, 20-Mbps stream that was then sent to the B Live platform. On the B Live user interface embedded in the Tommy Hilfiger website, fans were able to easily decide which part of the show to follow from the three isolated feeds available in addition to the director’s cut – all from their mobile devices, laptops, or desktop computers. These viewers – numbering over 500,000 – were also able to watch the show live on Tommy Hilfiger’s Facebook, Twitter, Instagram, and YouTube channels.

The must-have encoder for this season and beyond

Monarch EDGE’s ability to encode four 1080p30 video feeds together into one 4K stream has made B Live’s work of bringing best-in-class, live, multi-camera event footage to viewers across the globe more feasible than ever. During the Tommy Hilfiger show, viewers of B Live’s interactive user interface enjoyed seamless, buffer-free switching between multiple camera angles. “The experience is a lot smoother from both a technical and viewer perspective – clearly,” said Kopelman. Thanks to Monarch EDGE, fans had the chance to see and shop Tommy Hilfiger’s latest collection first-hand without leaving home.