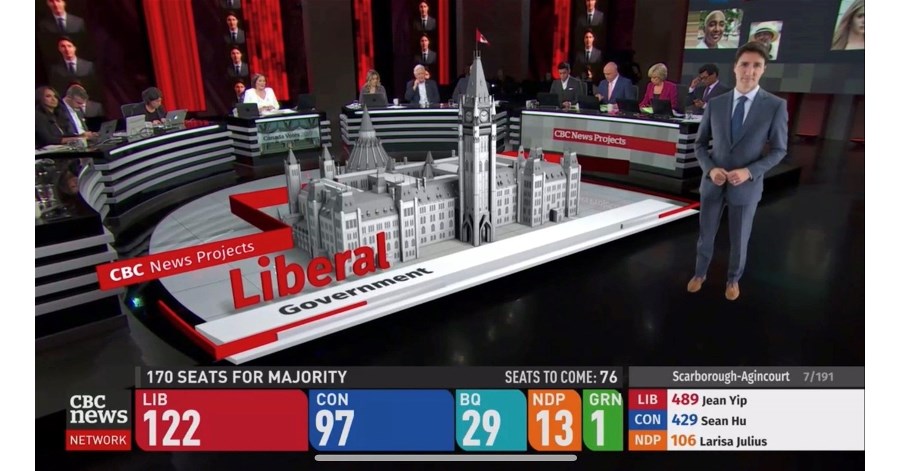 Being part of the story is one of the best ways to explain it.

Graphically speaking, the Canadian Broadcasting Corporation (CBC) pulled out all the stops for its coverage of this year’s Canadian Federal Elections. Using augmented reality (AR) effects and 3D animations, the results spoke for themselves with many media pundits (and viewers) seeing the CBC’s election graphics to be the most visually appealing and educational of any Canadian network that night.

The company responsible for those dynamic graphics was Astucemedia (based in Montreal), a long-time graphics production partner for the CBC, and powered by Vizrt, the world’s leading innovator of software-defined visual storytelling products.

“Our team’s goal was to transform the set with fresh, new designs that leveraged the latest graphics production tools and real-time graphics systems from Vizrt,” said Alex Leclerc CEO of Astucemedia.

On the live set during Canada’s election night, a series of AR charts—generated from live voting data —as well as dynamic animations displayed on the floor of the studio were employed to allow heretofore-impossible physical interactions between TV presenters and the on-air graphics themselves; making for a stunning display of information as it came in real time. 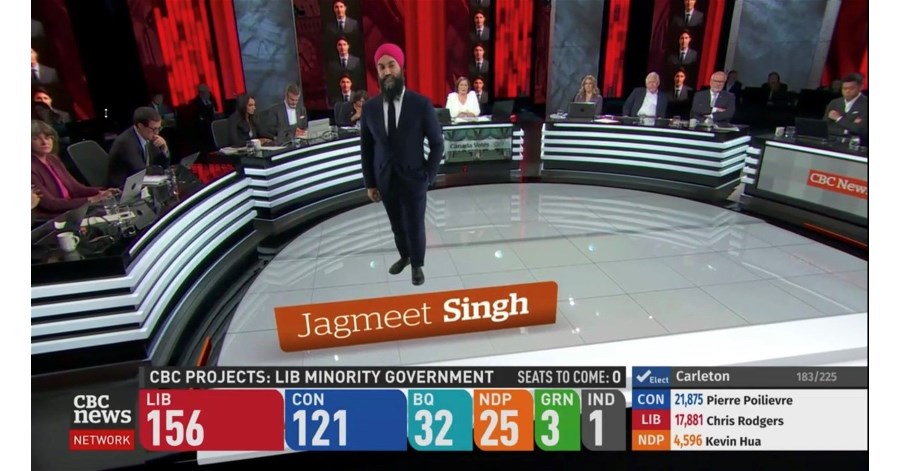 “Our powerful graphics products, including Viz Engine, are used by tier-1 broadcasters from all around the world to present information in an engaging way. To see the CBC and Astucemedia use our technology platforms to this effect and with such positive feedback from the Canadian audience, reinforces to me the power of software-defined visual storytelling for the modern audience of today and tomorrow,” said Daniel Nergard President of Vizrt Americas.

The Astucemedia team used the Vizrt technology to tightly integrate the graphics with the physical set; including displaying an animated parallax effect from the LED floor, driven by Astucemedia’s custom graphics design.

“Putting the graphics at the center of the on-air discussion makes them more important and integrated in the flow of the show,” said Leclerc, CEO. “We did not want to make it too gimmicky but really focus on how best to visualise the data, tell the story and be attractive to watch. It’s a fine line we have to walk, but for the CBC’s Election Night coverage everyone involved thought it was a complete success.”

Those graphics tools included Viz Artist, a template-based graphics production application used to create the 3D graphic look and the floor animations; and three Viz Engine rendering systems, which were used with specialized camera tracking technology from Stype to synchronize and display the AR graphics on set. Together they helped create the highly immersive scenes that provided viewers with better context for the incoming election results.

“AR helps tell better stories. Basically, broadcasters have learned that placing presenters within an AR environment is more organic and more visual. Being part of the story is one of the best ways to explain it,” said Alex Leclerc, CEO of Astucemedia

Vizrt Americas supports customers all over North and South America with their election coverage, and have always proudly been a trusted partner for broadcasters during elections, including the last 2016 US election where every major American broadcaster used the reliable and innovative Vizrt systems to cover the event.

Daniel Nergard has recently appointed Eduardo Mancz, previously Head of Sales, to be the new Senior Vice President of Vizrt Americas. He will continue to drive growth in the region for the Vizrt brand, helping Vizrt to stay focused on its core mission in the region of sales and operations execution and customer satisfaction.

Mancz, with his history of customer focus and wealth of industry knowledge, will lead innovation in the Americas, guiding broadcasters in their development of their Vizrt studio ecosystems.