EBU: Smart displays reduce the value of producing in HFR. 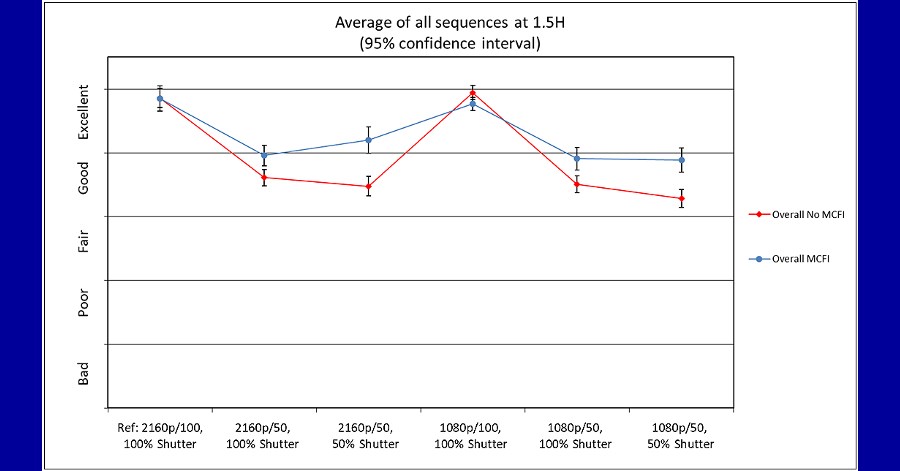 There are multiple ways to increase the technical quality of audio-visual content. Producing video with a larger number of frames per second is one of them. Currently most EBU broadcasters originate live content in 50 Hz, either interlaced with an effective framerate of 25 Hz, or as 720p/50 with 50 full frames per second. For rapid motion this is not enough, as fast-moving object or camera pans typically lead to blurred images or produce strobing shutter effects.

We know from BBC research that, in order to produce content with no visible artefacts at all, the 'ideal' framerate would have to be very high – several hundreds of Hz in fact. Such ultra-high frame rates aren't currently a realistic option, but what about more modest targets, such as 100Hz? A growing number of TV sets with panels capable of displaying 100 Hz natively are appearing on the market, and the latest professional cameras are up to the task as well. Does this make 100 Hz content production a good option for broadcasters?

How high is high enough?

To be able to say whether 100 Hz production is worth the extra effort and expense, the first step is to determine how much better 100 Hz footage can look. To evaluate this, the EBU and IRT (Institut für Rundfunktechnik, Germany), with additional help from the BBC and Italian broadcaster RAI, organized two subjective evaluations of sports content recorded in 2160p/100 at the European Athletics Championships 2018. The results of the evaluations, which took place in 2019, were since presented at several EBU events and are now available as EBU Technical Report 050 – Subjective

The findings show that, on a 5 point scale, HFR can look up to 1.5 points better than 50p content. But they also show that more than half of such a gain can also be achieved with normal 50p content and image processing done in TV sets. This weakens the case for broadcasters to invest in 100 Hz production. And just to be clear: while theoretically achievable, 100 Hz production isn't actually a feasible and affordable alternative for broadcasters yet, not least because there is still a lack of 100 Hz capable professional UHD HDR monitors. There are also still open questions about the best way to encode and distribute HFR content – a topic which is being worked on in DVB, for example.

An important long-term question is how much higher High Frame Rates would need to be in order to deliver improvements that can't be achieved in other ways. It may be that this sweetspot can be reached with TV sets that are capable of displaying 200 Hz based on a 100 Hz signal – for now we cannot say, nor test the assumption, as 200 Hz UHD HDR displays aren't on the market yet. As soon as they appear, you can expect a new series of EBU tests.

DVB and HbbTV Technologies in TV Systems.
back to top