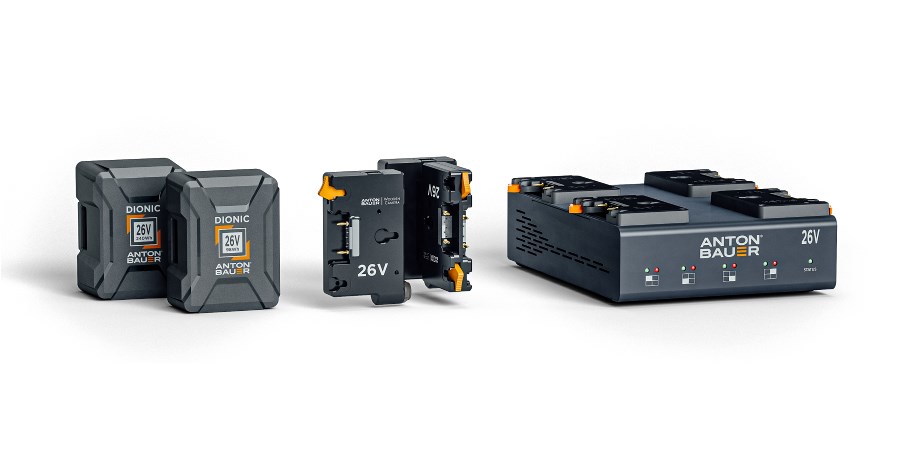 Cinematographers Can Power Their Entire Shoot With Options for 26V Cameras and LED Lights.

The DIONIC 26V series has been designed to drive high-power cinematic cameras such as the ARRI Alexa LF, SXT, and 65, and will also support mobile power for popular LED panels, including Litepanels' Gemini Soft panels and ARRI's SkyPanel series. With their lighter weight and more compact form factor, the DIONIC 26V batteries offer greater mobility for camera operators and more versatility for LED placement over tethered power sources such as AC or block-style batteries. DIONIC 26V batteries can be used as a hot-swappable backup power solution for gear that is using AC power, such as VCLX block-style batteries, eliminating the need to power down cameras or LEDs to change power sources.

The DIONIC 26V charger offers rapid charging for both 14.4V and 26V batteries — charging the 98-watt-hour in around 1.5 hours and the 240-watt-hour in around 3.5 hours — a sharp contrast to competing dual-voltage or hybrid batteries that require as much as two to three times this amount of charge time. The DIONIC 26V series also offers a dual-bracket solution that enables up to 480 watt-hours of power (combining two DIONIC 26V 240 batteries), delivering many hours of untethered lighting power for LED panels.

Like the other batteries in the Anton/Bauer DIONIC product family, the DIONIC 26V series features ultra-high-strength ABS polycarbonate blend construction that protects the battery and ensures peak performance even in the most demanding conditions — including extreme heat, humidity, and cold. The battery's native 26V configuration balances cell usage and reduces the number of circuit boards packed on top of the cells for reduced heat and maximum cycle life. As a result, the batteries can be recharged many more times than other batteries for superior return on investment.

The DIONIC 26V's built-in LCD indicator gives users the confidence to know, down to the minute, the exact runtime and remaining available power for the camera and accessories being powered. In addition, the DIONIC 26V series introduces an all-new Gold Mount Plus mount that not only ensures a durable and secure battery connection, but also prevents users from connecting a 26V battery directly to a 14.4V camera or accessory. The DIONIC 26V 98 watt-hour battery is IATA-certified, making it easier to pack, carry, and transport on an airplane than tethered, block-style batteries.

"As the newest addition to our highly popular DIONIC family, which includes the award-winning VCLX and Dionic XT, our new DIONIC 26V series expands Anton/Bauer's outstanding reputation for delivering reliable and versatile mobile power for demanding cinematic productions. Our rental partners are now able to provide a single solution for customers to power their entire shoot, including power-intensive LED lights and high-end cine cameras," said Chris Gaughan, Anton/Bauer product manager. "The DIONIC 26V series is a perfect example of Anton/Bauer's continued commitment to engineer and deliver effective solutions that meet the workflow requirements of cinematographers around the world."