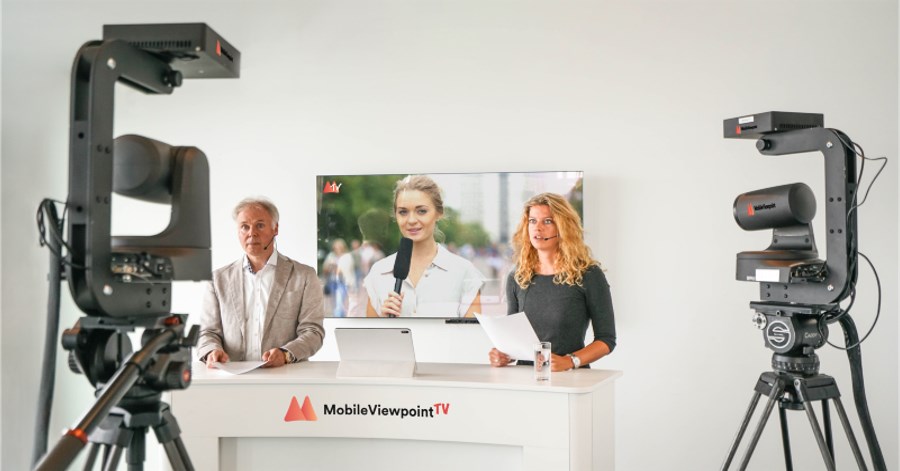 Alkmaar, The Netherlands – 05 September 2019 - Mobile Viewpoint, a leader in IP contribution solutions, today announced significant new features for its VPilot live production platform. VPilot uses artificial intelligence to automate live productions and is now available in two specific configurations – a ‘lite’ version which consists of three cameras, aimed at lone reporters and bloggers, event productions, and “visual” radio shows, and a ‘premium’ version which consists of up to 10 cameras, supporting studio and live event coverage. VPilot gives automated productions even greater depth and flexibility. VPilot also now features voice recognition as a means of automating overlays based on who is speaking.

The ‘premium’ configuration effectively operates as a stand-alone studio that can be set up anywhere, supporting up to as many as 10 PTZ cameras which automatically point to those speaking – for instance news anchor or guests – by using AI algorithms to analyse audio, voice recognition, auto-cue and 3D sensor inputs.

Voice recognition technology on both configurations can be used to automate insertion of name tags and captions, or insert overlays, for example for participants joining a live broadcast by phone.

Both VPilot configurations are complemented by Mobile Viewpoint’s VPanel. VPanel is an automated studio control box that supports the seamless and full automation of studio productions. VPanel allows the user to train the system through manual direction and makes it possible to intervene when a shot is not meeting the desired outcome of the production. It also offers full control of the rundown functionality – which can be changed on the fly by the presenter or editor – and supports switching to external feeds in the field, Skype connections and other video feeds, as well as video and graphics overlay.

“Consumers’ insatiable demand for content is driving new use cases – from “visual” radio programmes that show presenters and guests live on air, to newspapers whose reporters take to the streets to interview experts and video live events as they happen,” said Michel Bais, CEO of Mobile Viewpoint. “With our latest updates to our VPilot solution, we make it possible for everybody to be their own news, TV or radio channel, giving them the tools they need to create professional productions. VPilot increases the flexibility and reduces the costs associated with content production – and with unique features like AI and automated script run-down, the solution is able to bring a whole new world of live TV to consumers.”

Mobile Viewpoint Competes in the Space Race for Live Streaming.

Mobile Viewpoint launches Trolly Live – camera in a box for remote live streaming.
back to top