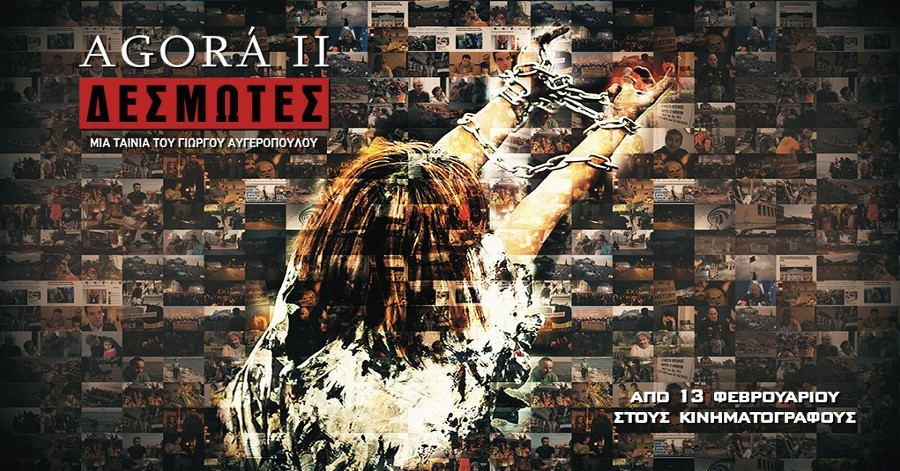 The new film by Yorgos Avgeropoulos, AGORÁ ΙΙ – Chained, is a profoundly human film with elements of a political thriller which depicts the last five years of the Greek crisis. Key assets of the film are the exclusive behind-the-scenes camera access during the negotiations between Greece and its creditors and the long-term observation of its protagonists.

The film, which has already received positive reviews by Greek media, begins its cinematic release in Greece on Thursday February 13, 2020 and will be included in the program of Thessaloniki Documentary Festival 2020. The participation of AGORÁ ΙΙ – Chained in renowned international film festivals, as well as its release abroad, is going to be announced soon. Stay tuned!

For four and a half years, between 2015 - 2019, acclaimed filmmaker Yorgos Avgeropoulos observed Greek society on multiple levels. As well as having exclusive access to Prime Minister Alexis Tsipras and Finance Minister Yanis Varoufakis, he followed others, including a refugee couple from Syria and a mother whose child was murdered by Golden Dawn. The result is a unique and multiple story-lined film: a tale which evolves and unfolds with the characters over time as they face difficult decisions, even to partially achieve their goals.

Avgeropoulos is the only filmmaker to have had behind-the-scenes camera access during the negotiations between the Greek government and its creditors in the dramatic first half of 2015. This allows him to fill-in crucial missing pieces in the puzzle of those days, actions that were so decisive in re-shaping the European political landscape. The remarkably frank comments he elicits and the political scenes he captures changes our perspective on what really happened.pha;τρό.

But above all, this is a profoundly human film. A cinematographic mosaic of a modern Greek tragedy, posing critical questions regarding the future of Avgeropoulos' country, as well as Europe's.

PIRATES OF THE AEGEAN - Title of the 3rd Episode: Fire in the Cyclades.
back to top