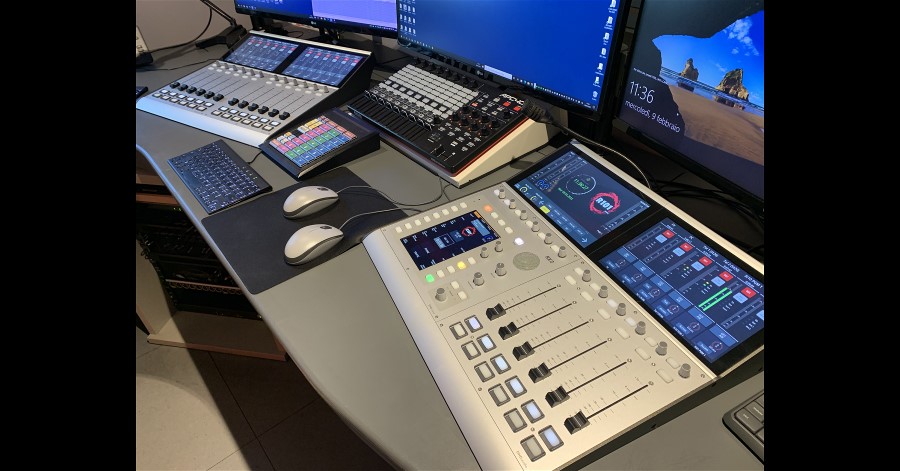 Mediaset SpA, one of Italy's most active media groups, has invested in DHD audio mixers for its Milan-based R101 (www.r101.it) radio and TV broadcast service. Transmitting via terrestrial digital and online, R101 is fully focused on music and entertainment including performance-related news. The project was supervised by DHD's Milan-based distribution partner BVmedia SRL. It centred on the modernisation of R101's technical facilities to increase operational efficiency and upgrade signal quality.

"DHD's RX2 and TX mixers were chosen for their operational versatility, ease of set-up and customisation, plus their impressive combination of signal quality, reliability, space efficiency, robust build and price. They were also the logical solution in terms of ergonomics because the integral menu displays on DHD mixers give operators fast access to the parameters they need at each stage of their production and post workflow."

DHD's RX2 is based on two modules – central and fader – which can be combined and configured to match a wide range of radio and TV production environments such as on-air studios, main control rooms and OB vehicles. RX2 configuration scales easily from small production units with 6 or 12 faders to large consoles with up to 60 faders. Each module has a dedicated high brightness 10.1 inch touch display. Supported character sets include West European, Arabic, Burmese, Chinese, Cyrillic, Hebrew, Japanese, Khmer, Korean, Tamil and Thai. The central module provides the most important audio I/Os plus a direct microphone input and a stereo headphone output. Loudspeakers can also be driven directly from this module. Assignable hardware buttons are provided in the central section. With adaptive labels in the 7 inch vertical touch display, these allow fast and tactile access to important mixer functions such as monitoring and talkback. RX2 modules are designed for easy maintenance and economic power consumption (25 watts maximum each). An included chaining kit allows physical connection of fader modules.

DHD's TX is an ultra-compact tabletop touch-screen mixer optimised for daily operation wherever space is at a premium. Typical applications include news desks, edit suites and communications link vehicles. Just 256 mm wide, 58 mm high and 272 mm front-to-back, the TX has a 10.1 inch IPS LCD monitor with capacitive touch-screen faders plus six hardware pushbuttons and two assignable potentiometers. Other features include an XLR microphone input, an XLR/6.3 mm jack combination headphone output, an integrated talkback microphone and a loudspeaker. A single network cable up to 100 metres in length connects the TX to a DHD processing core or concentrator. The cable transmits all audio and control signals plus power.

Mediaset SpA (www.mfemediaforeurope.com) is the holding company of the leading Italian companies in terms of audience and advertising market share in the commercial television sector. It broadcasts three of Italy’s biggest generalist channels and has an extensive portfolio of free and paid thematic channels, both linear and non-linear, and OTTV. It specialises in the production and multi-platform distribution of entertainment, TV drama, films, news, sports, multimedia content, and the sale of advertising. In the radio sector, RadioMediaset is the leading group in Italy in terms of ratings through five of the main national broadcasters.

BVmedia SRL (www.BVmedia.it), based in Milan, was established in 2010. It offers products, solutions and services to the radio broadcasting, television and new media markets. Its engineering team is composed entirely by professionals with a combined 30 years experience. The company offers first-hand expertise of providing technical support to radio and television stations, helping identify and acquire important partnerships with the industry’s best brands. Customer trust in BVmedia is a priceless heritage which continues to grow in value. Obsession with perfection is the company's guarantee.