The integration developed by Telefónica Servicios Audiovisuales includes an AoIP network with 5 workstations, and a reporter system with Talent audiocodec.

The Pontifical University of Salamanca (UPSA) is a private Spanish Catholic University, founded in 1940, with campuses in Salamanca and Madrid.

Communication faculty was founded in 1988 and offers degrees of Journalism and Audiovisual Communication.

The Faculty of Communication's vocation includes not only offering reference training, but also developing it in state-of-the-art facilities, with the latest technology and available to everyone to guarantee learning.

With this objective, they operated analogue radio studios for years, based over AEQ BC300 mixers.

And when the time has come for the technological update of today's equipment, they have turned to a benchmark integrator, especially in Spain and Latin America, Telefónica Servicios Audiovisuales, which has developed the renovation project in collaboration with the Systems Engineering Department of AEQ.

The installation consisted of a 12-channel AEQ Forum IP console in its main studio, AudioPlus automation system in its five studios and the integration of a Talent Audiocodec.

The Project is based on the use of IP cabling with Dante audio over IP protocol. To do this, two networks have been created, the first, for control and audio files, which joins the five audio stations of the AEQ AudioPlus radio automation suite and its server, and the main control port of the console, with supervision and maintenance computers.

A second network transports the audio over IP between the stations of the AudioPlus suite and FR14, the audio input and output card of the Forum console, that sends from the console to the network and receives from it up to 32 audio channels. To maintain adequate network separation, an additional network card has been installed in each Audio+ computer, to which the virtual card application Dante Virtual Soundcard, also installed in the Project, delivers the audio. Routing is done through the Dante Controller App.

The main element, the one that gives character and features to the studio, is the 12-channel Forum IP console. 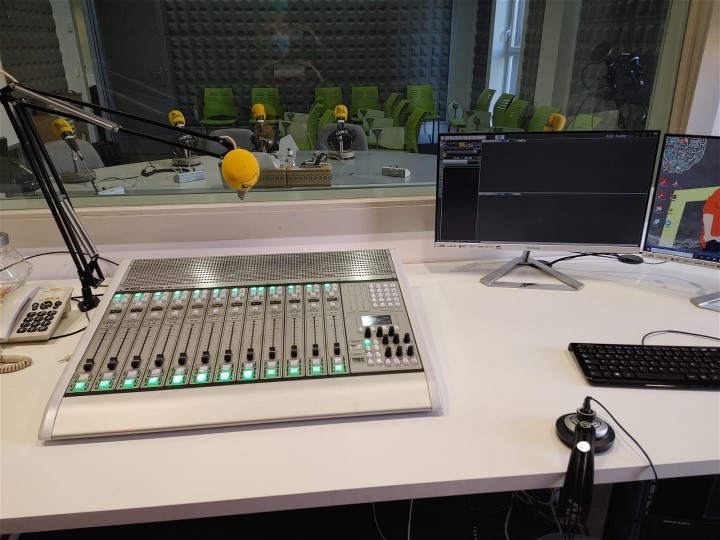 With a modular design and small size, it adapts perfectly to different scenarios: self-control, booth-control, television production controls, sound production, mixed configurations, integration in large installations, etc. Simplicity and control power are combined in the AEQ FORUM IP console to cover both the most basic operating needs and the advanced ones. The FORUM IP version comes with the modular engine integrated in the chassis that supports 3 quad fader modules and a control and monitoring unit with outputs for control and studio speakers and headphones.

In this Project, it is equipped with a multi-channel AoIP input and output card, compatible with the AES67 protocol through DANTE™ technology. Through this connectivity, signals can be collected and delivered to other consoles, routers, and other input and output terminal equipment from more than 300 different manufacturers. In this Project you can receive up to 4 stereo channels from each of the automation system terminals.

It is also equipped with two internal digital telephone hybrids for communications through the conventional telephone network.

In addition, the installed composition has 8 microphone inputs, headphone outputs, 12 analog line inputs, 8 analog line outputs and 4 AES/EBU stereo inputs and outputs. The existing equipment in the studio, such as microphones, headphone amplifiers, control and studio speakers, recorders and readers of different formats, signaling system, etc. where connected to these inputs and outputs.

The Project was completed with an outside broadcast system, made up of an AEQ Talent audiocodec for personal use as an external unit, and an AEQ Mercury as a studio unit.

About the Pontifical University of Salamanca, its Training Project and its degrees and courses, visit www.upsa.es

RADIO NQ MEXICO continues to rely on AEQ audio consoles for its studios.
back to top